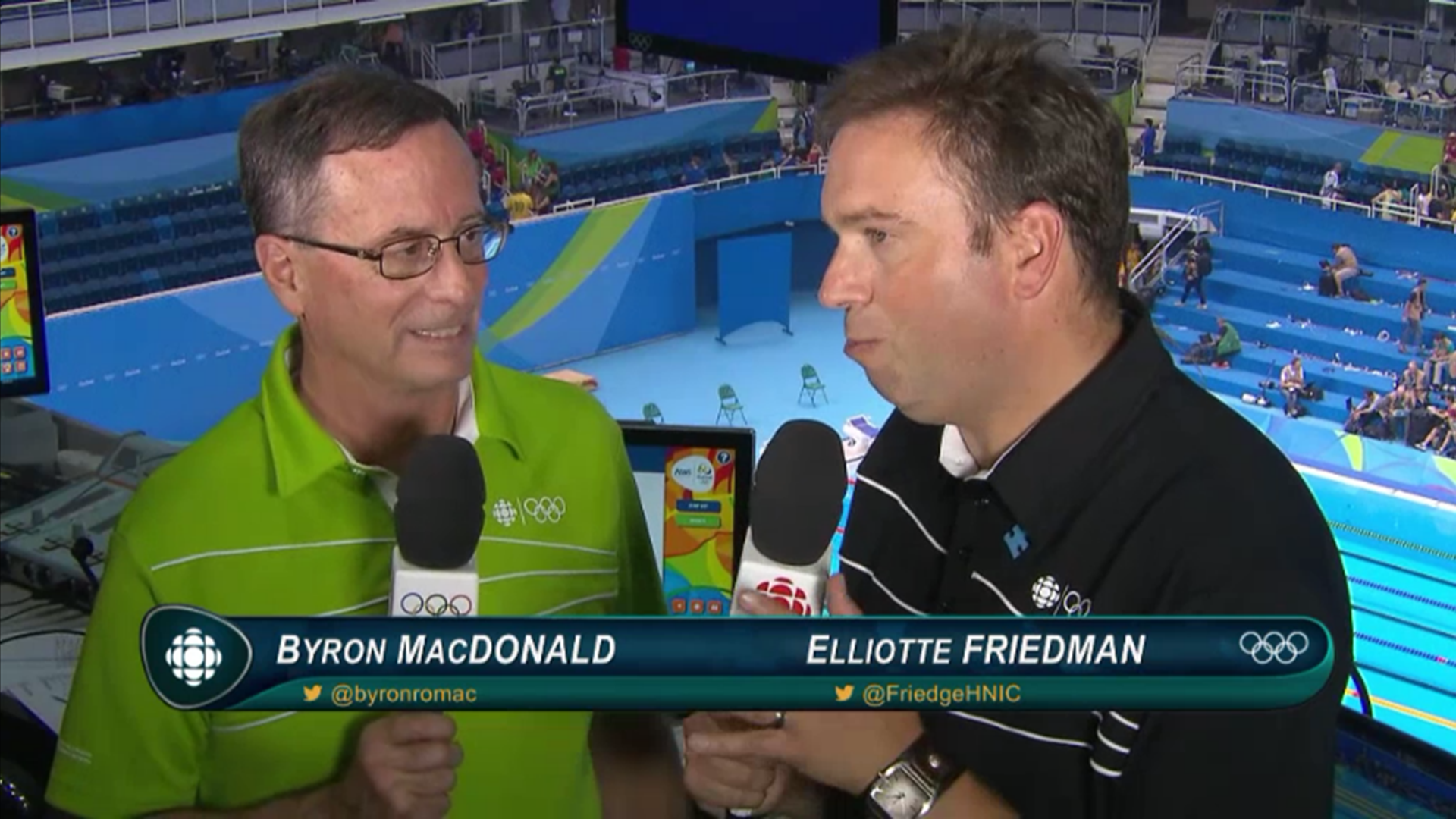 Canadian Broadcasting Corporation swimming announcer Elliotte Friedman (who’s only doing that job thanks to Steve Armitage having to pull out late over health concerns) made a substantial gaffe Thursday, mixing up the lanes of Ryan Lochte and Michael Phelps during the 200-metre IM gold medal race and falsely announcing that Lochte had won before realizing his mistake and apologizing profusely. After on-air apologies, Friedman also offered an apology on Twitter:

I'm sorry everyone. I blew it. No excuses

What’s really interesting, though, is the amount of support and positive feedback Friedman received in the wake of that tweet:

Here are some of the other positive tweets to Friedman, from people both inside and outside the broadcasting realm and from people around the world:

.@FriedgeHNIC Be kind to yourself, we've all effed up. I've been marvelling at your calls with #ByronMacDonald all week…

@FriedgeHNIC You're still the best in my books. Chin up, Elliotte.

@FriedgeHNIC Elliote. We've not met. But we heard from all in Canada how amazing you are. Such an easy mistake to make. You'lll ride again

@FriedgeHNIC don't even worry about it! Athletes make mistakes all the time too, we're all in the same boat. ❤️

@FriedgeHNIC Live TV is hard, partner. No one gets through a career unscathed. New day.

@FriedgeHNIC it's ok man. Trust me. Your self worth and career isn't measured on a swimming event. Your family loves you. Canada loves you.

While there were some critical tweets, others even jumped in to defend Friedman from those people:

@ctsbulls I would respectfully disagree. He will always be remembered for both blunders tonight. Ruined them for me and my family.

@ScottSmathison @ctsbulls you and your family need hobbies. Get a life. Enough kicking a man when he's down.

Despite all the praise, though, Friedman still isn’t making excuses, and he’s particularly annoyed about the less-viral mistake he made in the subsequent race when he initially confused Canada’s Penny Oleksiak with another Canadian swimmer, but eventually recovered and did the very hard job of getting the call of her tying for gold right. He spoke to Sports Illustrated‘s Michael Rosenberg Friday and said he would have quit if he hadn’t straightened that one out by the end of the race:

“If I didn’t say that she’d won the gold, I would have been on a flight this morning and I would have gone home. I would have quit. There’s no question in my mind.”

“If I hadn’t gotten her getting the gold, I would have quit in the morning. No doubt. No doubt.”

“I don’t know. You can’t deliver that performance on this stage. You can’t. It’s not acceptable. It just isn’t.”

…He still doesn’t remember calling the Oleksiak race. It was the biggest swimming event of the Olympics for his viewers, and it’s a blank space in his mind. He knows he nailed the call of her getting gold, but he is still stinging from botching her name in the middle of the race.

“I am more embarrassed about that one than I am about the Phelps one,” he says. “That’s a Canadian moment And I f—ed it up.”

Friedman is 45. He is not here by accident; he earned this assignment over many years. But he sits in Olympic Aquatic Stadium and says, “I feel today like I’m starting over.

“Everything I do, I have to work on it to make sure that I don’t do that again. Basically, that’s a message: Nothing you did before was good enough. You better find a way to make it better now.”

He re-dubbed the Phelps race for future airings, but he asked producers to keep the old one. Someday, he will watch it. He has studied the best franchises in sports, and he has learned: You succeed by breaking yourself apart after you fail.

Friedman deserves credit for his prompt and thorough apology, and for his willingness to improve. By all accounts, he has been doing a strong job calling both swimming and diving in Rio for the CBC, and that’s particularly impressive considering that that change in assignment (he was initially going to do sideline reporting) came only just over a week before the Olympics. His mistakes were significant, but a couple of mistakes shouldn’t ruin a career, and Friedman has a strong track record of journalism in print and on-air, especially when it comes to hockey. It’s positive to see so many people chime in with support for him, and maybe that should happen after more announcing mistakes. Announcers are human too, and it’s good to see a lot of viewers here recognize that. It’s good to see Friedman resolved to continue improving, too, but he should be careful not to be too down on himself. Viewers have forgiven him; now he needs to forgive himself.