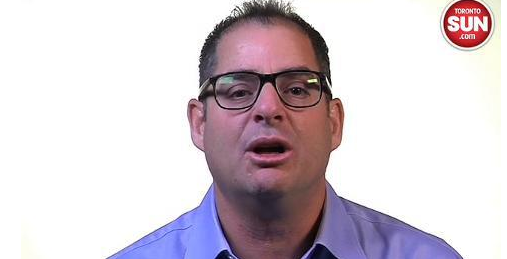 Steve Simmons knows how to stir up controversy.

The longtime Toronto Sun columnist posted a piece on Thursday, where he wrote Toronto Raptors players Cory Joseph and DeMarre Carroll were seen at a Cleveland casino at around 2 AM, the morning before their Game 5 Eastern Conference Finals 116-78 blowout loss against the Cleveland Cavaliers. Simmons said the players put their reputations at risk by the late night visit.

“This may have had nothing to do with how or why the Raptors were decimated and embarrassed 116-78 again by the Cleveland Cavaliers in Game 5 of the Eastern Conference final. But it makes you wonder.

Why would DeMarre Carroll and Cory Joseph put their own reputations in question, possibly put their team in question, by being seen wandering around in the middle of the night?”

Simmons is no stranger to spotting players in places he thinks they shouldn’t be. Back in July of last year, he wrote a ridiculous column about former Toronto Maple Leafs forward Phil Kessel and his hot dog eating habits. It was a hit piece and there were plenty of questions about its accuracy. After it was pointed out the locations Simmons listed as Kessel’s favorite hot dog spot were false, Simmons said he stood by the column.

This time, Simmons is calling out Raptors players for being at a casino late into the morning before a big game they got killed in. It might seem like a tantalizing story, but it’s not newsworthy. As Sportsnet’s Eric Smith points out, the casino was attached to the Raptors hotel. Not only that, but both players showed up on time for their morning interviews. Toronto didn’t play until 8:30 PM, so the fact they stayed up until 2 A.M. in a casino attached to their hotel doesn’t seem like a big deal. But, Simmons constructed his column like the two players threw their reputations on the line by staying up kind of late.

Even Raptors head coach Dwayne Casey told Simmons that while he didn’t know the Raptors players were at the casino that it wasn’t why they lost, saying “This is the NBA, they’re grown men. These are grown men. These things happen.” Simmons wrote the optics of the situation weren’t good and that more should be expected of the two players.

The NBA world wasn’t impressed with Simmons’ column. Carroll told TSN.ca Simmons was trying to create a story where there wasn’t one. Caroll joked “I hope he got a raise for that story because I think he was fishing a little bit.”

Some of the biggest names on NBA Twitter also reacted to the piece.

Now THAT’S the look of a guy who’s wandered around a casino or two at 2 in the morning. pic.twitter.com/R8dsnB76qK

Carroll won and Joseph lost at the casino on Tuesday night, by the way.

UNIDENTIFIED REPORTER SEEN ABSCONDING WITH PLATE OF CHEESE AND CRACKERS AT 2:15. UNCLEAR IF HE RETURNED PLATE LATER.

If NBA player is in hotel room watching episodes of Game of Thrones at 1 or 2 am…how is that diff than being @ public space @ same hour?

Such a stupid non story

Simmons got the reaction he was looking for, but it doesn’t take away from the fact his column was a hot take to try to build up controversy after the Raptors got blown out. He’s not responsible for holding players accountable so to insinuate Joseph and Carroll just because they were in a casino past somebody else’s bedtime is shortsighted. I’d love to say he should know better, but cleary he doesn’t.