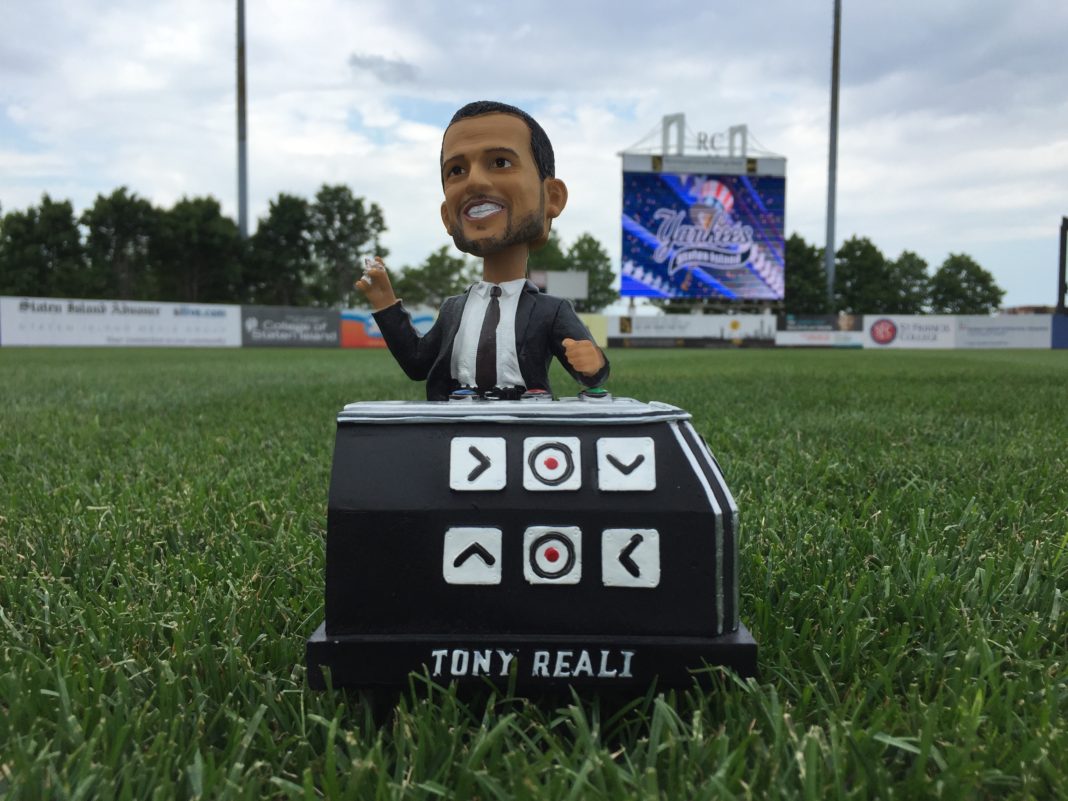 There have only been a few broadcasters immortalized in bobblehead form, and it’s even more unusual to see someone who doesn’t call games for the team commemorated this way, but that’s what will happen Saturday night when the short-season A ball Staten Island Yankees host the Tri-City ValleyCats in New York-Penn League action.

The Yankees will be giving out 2,500 bobbleheads of Staten Island native and ESPN broadcaster Tony Reali at his Around The Horn desk, captured midway through his famed paper toss. Reali will be in attendance to throw the first pitch and sign autographs as well, and told ESPN Front Row his family will be there in numbers to support him:

Who will be with you this weekend at the game?
We’ll be rolling 30 deep. Ma, Pop, Bros, Sis, Aunts, Uncles, Cousins, Cousin’s Cousins. And (daughter) Baby Francesca leading the way. Thirty Realis bringing the ruckus.

How are you approaching the first pitch?
A first pitch is a high-pressure situation. I’m gonna give a big wind up, look up to the sky like Fernando [Valenzuela, former MLB pitcher] and hopefully do what I’ve done a record 33 times in 2,707 tries with the Horn paper toss – throw a perfect strike.

Why’d the Yankees choose him? It comes down to the local connection:

“Our team is always looking for ways to recognize the people and products that come from Staten Island,” said Staten Island Yankees marketing manager Ian Fontenot. “With Tony being a native Staten Islander, the decision to reach out and create a bobblehead of him was a no-brainer. Being a minor league team, we also try to do things in a fun and unique way, so having him sitting at his iconic Around the Horn desk throwing balled-up paper rather than a baseball makes this a one-of-a-kind item for collectors.”

This is one of three bobbleheads the Yankees will be giving away this season, but the other two are of guys who used to play for them: current New York Yankees first baseman Greg Bird and current Toronto Blue Jays pitcher Pat Venditte (whose pro debut for Staten Island in 2008 wound up causing a rule change about switch pitchers). That’s pretty good company for Reali.

He does have a lot to live up to in terms of Staten Island Yankees promotions, though; last year’s Game of Thrones Night with George R.R. Martin was voted the 2015 MiLB promotion of the year. But, they have created a unique bobblehead for him (not many bobbleheads come with an Around The Horn desk!), and one he thinks is a pretty good likeness:

What do you think of your bobblehead likeness?
In my “Stat Boy” days [on ESPN’s PTI, I looked like [former Yankee] Andy Pettitte. This bobblehead kind of looks like Jorge Posada. I think it’s pretty solid but my barber wishes it had my fade.