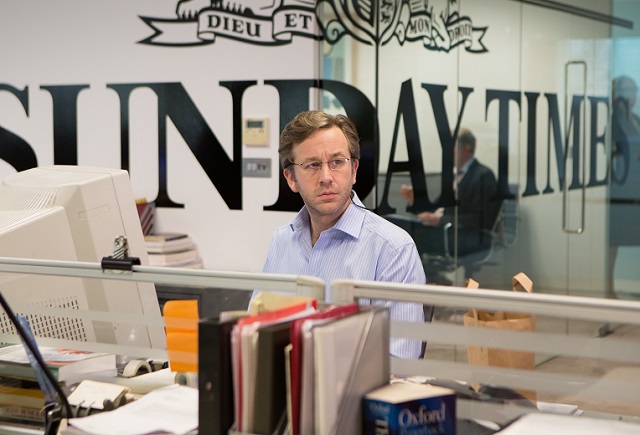 Director Stephen Frears said his Lance Armstrong film The Program was “a crime film,” and that approach may not have been possible if not for someone playing the cop, the person trying to catch the criminal in pursuit of justice.

In The Program, currently available On Demand and Digital HD, journalist David Walsh is essentially cast in that role as the one seeking to expose Armstrong’s cheating and deceit as the cyclist dominates the Tour de France, becoming a sports legend as well as an international icon, due to his work with the LiveStrong foundation.

Walsh is a sportswriter for the British Sunday Times who covered cycling and quickly discerned that Armstrong’s story was too good to be true, especially in light of doping scandals in the cycling world. Depending on your view, that either makes him the good guy or the bad guy in the story, but Walsh embodies the sense of right versus Armstrong’s sense of wrong in this story. The Program is based on his 2012 book Seven Deadly Sins: In Pursuit of Lance Armstrong.

Portrayed in the film by Chris O’Dowd (The IT Crowd, Bridesmaids), Walsh was intrigued by Armstrong early in his career and was charmed by the cyclist when first interviewing him.

“He was an underdog in the sense that he was so young,” Walsh told Awful Announcing. “He was only 21. He was riding the Tour de France, and 12 months before, he had been an amateur.

“I thought he had a tremendous charisma, unbelievable drive. He had kind of a straightforward honesty that made him a great interviewee. I came away from that meeting thinking — I spent about three hours with him – he’s a guy I’m gonna hear about. I didn’t think that would be the Tour de France. I thought it would be as a one-day racer.”

But as the film soon makes clear, Walsh’s admiration quickly turns to disappointment as his eyes and experience tell him that what Armstrong is doing, especially after recovering from cancer, just doesn’t seem possible, regardless of how great a story it is.

Really, Walsh’s fellow sportswriters should have been equally suspicious, given what had happened the year before Armstrong’s first Tour de France victory in 1999. French customs had stopped the manager of Team Festina, and his car was full of performance-enhancing drugs. From there on, authorities found drugs throughout the sport.

“My reaction was to say, I’m not believing these guys anymore,” said Walsh. “They now have to prove their innocence.

“When I saw what Lance did in ’99, I saw a Lance that hadn’t just come back from cancer in good health, he had come back as a rider transformed, able to do things that he’d never been able to do in the four seasons before he got cancer. I thought that was incredible, as in not being credible. All of the things that happened in that ’99 race made me very suspicious and I thought, before we applaud here, we have to know what we’re applauding.”

But as we often see throughout media, not just sports media, reporters, columnists and fans get caught up in the great story, putting their skepticism aside for what appear to be feats of excellence and movie-worthy narratives. (The home-run race between Mark McGwire and Sammy Sosa of 1998 comes to mind.)

“[My editor] called me and he said –  Lance had done a brilliant ride, he’s in the yellow jersey, he was dominating the race – he said, what a brilliant story this is going to be,” Walsh recalled.

Naturally, those who do put on their sunglasses and refuse to be dazzled tend to be labeled as jaded takedown artists, party-poopers who want to ruin everyone’s enjoyment.

“That lack of enthusiasm for Lance’s victory, though not openly accusing him of cheating, in all the writing I did in my 38-year journalistic career, that attracted the most vitriol and hostility from readers,” Walsh said. “I remember the emails and the letters and all of that, and everybody was utterly disgusted. Over the year that followed, the letter column of the Sunday Times was always filled with criticism for my questioning Lance.”

Walsh went on to write a book about his reporting on Armstrong’s doping, titled L.A. Confidential: The Secrets of Lance Armstrong, with French writer Pierre Balester that went to No. 2 on the French bestsellers list. The allegations against Armstrong made him a target for the cyclist and a pariah among his sportswriting colleagues (fearful of losing access and favor), as demonstrated by a press conference scene in The Program.

“People wanted to believe the story. Journalists are human, and this was a great story that made their readers feel good about life,” said Walsh.

“And the public definitely wanted it to be true. It was such a life-affirming story. But people started to embrace the irresponsibility of not knowing. It’s like they’re saying, I know there might be a truth out there, but please don’t tell me. I don’t need to know it.”

That sentiment arises repeatedly throughout sports, whether in the media or among fans. Don’t let the facts get in the way of a good story, as the saying goes. Fans might have blinders on because they just want to enjoy the games, as we see with the NFL and concussions or baseball and PEDs. Reporters and columnists might be unwilling to write the tougher story for fear of getting access taken away or having their relationships with teams adversely affected.

Again, The Program is currently available On Demand and Digital HD. You can read our review of the film here.