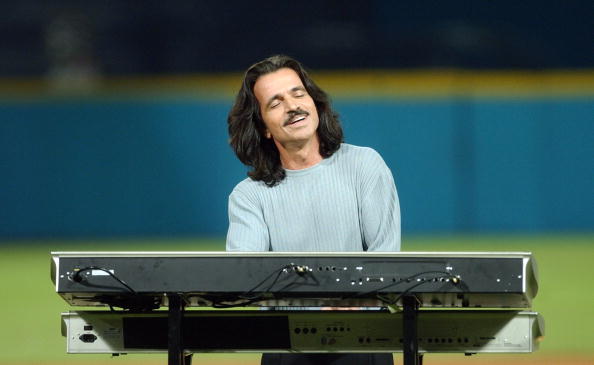 Specific theme music for sports events matters for many fans, as exemplified by 2012’s controversy about the lack of “Roundball Rock” at the Olympics, or the 2008 controversy about CTV/TSN buying the longstanding Hockey Night In Canada theme, or the regular controversies about Sunday Night Football and One Shining Moment. The latest move on that front is the news from Sports Business Daily that NBC will be bringing back Yanni’s “In Celebration Of Man” for their British Open coverage, which has some golf fans and reporters ecstatic.

British Open nugget from @Ourand_SBJ: Yanni is producing a new version of "In Celebration of Man" for the event: https://t.co/u4LbxZCDRW

The video is no longer on YouTube but NBC ended their USGA reign with @DanHicksNBC saying something like "we know you've loved this song..

so much so here it is one last time" while showing the pics of everyone who won a USGA title on their air. That was 2014. The song is back.

And some glowing commentary on it from a 2014 Alex Myers piece in Golf Digest:

The 2014 U.S. Open at Pinehurst marks the end of an era. No more Johnny at the national championship? Sad. But no more Yanni? You’re going to miss him more than you may realize.

Johnny Miller will be a focal point of NBC’s final broadcast of the U.S. Open and rightly so. But an overlooked aspect of the network’s coverage is the tournament’s unmistakable theme song, which was written by the famed one-named composer.

Titled, “In Celebration of Man” (how great is that?), the stirring/dramatic/beautiful/triumphant/regal/inspiring piece of music has accompanied the U.S. Open since NBC took over coverage for ABC beginning in 1995. You know, this one. Let’s all show some respect and pause for two minutes of sound. And then leave it on loop.

The Yanni theme was initially submitted to CBS as a possibility for their 1992 Winter Olympics theme song, but they passed on it and NBC picked it up, at first for their 1992 Summer Olympic preview show. They then made it the theme for their U.S. Open coverage from 1995 to 2014, with NBC golf producer Tommy Roy gushing over it to Myers:

“It’s been a perfect piece of music that really has branded I think the U.S. Open and all of the USGA telecasts on NBC,” Roy said. …”If you get the right one, I think it’s hugely important because it becomes a brand of the property in a way. If you think of the Olympics. You hear that music coming on the air and it just creates a mood and it creates memories and you know something really big is about to happen. And that’s the same way with ‘In Celebration of Man.’ You hear that music and you know this is the U.S. Open is coming on. You know it’s a big-time sporting event and it’s time to sit down and watch.”

At that time, Roy said he didn’t envision NBC using the theme for other events given its close association with the U.S. Open. That stance appears to have changed, and the new version will even include a nod to the British Open’s setting:

So, golf fans who like Yanni’s theme will be very happy about this decision. No word on if the Royal and Ancient will administer a stroke penalty to NBC for using a U.S. Open theme, though…