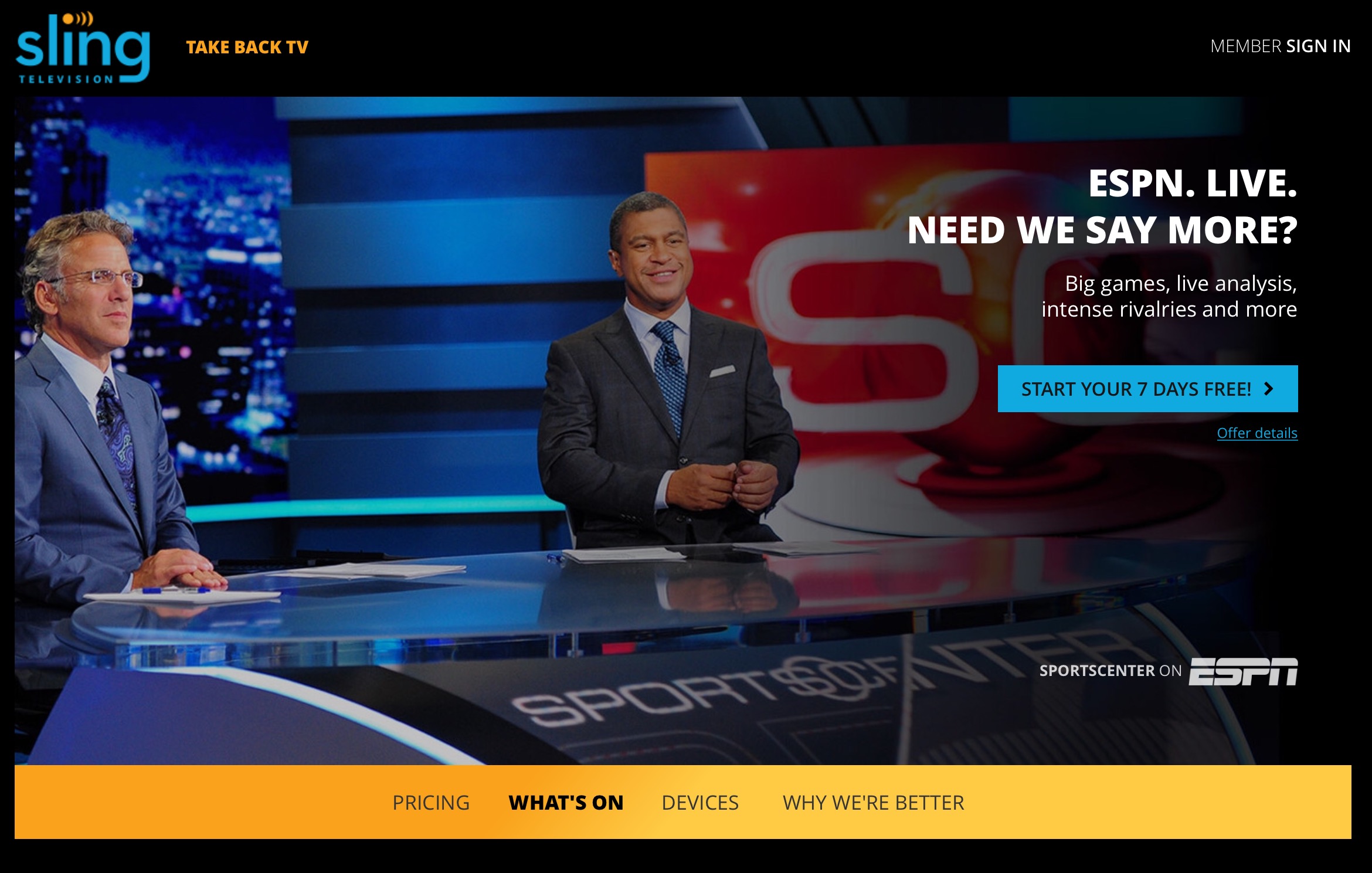 There are a massive number of live sports events broadcast by ESPN but not aired on a conventional TV network, rather placed on “ESPN3,” their term for events that are only available digitally to cable subscribers through the WatchESPN app on phones, connected TV devices and online at watchespn.com. Those events are going to get much closer to traditional TV for subscribers to streaming-TV provider Sling TV, which announced Wednesday that they’ll integrate ESPN3 digital content (for all subscribers) and SEC Network+ digital content (for subscribers to their $5 a month “Sports Extra” package) into their main programming guides:

Say goodbye to the times when you thought you may miss your favorite team because it wasn’t on TV, and say hello to ESPN3! An industry first, ESPN3 and SEC Network + will be integrated into the Sling TV programming guide making it fast, easy and convenient to watch your favorite college teams.

ESPN3 and SEC Network+ bring you thousands of live events annually. With two weeks down, college football is in full swing, and this year, Sling TV is bringing you more college football than ever before and best of all – at no additional cost! We know you don’t want to miss a minute of the action, which is why we launched ESPN3 in our Sling Orange core service at no additional cost, plus SEC Network+ into Sling Orange’s “Sports Extra,” still only $5 per month.

Before today, you may have watched ESPN3’s live sports content not aired on other ESPN networks through the WatchESPN app. Now you no longer need to switch to another app or TV input – you can find all of the ESPN3 action directly within the Sling TV experience. You can even find the game you want to watch faster by filtering available ESPN3 games by sport in the Sports tab.

This is potentially important on a few levels. For one, it gives those interested in watching ESPN3 content on their TV an opportunity to do so inside Sling’s app rather than an extra app on a connected-TV device. For another, it improves the visibility of ESPN’s digital content and reduces the hurdles to accessing it. That makes sense for Sling, as this is an extra feature of their service relative to competitors that they can market, and it makes sense for ESPN, which should hopefully gain some viewers of their digital content (increasing the value of ads on that content) and some awareness of it. That could help build up anticipation and demand for their own forthcoming over-the-top service (which is expected to focus just on ESPN3 content at first).

On its own, this announcement isn’t earth-shattering. Sling TV customers have had access to ESPN3 content since January, so this is merely making that content easier to locate and watch rather than providing new access to it. This is only one of the many sports options on Sling TV, too, as they also have deals with ESPN’s regular channels, FS1, NBCSN, the Pac-12 Networks and more. Still, it’s an interesting step, and one that further diminishes the line between content on ESPN’s TV platforms and content on ESPN3. If other providers also go down this road in the future, that line may become still less relevant.