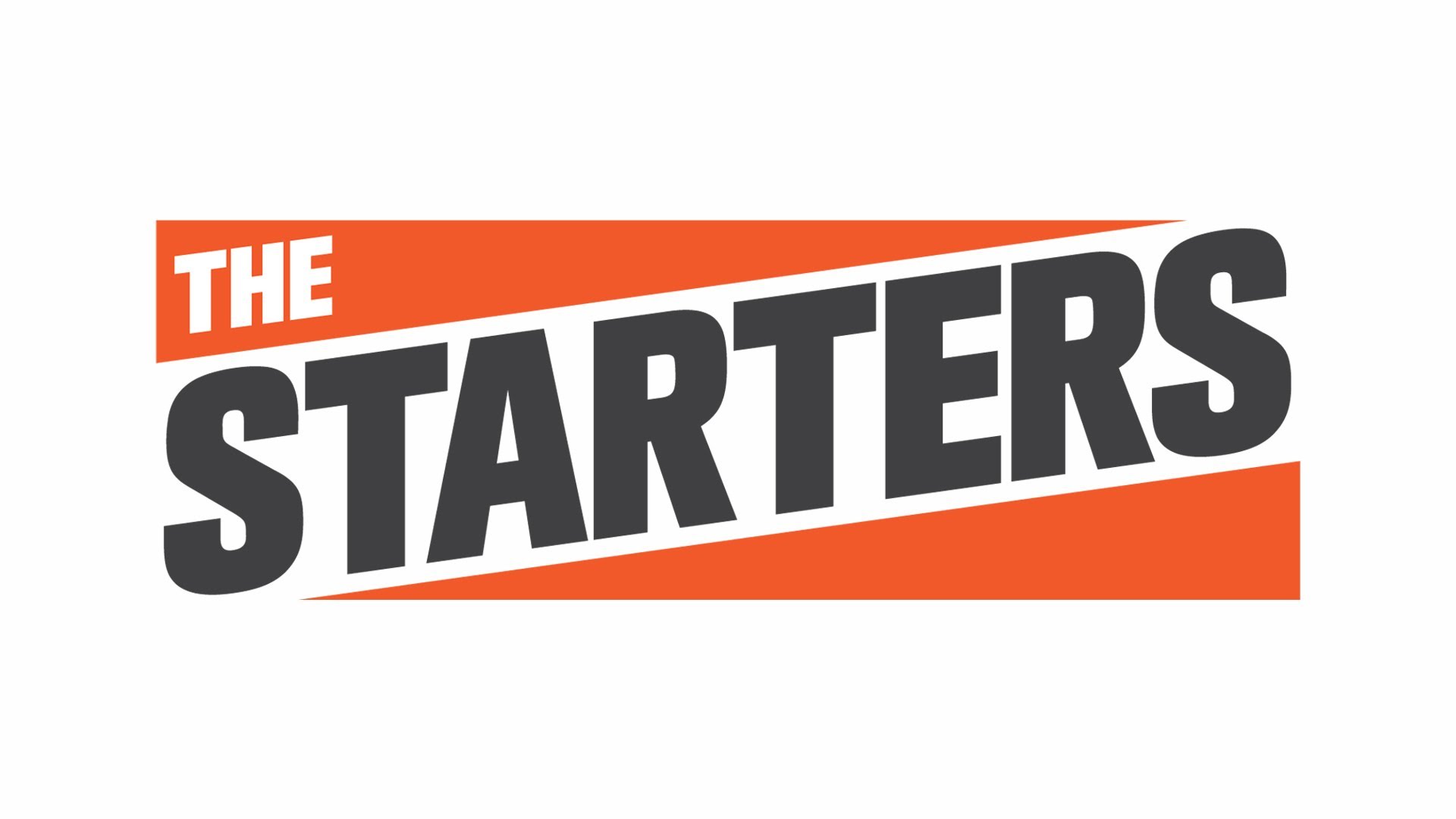 What Is It?: Monday-Thursday, it’s an audio version of the NBATV show of the same name. On Fridays, it’s a 60-90 minute “The Drop” podcast talking about the NBA, the Tweet of the Week, Pun Gun Fun, Steppin’ on the Beach, and plenty more.

This season, The Starters added a Twitter show on Tuesday mornings at 11 a.m. eastern. That show is also available as a podcast and is a hybrid between their other offerings. The first episode lasted about an hour and included TV-style segments, even though the guys were sitting around their podcasting table.

Who’s the Host?: JE Skeets (real name Phil Elder), Tas Melas, Leigh Ellis, and “Taco” Trey Kerby host the show. Skeets is the show’s point guard, coming in and out of break and handling the topics the most. Melas is the other member of the backcourt, handling the segments at times while giving opinions alongside his facts. Ellis is the stretch four on set, spotting up for shots with opportunities to talk about basketball history, Australia, Barre 3, and plenty of other tidbits. Kerby, who also handles The Starters blog on NBA.com, is the old-school, low-post center. He’s usually away from the desk, monitoring social media. He starts the show by bringing up something from the day’s news and posing a question to the show’s social media followers.

On Fridays, Jason Doyle (“JD”) and Matt Osten (“Matty-O”) join the conversation on “The Drop.” They’re also present for the Tuesday Twitter show.

What’s A Normal Episode Like?: Melas starts off by saying “On Today’s Show,” followed by he and Skeets going over that episode’s main topics. Melas concludes the open by saying “The Starters starts…NOW.” After the music plays, Skeets says “Good evening, SWEET world!” before introducing the on-air quartet, with each person having a different slogan. Next to him, “as always,” is Melas, who says a one-liner of some sort, followed by “the International Man of Mystery, taking it to the max” Ellis saying “…friends” in his Australian accent, to which Skeets and Melas reply “…mmm, Leigh Leigh.” “Last, certainly not least,” is Kerby, who responds with a fierce “Ayo!” that the other hosts respond to with an “ayo” of their own. Then the show gets properly underway.

The Monday-Thursday show is 22 minutes of dialogue and discussion about NBA news, both on and off the court. It’s never forced debate and there’s always quality insight from the hosts on each topic. On “The Drop,” the discussion is much less structured, sometimes veering off the rails for a little bit. Doesn’t make the podcast any less fun or entertaining, though.

On Fridays, Matty-O drops the drops and JD does audio mixing and production. During intros, Osten plays a random, ridiculous sound byte for his intro while JD is kind of…normal…with his intro.

The Twitter show is still figuring itself out. As a podcast, it feels more like a second Drop podcast as opposed to a TV show in audio form. Like the Friday podcast, it covers NBA and NBA-adjacent topics.

Who Is It For?: True NBA fans. There’s minutiae covered during the shows at times, so you have to have more than a passing interest in basketball.

Who Is It Not For?: The Drop podcasts can go a little long on Fridays, but the Monday-Thursday shows are only 22 minutes, with the Twitter show a somewhat structured hour. At those lengths, they move quickly but still have some time for discussion, when necessary. It’s not bogged down by cliched “faux-nalysis” from former players. If you’re looking for that, go watch a bad studio show.

How Many Episodes Are There?: Suffice to say, it’s a lot. The podcasts originated in 2006 as The Basketball Jones. In 2013, the NBA gave the guys a TV show and renamed it The Starters. They’ve had the name and done the show this way ever since.  Unlike Intentional Talk, the episodes are uploaded to YouTube and as podcasts right after the shows air.

Can I Jump Right In?: Yes and no. The Monday-Thursday shows are easy to get into because they’re very present and fresh. The Twitter show and The Drop will take some getting used to. There are certain segments, including the Tweet of the Week (mostly the related shoutouts), Tweet Heat and The Complainted Area that you need to hear a few times to buy into them. I started listening around the show’s 10th anniversary, but it took until the trade deadline – about four Drops later – for me to feel fully integrated as a listener to the Friday show.

What’s Not Great?: I’m finding nits to pick here, but The Drop sometimes erupts into too much of a giggle-fest, not that it deters me. Monday-Thursday, the show is really good. And so are Fridays, but it’s a different kind of good. It’s nice to have a podcast to listen to over the weekend.

The only content-related issue I can think of is that Skeets sometimes introduces a topic and gives his opinion back-to-back, which can make it feel like he’s dominating the conversation, even though he isn’t. And if he’s last to give his opinion, he’s still talking for a little while without anyone else speaking. It isn’t an issue for me because I can tell the difference between his narration and opinionation, but I can imagine some listeners could get tired of his theoretical conversation domination.

The lack of a visual, while it does hurt some shorter segments like the Very Solid Play and fan signs, is overrated. The show is mostly audio-friendly, and The Drop is a podcast by nature. So while being an audio-only TV show makes The Starters imperfect, it’s still pretty great.

So, Should I Listen To This?: If you’ve scrolled this far and haven’t already hit subscribe, what are you waiting for?

While I consume a lot of sports media, I have never been someone to call into local sports talk shows to give my take. During the summer, The Starters got me to e-mail in and ask a question for The Drop, which they read on the show. That one made my day and made me feel worthwhile as a fan.

Some nights, I’ll watch the show on YouTube during dinner and listen to the podcast later on, before I go to bed. Monday-Thursday, it’s only 22 minutes, with a 60-90(ish) minute podcast I love hearing every weekend and an hour-long Tuesday bonus show I can digest the rest of the week.