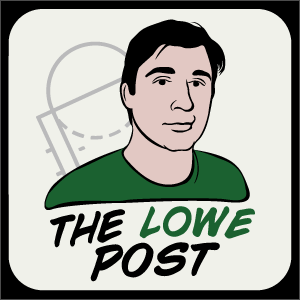 What Is It?: Zach Lowe talks with someone else in the basketball community, whether it be a coach, player, writer or media personality. It’s a deep dive into NBA issues.

Who’s The Host?: Apparently, a man referred to as “America’s Best Sports Writer” isn’t content with just writing. The former Grantland writer hosts this show, which has an irregular release schedule, throughout NBA season and every so often during the off-season. The Lowe Post will continue for years to come based on his recent re-signing with ESPN.

What’s a Normal Episode Like?: Lowe opens by saying “Welcome to…The Lowe Post podcast,” always pausing after saying to. Apparently, he starting doing it accidentally, and it stuck. I like the intro so much that I’ll sometimes say it alongside Lowe.

The difference between you or me talking to these people and Zach Lowe talking to these people is his knowledge of the league. He understands Xs and Os really well and also knows league musings better than most national reporters. This leads to questions I’d never consider asking and topics I’d never think of talking about, but it all leads to information I’m glad I know after listening to an episode.

Who Is It For?: NBA fans. I’ve never listened to an episode and considered it a waste of time. Rather, just the opposite. I’ve learned tons of things from each episode.

Who Is It Not For?: If you care about your team and none of the 29 others, you’ll find most episodes boring. But I’m not a Nuggets or Warriors fan and I’ve found summer episodes with Michael (not Mike) Malone and Steve Kerr really insightful.

How Many Episodes Are There?: A lot. There were nine episodes in June, five in July and four in August. This month, he’s recorded three episodes, two with ESPN writer Kevin Arnovitz and one with ESPN broadcaster Jeff Van Gundy. As basketball season starts up, the episode rollout should be coming more often.

Can I Jump Right In?: Definitely! Episodes with coaches, GMs and players (those in the NBA) have a longer life span while those with another writer/broadcaster, such as two of the recent season preview-style episodes, can go out of date pretty quickly.

What’s Not Great?: Not much. Lowe isn’t a broadcaster by nature, but he’s really good at podcasting. Maybe you don’t like his self-deprecation, but I don’t consider it an issue.

I have yet to run into anyone with a bad thing to say about The Lowe Post, which makes it difficult to pick any nits. Maybe Lowe’s general unawareness about anything that doesn’t involve professional basketball? That he’s too nice of a person? That he doesn’t promote his written work enough during the show?

If you have an issue with this show, please leave it in the comments or tweet me, because, for the life of me, I can’t come up with one.

So, Should I Listen to This?: Of the reviews I’ve written, this might be the most resounding yes. It’s a podcast for anyone with interest in the NBA. Lowe is well-versed when it comes to the Association and his guests are always much more engaged than during a brief radio interview.

If I see there’s a new episode of this show on my phone, I turn off whatever podcast I was listening to and immediately tune into this.