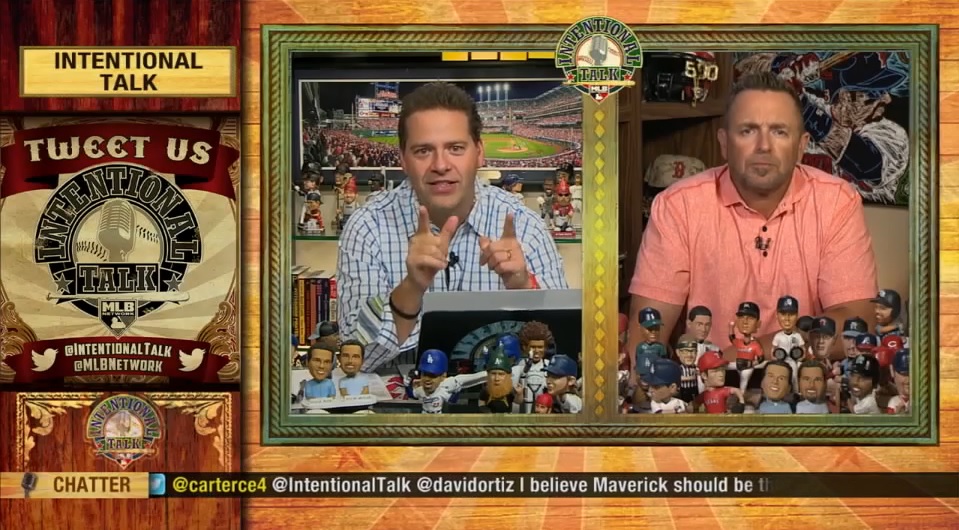 What Is It?: It’s a video podcast of the MLB Network show. While the show airs Monday-Friday at 5 PM eastern on MLB Network, the podcast isn’t available until the following morning.

Who’s The Host?: Former Major Leaguer Kevin Millar and former Best Damn Sports Show Period host Chris Rose team up to host IT. There is also a massive bullpen (pun intended) of recurring guest hosts who fill in for either or both of the hosts.

What’s A Normal Episode Like?: Get used to a busy screen if you’re watching the video podcast on your phone. Millar and Rose are rarely in the same room. Usually Rose is in a studio while Millar is at his house, also known as Studio 1-5. It isn’t an issue for show quality, but it means both of them are in boxes, and those boxes are themselves part of a screen full of graphics and tickers.

The show is full of thematic segments based around the news of the day. I’d talk about them all, but Wikipedia has a much more comprehensive list than I could come up with. Usually, Rose is the ring leader and he leads Millar with a question of some sort. Sometimes, they make Millar the butt of a joke, which is funny. He takes it all in stride and always flashes the “show teeth” smile.

Intentional Talk is known for the “Best Interview in Baseball,” where there are more boxes on screen because the hosts are interviewing a player/coach/team official. Like the rest of the show, the interview is light-hearted and humorous. It usually includes some random rapid-fire questions in there, as well.

Every episode ends with “Got HEEEEM!,” a quick segment narrated by Millar. He takes a caught-on-camera gaffe from a game the night before and ends the “highlight” by saying some variation of “Got HEEEEM!” depending on the gender/number of those involved.

Who Is It For?: It’s a podcast of a show airing on MLB Network. If you don’t subscribe to MLBN, the podcast is a taste of some of the network’s high-quality studio work.

Who Is It Not For?: The podcast is not for people who like to be up-to-date on their baseball news. The show recaps the night before and previews that night’s games, which means the games they preview have already happened by the time you can listen to the podcast.

How Many Episodes Are There?: Intentional Talk debuted in 2011, though I’m not sure when the podcast debuted. It updates regularly, as IT airs shows year-round.

Can I Jump Right In?: I recommend starting off with a Friday episode. You won’t be as far behind because they’ll be previewing the weekend. Plus, I think Fridays have the best segments, especially “This Week in MLB Network.”

What’s Not Great?: If you’re using this podcast solely for its audio, your biggest gripe will be the one I already mentioned. Hearing Rose and Millar preview games that already happened is a major downside. I’m not sure why it takes so long to upload the shows. Other daily TV shows (The Starters, studio shows on ESPN and FS1, etc.) don’t have this issue on their podcast feeds. Sure, they release audio podcasts, but that alone doesn’t explain the delay.

If you do subscribe, you’re going to notice that video files are a lot larger than audio. Each file is slightly under 500 MB in size, which means you might be struggling to find space for shows. It could also be an issue if you’re downloading the show over cell data and not wi-fi.

Should you watch the video podcast, you’ll be greeted by a beautiful screen. If the video is compressed, it isn’t noticeable on my iPhone 6’s 4.7-inch screen.

What is noticeable, however, is how much “stuff” is on the screen. I mentioned it before, but seeing Millar and Rose in boxes, along with a lower third, a crawl of tweets, and a score graphic on the left side of the screen can become a lot to take in. And you can add in another box when a guest comes on. Unless I bring my phone up really close to my face, I have trouble seeing all of the moving text. I can’t imagine this being an issue on a tablet, laptop, or television, but it’s tough to handle on a small screen.

If I had to be nitpicky with the show itself, I’d say that the content can be too lighthearted at times. Intentional Talk isn’t a serious show, but it feels too buddy-buddy, especially during interviews. I don’t have a problem with it, but I could see how some listeners might get annoyed.

So, Should I Listen To This?: You’ll notice none of my issues with the podcast have anything to do with the bulk of IT‘s content. Intentional Talk comes across as a difficult balancing act made easy. Considering Rose, Millar and the production team are in three different places, the content is consistently top notch. They don’t make excuses and everyone on screen is having the time of their life.

If you know me, you might think I’m biased because I’m from the Cleveland area, just like Chris Rose. In fact, Rose is a graduate of University School, which is a big rival of my alma mater, Hawken School. While I know he’s an Indians fan, just like myself, I’ve never considered Rose to be too much of a “homer.” Both hosts are very knowledgeable on the entire league, regardless of whether or not it is a team they root for or a team they played for .

All of this makes the show worth watching…on MLB Network. But it can’t make up for the podcast being released a day late, by the time most of the topics discussed are irrelevant. It would be like watching College Gameday on Sunday morning.

If MLB Network can release the episodes night-of, even as audio-only podcasts, they should do it. That would make it one of the best baseball podcasts you can find.

Bottom Line – TL;DR: It’s a video podcast of a great MLB Network show. If only they didn’t wait until the morning after to release new episodes.