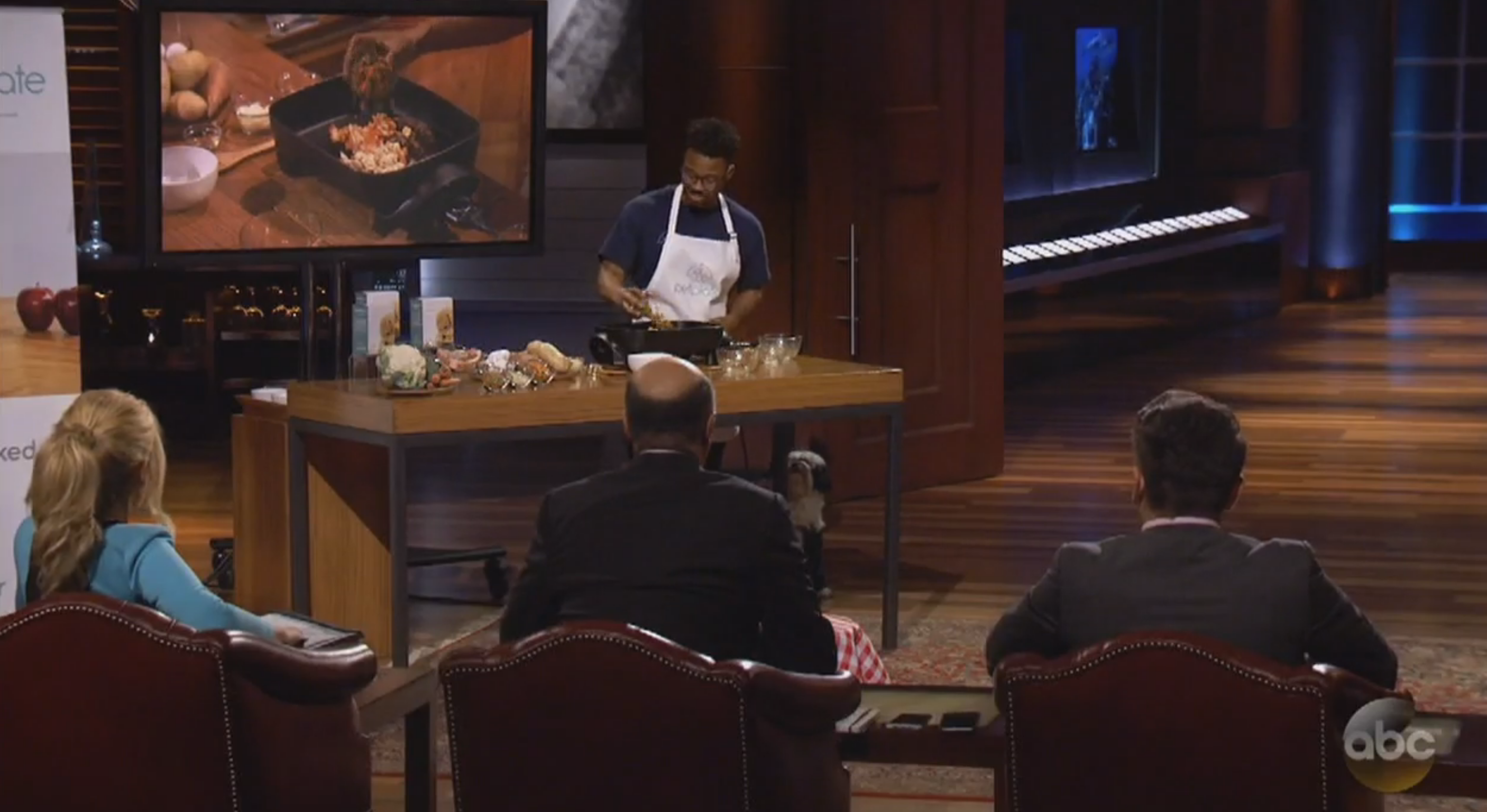 The Bait: An electric skateboard, Seamless for pets, another one of those tech bro food-hack thingys and a home sous vide machine. Plus, the open promises “Shark Tank history?”

lolwut. Dinner in cities is great because there are lots of great restaurants. But the Inboard guys will make urban dinner better…with an electric skateboard? What?

“We’re on the verge of a transportation revolution,” they say—and uh, anyone remember the “revolution in IT” promised by Segway? Yeah Inboard is basically a Segway skateboard:

Now, the engineering is brilliant. I had no idea in-hub wheel motors could be made so small, and the build quality looks great. They’ve already raised $2.7 million and are valued at $10 million after their last round. But they’re selling Inboard as a Prius replacement, and I dunno about that. Neither does Robert.

Okay, so let’s talk marketability. How much does it cost?

Poor @mcuban still has scar tissue from his hoverboard investment. When Mark says “Chris is wrong!” what you’re hearing is a cry for help.

But whoa: Inboard claims $5.9 million in preorders, and that’s got Mister Wonderful nibbling on the line. He offers $750,000 at eight percent interest, payable over 36 months with 2.5 percent equity as a kicker. But one of the Evanses insists their $18.75 million valuation is deserved, and they’ve worked hard to get cash-flow positive. Servicing a bunch of debt right now is the last thing they want to do.

Robert doesn’t see it as a mass-transportation buy, and you’ve got to see it that way to come anywhere close to the bonkers valuation. He’s out. Cuban’s out, too. Chris says he might buy one—but despite insisting to Cuban he knows it could work, he’s not investing.

Lori starts talking about Inboard’s path to success, but Mister Wonderful wants her to get to the point: Is he competing with her or not? Is she in or out?

…which sounds like a perfect spot for a DRAMATIC COMMERCIAL BREAK

When we come back, Lori offers the exact same deal as Mister Wonderful, but for three percent interest instead of 2.5. The bait decide to leave the Tank and confer—but when they come back, the Sharks have, in Vaderian fashion, altered the deal:

“The best deals are ones you squirm a little bit,” says Mister Wonderful. “I want to see you squirm.”

Squirm they do: They insist they can’t go that high on equity and offer to raise the interest rate by three percent in return. The Sharks counter with ten percent interest, but four percent equity. Then they insist their investors will never accept more than three, which—what? As Mister Wonderful notes, they came into the Tank offering four percent. How can they not go higher than three?

Swim or chum? They took the deal…before the Sharks altered it further. SWIM! Time to saddle up and dork:

Should you buy? SHOULD BUY.

Webb was raised in New Orleans by a single mom, and was the first member of his family to go to college—MIT, in fact, and studied physics. But he realized he wasn’t going to be an astrophysicist, and turned to study mass food production. Soon, he quit his six-figure job to improve food manufacturing.

“Who wants to see what actually goes in a Pet Plate?” Webb asks, and of course everybody does. Webb starts cooking a very legit-looking dinner for four.

When PetPlate food arrives at your door, Webb says, “It’s ready to go from box to bowl.” You can sign up for a three-, six-, nine- or twelve-month subscription, the price of which varies depending on the weight of the pet. For a Chihuahua, Webb says, it’s about $30 a month.

After eight months in business, PetPlate has only 100 subscribers. Webb says it’s because he’s doing everything himself. He can whomp up 300 pounds of food in just a few hours but only has the capacity to deliver it within 300 miles of New York. The Sharks are all concerned: Delivery food service is hard enough to make money on even when you’re charging $15 a plate instead of a dollar a pound.

Lori sees way too many challenges to scale this up; she’s out. Robert thinks Webb should have been able to get a lot more subscribers, even in the short period he’s been open.

“You’re the dream partner I’d love to work with,” Sacca says, but he’s already got a food-delivery business. This would compete; he’s out. Cuban is also out. That only leaves one Shark, and he doesn’t look hungry.

Swim or chum? “I’m sorry,” Mister Wonderful says. “I can’t take the journey with you.” CHUM. Webb wells up afterwards. Though he’s “tired of hearing no,” he won’t stop fighting.

Should you buy? Honestly, even as a big animal lover who believes my pets should get decent food, I feel conflicted about this.It’s healthier for my dog, sure, but how many humans could benefit from PetPlate’s fresh, wholesome ingredients? Webb being grossed out by mass-market food production for humans, and then launching a premium dog-food service doesn’t make a ton of sense to me… but if you’re fine with all that, the product is good and no more expensive than a premium grain-free dry food. SHOULD BUY, though it’s unavailable anywhere but in and around NYC.

I’m sorry, but I’m going to force you to watch the ridiculous pre-Tank pump-up routine these two did:

What’s the idea driving Nootrobox’s FORTY MILLION DOLLAR valuation (which, by the way, is the Shark Tank record teased in the open)? Well, there’s some trendy food science, maybe a little pseudoscience, mix it all up with New York Magazine-level media attention and all of it comes together in GO CUBES CHEWABLE COFFEE:

Cuban nails it: Lots of people call themselves biohackers. Many of them are software engineers who think their skill set is more portable across human knowledge than it really is. These two sure seem to fit that profile.

Cuban’s also right that they’re far from the first to bring these ideas to market. Bulletproof Coffee and Soylent are similar “bro science” — to borrow their term from the NY Mag profile — products that purport to hack body chemistry to make you better at whatever it is you do. Neither of these companies is having a banner year.

Sacca immediately understands where they’re going with this, and Robert asks the question that really matters:

At every turn, these guys wildly overestimate the appeal of their product, the value of their company and the potential of what it is they’re doing. Coffee-flavored sugar cubes spiked with caffeine are not putting Starbucks out of business.

Swim or chum? This is the Tank. It is not their house. CHUM.

Should you buy? Look, I’m sure the oceans of coffee, diet pop and Rockstar Recovery I drink is no better for me than this stuff. But A) I know those things work, B) I know what’s in them, and C) they’re a cheaper. SHOULD NOT BUY.

“Top chefs around the world have a secret weapon,” Lisa says: Sous vide machines—which, if you’ve ever read one of The Comeback’s Top Chef recaps, you’re more than familiar with:

This looks like a nice-looking sous vide circulator. One big question neither the Sharks nor the Fettermans bring up, though, is food safety: Vacuum-sealing doesn’t prevent all bacteria growth, and inexpertly cooking meats at very low temps for a very long time can make you sick.

Nevertheless, an impressive $3 million worth of Nomiku units have been sold since 2012, mostly online. They’re expanding into retail and just got a P.O. from Williams-Sonoma. They’ve taken a $6 million seed round, and a took a $2 million convertible loan note. Lisa Fetterman, by the way, is a really gifted pitcher. Check out her exemplary Kickstarter video:

Cuban clears the deck right away: He is not here for this super fancy food stuff. He’s out. Lori’s had meat cooked sous vide before, but doesn’t believe the home kitchen is ready for these techniques and textures. She’s out. “It’s all French to me,” says Herjavec, bowing out—but Sacca’s super into it.

They expect $5 million in revenue over the next 12 months, which sounds great, but Sacca notes the last round of funding and convertible-note debt actually means they could lose much, if not all, of their steak in the company once they do a deal with a Shark.

Lisa, the co-founder/CEO of @nomiku, is the real deal. #SharkTank‘s Twitter mentions show: America loves the way she rolls. https://t.co/Tng2H1oM0G

Sacca wants to work with Lisa; he’s totally sold on her. The Fettermans both seem to want to work with him, to the point where Mister Wonderful practically has to scream to be heard—and he screams “I’M OUT.” That got their attention…just in time for a DRAMATIC COMMERCIAL BREAK.

“The best deals are the deals where we’re all excited,” Sacca says upon return, and he thinks if the Fettermans are only left with 10 percent they won’t be. But he has an offer for them he thinks will work: $150,000 for 10 percent of the company, contingent upon them going back to their original investors and negotiating their stake back up to about 40 percent. Lisa tries to counter with eight percent equity, and nearly every Shark moans or gripes. Sacca’s bending over backwards to make a deal Lisa will be happy with; can’t she just take it?

As much as I think it’s dangerous for Lisa to push back on my offer, I respect her scrappiness. But time is wasting, gift horse, etc.

Swim or chum? “We’re gonna take it!” SWIM. “Chris Sacca is the frickin bomb,” Lisa says, and pay attention: Sacca’s pattern of using the Tank to invest in people, not products or companies, continues in this ep.

When you made the deal of the night! #SharkTank pic.twitter.com/nGkjTDSq0z

Should you buy? $200 for the classic model is steep—but I paid $99 bucks for a smoothie blender, and I don’t drink smoothies nearly as often as I cook meat. If you’re confident you can handle meat without slathering it in anaerobic bacteria, you SHOULD BUY.