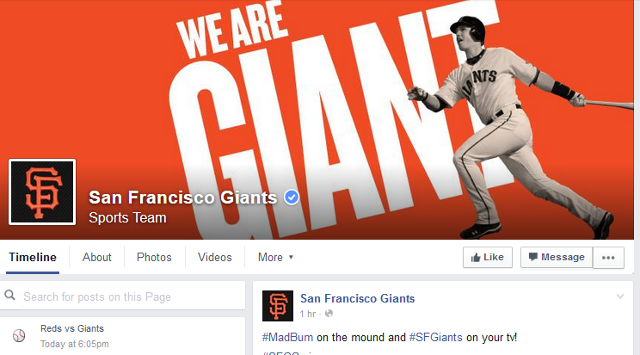 What do you get when you combine MLB’s desire to promote their games in the digital realm (as with partnerships and events like Snapchat Day) with Facebook’s desire to stream live sports content? MLB teams streaming live content daily on Facebook. From Sahil Patel of Digiday, here are further details on what they’re doing:

With spring training in full swing, several pro baseball teams, including the San Francisco Giants, Detroit Tigers and Los Angeles Dodgers, are experimenting with daily live broadcasts on Facebook. Typically, these teams are giving fans a behind-the-scenes peek at players at batting practice or going through field drills.

“What we’re trying to do is give our fans that authentic look behind the curtain and get as close as they can to the players,” said Bryan Srabian, vp of brand development and digital media for the San Francisco Giants.

The San Francisco Giants, closing in on 3 million Facebook fans, are going live once or twice a day on the platform. The effort is manned by the organization’s two-person social media team, which includes Srabian — though it’s looking to add a staffer for the coming season.

The Detroit Tigers have a similarly nimble social operation, with Facebook live streaming as well as other social content handled by its digital and social media specialist Mac Slavin. The team, which has more than 2.3 million Facebook fans, is usually going live once a day.

A Facebook live broadcast is a relatively inexpensive production, often requiring only a person with an iPhone. It’s one of the key reasons why media companies are eager to experiment with the tool.“Facebook live is more about a raw and authentic feel versus a polished broadcast,” said Srabian. “Maybe the other way is an option down the road [on Facebook], but right now its ease of use for us and for fans to watch in real time is appealing.”

These kinds of low-tech, low-cost streams are becoming increasingly popular in general, and that’s why teams (as well as media companies; consider Fox’s promotion of Clay Travis’ iPhone/iPad broadcast “Outkick The Show”) are embracing them over conventional broadcasting camera setups. If the content’s interesting, a lower-tech broadcast absolutely can work, and these kinds of behind-the-scenes glimpses require less technology and investment to be successful than, say, a full game broadcast. Srabian tells Patel the Giants plan to continue this kind of live-streaming during the regular season, too, but in a different fashion:

Instead of stopping with batting practices and field drills, the team will try to spotlight players, team staff and special events spread out across the season. Facebook live streaming will remain a daily exercise, according to Srabian.

“I’ve got a list of ideas about what I want to do,” he said. “Maybe it’s going with a player to a local coffeeshop or to get a haircut and having him answer fans’ questions, or having him give a tour of his house — things that are typically social in nature, but fans don’t get to see it as much.”

That sort of content absolutely could work on this platform, and the reach of Facebook could make it a valuable place for teams. We’ll see if this trend continues, but there seems to be plenty of upside here for MLB clubs, and perhaps for other sports’ teams as well.