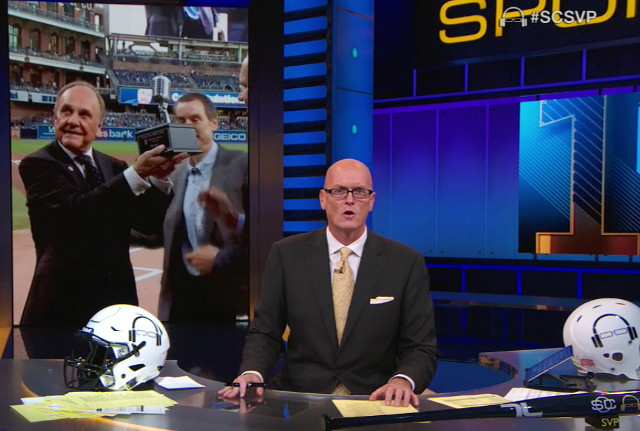 All the discussion of Vin Scully’s upcoming retirement has somewhat overshadowed other famed veteran TV baseball announcers also exiting after this season, such as the Houston Astros’ Bill Brown and the San Diego Padres’ Dick Enberg. Enberg, who has also worked for NBC, CBS and ESPN, has had a remarkable career and an impressive farewell tour in his own right, though.

This season, he called one game for his hometown Detroit Tigers, he gave us one of the all-time “phrasing” moments, and he received a national tribute from ESPN’s Scott Van Pelt on Van Pelt’s edition of SportsCenter Thursday:

.@notthefakeSVP pays tribute to Dick Enberg, a "titan" of broadcasting who called his final home game on Thursday. https://t.co/fDIrFZMajp

Van Pelt touches on both Scully and Enberg there, but focuses on Enberg thanks to Thursday being his final game at the Padres’ Petco Park. He calls Enberg “an absolute titan” and says “Enberg has called it all, woven into the tapestry of so many huge events: Super Bowls, NCAA Final Fours, host for the World Series, the Olympics, golf’s majors, Grand Slam tennis. He’s seen and done everything that anyone in our business could hope to see, with his voice providing the soundtrack. Now I understand the reverence for Scully, he’s earned it, but it’s worth pointing out what he thinks of Enberg, telling The L.A. Times, ‘He’s just a marvelous announcer, I have the utmost respect and admiration for his abilities.’ So do I.”

Van Pelt goes on to tell a personal story about his first interaction with Enberg.

“After he called a NC State-Maryland game in Cole Field House back in the seventies, Enberg met a little kid who stood there awestruck. The voice the boy had heard coming out of the television was now coming out of the mouth of the tall man who stood in front of him. ‘You’re tall, are you a basketball player?’ Enberg asked. I don’t remember what I mumbled, I just remember how kind he was, and how his warm smile made me feel important. A couple of years ago in San Francisco I had the opportunity to tell him something important to me, that he’s my blueprint. Any youngster I meet, I hope I make feel as special as he did, because they won’t forget it. I know I didn’t.”

He then finishes with some of Enberg’s own thoughts.

“So you can add my remarks to the long list of those paying homage. As Enberg put it in a L.A. Times interview, ‘Everyone loves a good funeral. All these people want to talk to me now because I’m about to leave. What I’m going through is an in-life obituary.’ Hey, the way I see it, better now than too late. At 81, with nearly 60 distinguished years on the job, Enberg told the L.A. Daily News in a different interview, ‘I’ve tried to avoid calling all this a retirement. I abhor that term. I’m not leaving or quitting. I’m just looking for another way to be creative.’ He’s finishing a book and wants to teach again. And like the list of people who want to thank him, the list of those Enberg has already taught is lengthy. And I am on both of those lists. So enjoy whatever’s next, Dick. You are a gentleman and a giant.”

It’s good to see Van Pelt use his prominent platform to recognize Enberg and his remarkable career this way, and that’s a touching and important tribute. Well done.