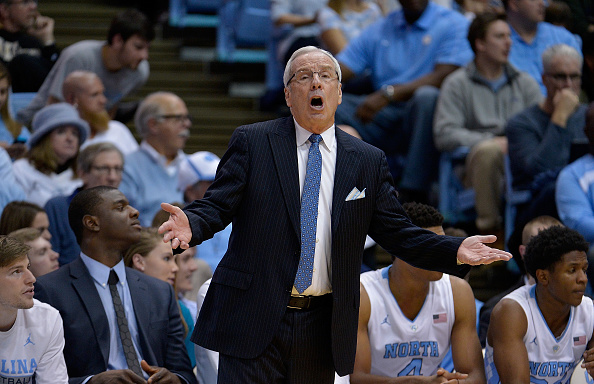 College coaches have often been known for an antagonistic attitude towards the media, and UNC men’s basketball coach Roy Williams has been fully living up to that during the Tar Heels’ run to Monday’s NCAA Tournament title game. Williams called ESPN’s “green room” (draft) talk “the most ridiculous freakin’ thing I’ve ever seen” in January,  went off on CBS’ Doug Gottlieb in February over comments that he might retire after the season, and told Dan Patrick last week that Washington Post columnist Kent Babb should “step carefully” after a story on Williams’ health that angered Williams’ friends (despite Williams himself not reading the piece). This trend continued after UNC’s Final Four win over Syracuse Saturday, when John McCann from the Durham Herald-Sun asked how much of Williams’ decision to stick with struggling players despite media second-guessing was confidence they’d improve and how much was hope: Here’s the transcript of his response, via Ryan Phillips of The Big Lead:

“This year I heard more than ever announcers and writers question things more than I’ve ever heard. One of the other guys said we’re not in the locker room, we’re not at practice every day. If you asked me if I’m as smart of a sports fan as you, I’d say probably not because I don’t work on those other sports. But I do see our guys in the locker room every single day.

“The last question, I wasn’t paying attention to know who asked it, but we want to be a balanced team. I have to have some contributions from everybody that plays. It is something to listen or read – I haven’t read very much this year, to be honest with you. I haven’t read many articles. But that’s the best answer.

“Do you know how many practices we’ve had? Ninety-eight practices. Not just you, because John, I liked the way you asked the question. You didn’t hit the wrong buttons or anything, you did it nicely. How many of you guys came to any of our practices? Michael came to one. Somebody else came to one. I mean, you think about that. I would never criticize somebody about something that they know a heck of a lot more about.

“Bill Guthridge has the best statement: Do not condemn thy neighbor unless you’ve walked in his moccasins for two full moons. I have to explain that to my guys to explain what moccasins (are) and how long moons lasts.

Williams isn’t wrong that he probably spends more time with his team and more time thinking about basketball than the journalists who are asking him questions, but that certainly doesn’t make him infallible. In fact, his time-spent analysis is problematic, as outsiders with a fresh perspective often see what those close to the situation miss. That doesn’t mean that Williams is wrong to disagree with some of the criticisms, and getting his team to the national championship game suggests his strategies are working to at least some extent, but that doesn’t necessarily invalidate all the specific criticisms either or mean that the coach always knows best. Moreover, Williams’ “I would never criticize somebody about something that they know a heck of a lot more about” comment seems pretty patently false considering how much time he’s spent blasting analysts and journalists this year. If he truly subscribed to his “only those who spend time doing something can discuss it” theory, he wouldn’t be publicly expressing opinions on the state of journalism today, would he? (Unless he’s had a secret journalism career we don’t know about.) What’s perhaps particularly remarkable, too, is that many of Williams’ strongest reactions appear to have been to comments he didn’t personally read or watch but rather to how those comments have filtered down to him, such as in the Babb and Gottlieb cases.  His “I haven’t read very much this year, to be honest with you” is interesting, as he seems more willing to feud with the media this year despite being less informed on what they’re actually saying. If Williams wants to be confrontational, that’s his prerogative, and it’s understandable why he’d respond in a fiery way to things he considers inaccurate (such as Gottlieb’s comments). However, at the very least, he might do well to consider pieces or comments in their original and full context rather than by what others tell him they contain, as happened with both the Gottlieb and Babb cases. Williams is welcome to be combative if he feels the need, and he’s probably actually helping his seeming adversaries in the media by doing so (“Roy Williams goes off” is a far better headline than “Roy Williams politely accepts criticism”), but his “I’m a hell of a lot smarter about basketball” act is far from accurate in its own right, and his veiled threats against media members are really over the line. If Williams was truly so smart, he’d recognize that he’s not always right, and that his media feuds aren’t necessarily helpful to his cause in the long run. [The Big Lead]