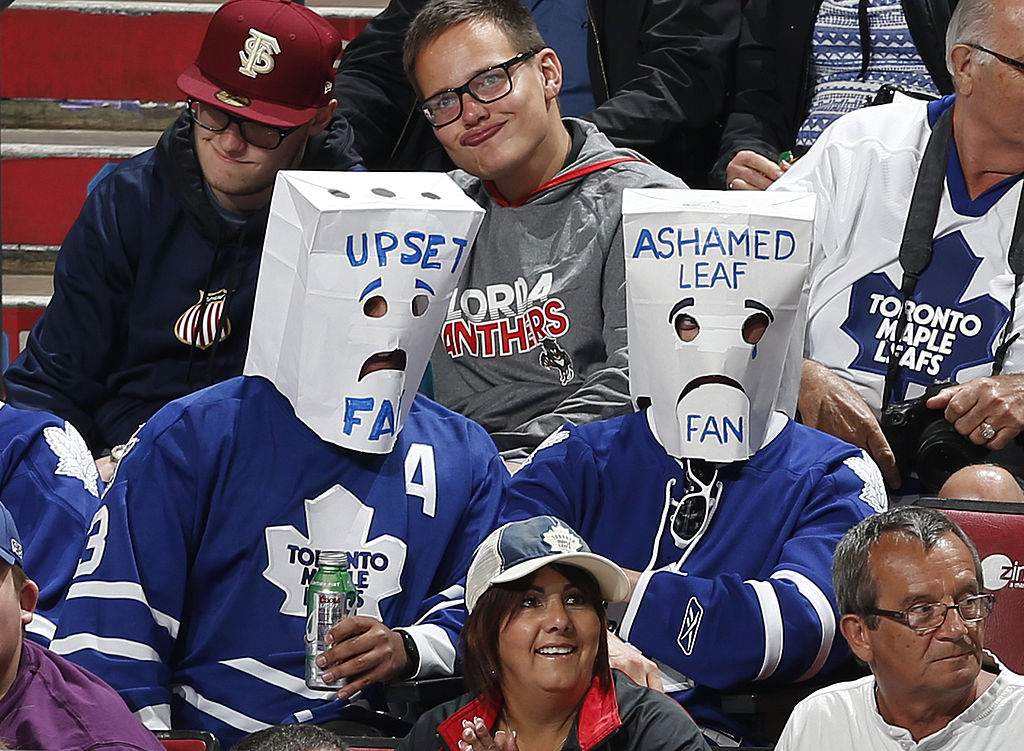 The growing possibility of the NHL playoffs being without a Canadian team for the first time since 1969-70 should be a major broadcasting concern for Canadian broadcasting company Rogers Media, which spent $5.2 billion Canadian ($3.8 billion U.S. at the current exchange rate) to lock up national NHL rights for 12 years in 2013, but hasn’t received the ratings they hoped for through their first season-and-a-half. That’s especially true in the playoffs, where they got off to a good start last year thanks to having five Canadian teams in the postseason, but saw ratings tank afterwards once those teams exited, with total playoff ratings dropping by 20 per cent over the previous season. With this year’s playoffs looking like they might not even have a single Canadian team (as of Friday morning, there were no Canadian teams in playoff position, with the closest being Ottawa and Vancouver, four and eight points back respectively of the last wild-card spot in their conferences), that’s raising some worries about what this could mean for Rogers, as Aleksandra Sagan of The Canadian Press writes:

“The bottom line is: no Canadian team in these playoffs is not at all good news for Rogers,” Marvin Ryder, assistant professor at McMaster University’s DeGroote School of Business, said in an interview. …

Ryder predicts playoff viewership could fall by 25 to 35 per cent this year.

“They’re going to take a massive hit,” said Detlev Zwick, an associate professor of marketing at York University’s Schulich School of Business. He projects a viewership drop between 30 and 40 per cent — if not more — compared to last year.

“Simply, the product they sold to or they’re going to sell to advertisers is just not worth as much.”

If significantly fewer fans tune in, he said, it’s likely Rogers will offer discounted ad space, while companies that have already purchased slots may try to re-negotiate the terms of their contracts.

Just how much are ratings likely to be affected by the absence of Canadian teams? Well, as Chris Zelkovich wrote at Yahoo’s Eh Game blog last month, there’s a huge difference in the numbers when a Canadian team’s involved:

Events beyond Rogers’ control are painting a bleak 2016 for the NHL on Canadian television.

With no Canadian teams in the playoffs, ratings will tank.

And if you don’t believe that, just look at what happened last season. When Canadian teams were still playing, games involving those teams averaged more than 3 million viewers. Once the last Canadian team was eliminated, ratings dropped and ended up 20 per cent lower than the previous season.

With no Canadian team to generate interest, those numbers could drop again.

It’s important to consider that the NHL contract hasn’t been a runaway success for Rogers in general so far, either, as their regular-season ratings dropped last year in addition to the playoff ratings. They’re paying an awful lot of money for it, too, more than NBC is for the U.S. rights ($2 billion U.S. over 10 years, an average of $200 million a year, while Rogers is paying an average of $316 million U.S. a year). Rogers cut 200 jobs across their TV, radio and publishing divisions in January, and while they denied that had any links to the NHL contract, saying the NHL “has contributed positively to our bottom line,” it’s worth noting that this isn’t a straight average value contract. It started at its lowest level in 2014-15 and rises by 5 per cent every year, so even if the contract has been profitable so far, they’ll need continual ratings increases (and the corresponding advertising dollars) to keep it that way. Last year’s low (and less-than-projected) ratings forced Rogers to amend their advertising rates for 2015-16, too, so they’re likely not making as much as they were off any particular ad. If no Canadian teams wind up making it to the playoffs, and the ratings fall accordingly the way most predict, that could be problematic for them.

Of course, the uncertainty of sports means this is going to happen at times, and while this year could be a down one, there could also be huge years over the course of this contract where a Canadian team makes a run. It’s worth noting that Rogers isn’t a one-sport broadcaster, either; the company experienced the flip side of this last summer and fall thanks to the success of the (Rogers-owned and Rogers-broadcasted) Toronto Blue Jays, who made the MLB playoffs for the first time since 1993 and drew incredible ratings along the way, including a stunning 5.12 million for their final playoff game. Even the regular-season games drew high multiples of what they typically had, and that made Rogers plenty of money, so much so that Jays’ right fielder Jose Bautista cited it this week when talking about the new contract he wants:

“It’s no secret that in a publicly traded company, everyone can track their performance fairly easy. Stock prices are monitored very closely by the whole financial world. I think there’s a direct correlation with the success of their earnings per share after we started experiencing success. Are they going to put it out in the media and say ‘Because of the Jays we made all this money?’ No, but you can read between the lines.

“It’s really unfair to talk about revenue and payroll and all of that. To me, those things for this organization are non-existent.”

He’s right on those stock prices: Rogers stock dropped as low as $40.72 near the start of the baseball season last April, but hit a high of $54.56 on October 26 (only a few days after the Jays’ playoff exit), and is still riding relatively high, closing at $50.11 Thursday. That’s certainly not all about the Jays, but their level of success (unprecedented in decades for that team, both on the field and in the ratings) brought in plenty of money for Rogers from both owning the team and owning its broadcasts. So, it’s not all doom and gloom for the company on the sports front. Given how much they’re paying for the NHL and how important those ratings are to them, though, you can bet they’ll be rooting hard for a Canadian team to sneak into the playoffs. If that doesn’t happen, it could be another bad postseason for them.