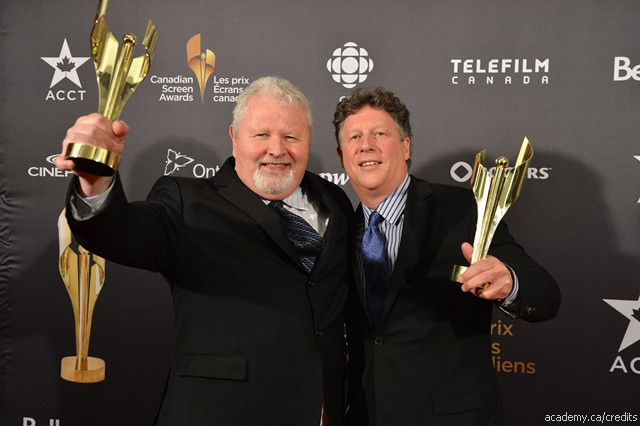 There have been plenty of discussions of Rogers’ Canadian NHL coverage in recent months thanks to their layoffs, the lack of Canadian teams in the playoffs, and their over-the-top strategy, and this week saw a major shakeup at the top. As Chris Zelkovich writes at Yahoo’s Eh Game blog, Rogers has elected to axe production head Gord Cutler (seen at right above at the 2013 Canadian Screen Awards, with Mike Brannagan, where the duo, along with Rick Chisholm, were honored for their role in producing the Canadian broadcast consortium’s 2012 London Olympics coverage), and their decision to do so ahead of the playoffs is sparking plenty of questions:

The media giant announced Tuesday that it has replaced production head Gord Cutler as it prepares to head into the Stanley Cup playoffs. Cutler’s job has been eliminated and his duties will be assumed by Rob Corte, who is now in charge of all live events and studio production.

“This change comes as part of our bigger company restructuring, which was announced at the end of January,”  Rogers spokesperson Andrea Goldstein wrote in an e-mail.  “While this has been a tough year with Canadian NHL teams out of playoff contention early, our commitment to the NHL has never been stronger.  There is no correlation between today’s change and our NHL deal.”

“While changes are difficult, today’s restructure puts Sportsnet in a position for continued success as we remain focused on delivering industry-leading content and innovation across all platforms.”

Reaction in the business was basically disbelief that Cutler would be axed and confusion as to why such a move would be made on the eve of the playoffs.

The timing here does appear to be what’s really unusual. Cutler was named Rogers’ senior vice-president of NHL production shortly after their 12-year deal for national NHL rights in 2013, and he’s been key to their approach to national hockey coverage. While that approach hasn’t met with universal approval, and while it has seen ratings fall by up to 30 per cent, Cutler is well-respected in the business thanks to his work with Sportsnet, the Canadian Olympic broadcast consortium, the NHL Network, Fox, NBC and TSN. All of the issues with Rogers’ coverage can’t be laid at his door, either, as Zelkovich writes that there were divergent views between him and Sportsnet president Scott Moore and that this move wasn’t all about Cutler’s performance.

According to sources who asked to remain anonymous, Cutler and Sportsnet president Scott Moore didn’t always see eye-to-eye on how the game should be presented, but it wasn’t anything unusual in a business where clashing visions are common. The pair have worked together many times in the past and was Moore’s first hockey boss when Sportsnet launched in 1998.

Another likened the move to an under-performing baseball team firing the manager to satisfy the fans.

But the main reason for the drop in ratings has had little to do with production values or the personnel changes instituted by Rogers. While they may play a role, the biggest factor has been the poor performances of the country’s ratings drivers: the Toronto Maple Leafs, Montreal Canadiens and Vancouver Canucks.

It’s going to be interesting to see how Rogers’ NHL coverage changes in the wake of Cutler’s exit. We know that Rob Corte is assuming his duties and taking the role of heading up all live events and studio production, but what will that actually mean? Will Moore and his vision of less business-side coverage, more star-focused coverage become even more prominent? Will there be notable changes in the on-air personnel, or in their assignments? And will these changes happen before the playoffs, or before next season? We’ll have to wait and see, but Cutler’s departure certainly suggests that big changes are in store for Rogers’ NHL coverage.

(Update: This post initially incorrected the man with Cutler as Chisholm, who is not in the photo. It’s Brannagan on the left.)