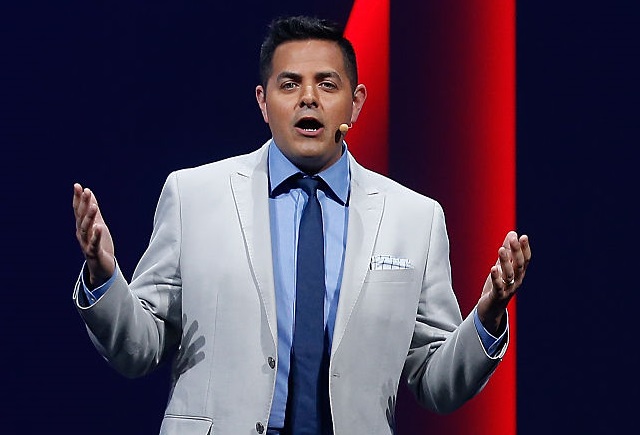 In early February, veteran SportsCenter anchor Robert Flores announced that he was leaving ESPN following a nearly 11-year run in Bristol. At the end of the Facebook post in which he shared the news, Flores mentioned that his new employers would probably announce his next stop in March. Midway through the month, the new gig is now official.

Flores will be joining MLB Network and NHL Network as a studio host beginning March 21. He left one network for two! Well, sort of. The NHL and MLB are partners through MLB Advanced Media, with NHL Network broadcasting out of MLB Network’s operations in Secaucus, N.J. Flores first appearance on NHL Network will be March 23. Additionally, his work will also be seen at MLB.com and Sports on Earth. Branching out beyond the anchor desk will presumably allow for “more creativity,” which he cited in his announcement.

Here is the official release:

March 15, 2016 – MLB Network and NHL Network today announced that veteran national TV anchor Robert Flores will serve as a studio host and appear across both networks’ programming. Flores will make his debut on MLB Tonight on Monday, March 21 at 7:00 p.m. ET, and he will host NHL Tonight for the first time on Wednesday, March 23 at 7:00 p.m. ET. As part of the digital media rights partnership between the NHL and MLB Advanced Media, NHL Network’s daily on-air operations are based out of MLB Network’s headquarters in Secaucus, N.J. Further, Flores will have a key presence across digital media properties, including MLB.com and Sports On Earth.

“I’m excited to be part of both the MLB Network and NHL Network teams, and I’m looking forward to opportunities on their digital platforms as well,” said Flores. “Coming up, MLB’s Opening Day and the NHL Stanley Cup Playoffs are two of the best things in pro sports, and I can’t wait to get started.”

Flores, who can be found on Twitter at @RoFlo, joins MLB Network and NHL Network from ESPN, where he most recently anchored SportsCenter, ABC’s College Football Studio Updates, and ESPN2’s Fantasy Football Now. Flores joined ESPN in 2005 as an ESPNews anchor and later contributed to a variety of studio shows, including Baseball Tonight, NBA Fastbreak, and Friday Night Fights. A Texas native, Flores earned his Bachelor’s degree in Radio and Television from the University of Houston in 1992. Flores attended J. Frank Dobie High School in Houston and is a member of their JFD Hall of Fame.

This announcement confirms reports by the Houston Chronicle‘s Ken Hoffman and The Big Lead’s Ryan Glasspiegel filed shortly after Flores announced his pending departure from ESPN. Glasspiegel mentioned that Flores would also have a role at NHL Network, since the league had a partnership with MLB.