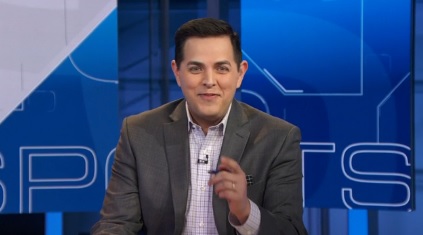 ESPN has seen way more than their fair share of big time departures over the past year or so.  The list is well-known and populated with some of the biggest personalities that have ever walked through Bristol like Simmons, Cowherd, Olbermann and others.  And unfortunately for the self-proclaimed worldwide leader and fans of ESPN, the hits keep on coming.  This time it’s one of the network’s most popular anchors about to bid adieu.

In a Facebook post, longtime veteran SportsCenter anchor Robert Flores announced he is leaving ESPN after over a decade in Bristol:

How are you? In a few weeks, I’ll be leaving ESPN. With almost 11 years in, I’ve never worked at a place longer. Shout out to the GAP for being number 2 on that list. I’ve wanted to work at the Worldwide Leader since I was 20 years old, and in many ways it was a dream come true. I’m excited for this next chapter in my life. I had an opportunity to be on the reboot of Sportscenter’s morning show, but I wanted more; more security, more creativity.

I’ll always be grateful for my experiences at ESPN, and all that I’ve learned; it’s just time to apply those lessons somewhere else. I have so many lasting memories in my decade plus.

While many of the above names gathered millions of Twitter followers or national recognition for their opinion making, and the network (and let’s face it, sports media in general) has leaned more heavily towards opining, the heart and soul of the network is still the SportsCenter anchor rotation.  It’s there where many names like Levy, Cohn, Buccigross, Van Pelt, Czarniak, Harris, Verrett, Everett, Storm and so many others have developed relationships with viewers over a number of years.

Flores was certainly in that upper echelon of SportsCenter anchors, in addition to his excellent work anchoring other programs like Fantasy Football Now.  He was always quick to display his sense of humor and even speak up and hold others on the network accountable when needed.  (Looking at you, First Take.)

At the end of his Facebook post Flores mentions that his employers “should be announcing something next month.”  Flores also mentions that he wanted more creativity and security.  For the record, both Ryan Glasspiegel and Ken Hoffman reported that Flores’ next stop is MLB Network last month.  With SportsCenter going through a number of anchor and format changes throughout the day, perhaps he felt it was time to try something new.