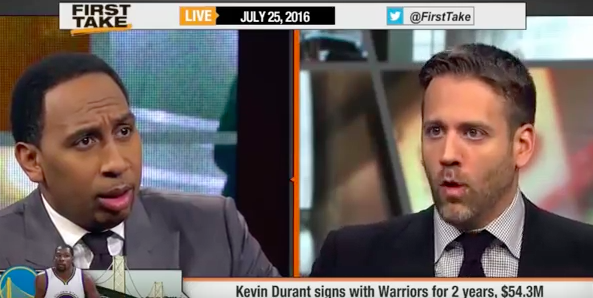 After leaving ESPN Radio, Kellerman went back into cable news by joining CNN in 2010. Here he is hosting a segment about net neutrality, which sounds like some kind of cable television mad lib. Plug in a random host, network, and topic and you could play it too! Imagine Chris Hayes hosting a segment on ESPNU about the SEC vs the Big Ten.

Through all those stops, Kellerman found his groove again by going back to his roots: boxing. In what may be the seminal point of his rise back to prominence in the sports media, he was hired by HBO in 2007 to be a part of their boxing coverage. Kellerman continued to grow in stature at the network, eventually stepping into the analyst role filled so many years by Larry Merchant. Perhaps it was his success at HBO, and seeing the same passion for boxing once again that drew ESPN’s attention in the first place, that led ESPN to give Kellerman another chance on the national stage.

How it mirrors Stephen A. Smith: Like Kellerman, after Smith left ESPN and Quite Frankly, he went into the cable news realm and sports radio and tried to catch on at a number of different platforms before eventually returning to ESPN.

The turning point in Kellerman’s ESPN career may have been when he joined forces with Marcellus Wiley to host a show on ESPN Radio Los Angeles in 2010. That partnership lasted blossomed to the point where ESPN named Wiley and then Kellerman as the new hosts for SportsNation on ESPN2 in 2013. Kellerman’s return to ESPN’s national airwaves was complete, almost a full decade after he left Around the Horn to start I, Max on Fox Sports Net.

Kellerman has certainly taken hold of his second chance at ESPN. Everything clicked in his partnership with Wiley and the pair were able to continue the successful foundation SportsNation had built as ESPN’s light-hearted alternative to the 24/7 sports grind. Kellerman and Wiley also successfully integrated Michelle Beadle back into the program after her brief tenure at NBC Sports.

So when ESPN needed someone to replace Skip Bayless at First Take, it had to be Max Kellerman, didn’t it? There was really no other choice. It’s almost like the fulfillment of a prophecy of old, back when ESPN lifted him up from Friday Night Fights at 29 to be the first host of Around the Horn. This is Max’s manifest destiny at ESPN: to lead the movement of strong opinion at the network.

How it mirrors Stephen A. Smith: Like Kellerman, Smith took advantage of his second chance at ESPN. After working for local ESPN Radio, Smith was brought in as a guest debater with Skip Bayless when ESPN transitioned Cold Pizza into what we know today as the all-debate version of First Take. In 2012, that role was made permanent and Smith’s full-time return to ESPN was complete. Four years later, and SAS is arguably the face of the network… for better or for worse.

It’s amazing how Kellerman and Smith’s careers have mirrored one another throughout the last two decades. The similarities run so deep they even both got suspended for comments around the Ray Rice domestic violence case (albeit under much different circumstances). It used to be that there were only one-way trips out of Bristol, Connecticut and it was rare to see former ESPNers return to the network. Smith and Kellerman have both proven that it is possible to go home again.

When ESPN first went into debate and opinion driven programming in the early 2000’s, Smith and Kellerman were two of its pillars. It took a long and winding road that had quite a few detours along the way, but here we are in 2016 and the pair are now once again front and center of ESPN’s studio programming. Perhaps Kellerman, Smith, and ESPN all needed that time to find their voices and what they wanted to accomplish.

However, if there is one difference, it’s that Kellerman has an opportunity to move First Take in a new direction. To put it bluntly, Kellerman is just more likable than Smith or Bayless. Maybe it’s his stint on SportsNation, maybe it’s that passion and knowledge that comes out in his boxing analysis, maybe it’s the youthful exuberance that was first on display 14 years ago. This might sound weird given Kellerman has been on television since Shaq and Kobe won their last title together, but he doesn’t have the baggage or viewer fatigue that comes with being on TV every weekday constantly yelling at someone or something like Bayless or Smith.

Kellerman has gone on record in saying he will be different than his predecessor. Let’s hope that is the case, because Kellerman can help move ESPN’s emphasis on opinion away from blatant trolling and towards something more informed simply by not being Skip Bayless 2.0.

Will Kellerman and Smith be able to duplicate the chemistry they had with other partners?  Will Kellerman differentiate himself from Bayless?  That remains to be seen. Alas, it feels like Smith and Kellerman been destined to come together for just this moment.  Will they continue growing in influence and notoriety at ESPN and take their careers to previously unknown heights? Will they change the course of ESPN’s “Embrace Debate” movement? Or will the roller-coaster ride resume?