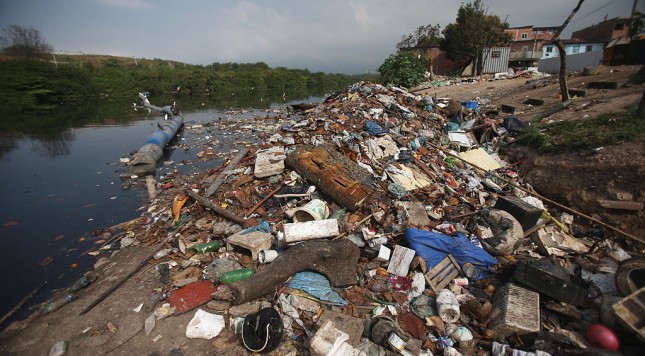 Four months from the start of the Rio Olympics, there are an incredible list of issues facing the Games. As Bruce Arthur writes in The Toronto Star, between the economic crisis, spending cuts, massive political corruption investigations that have Brazil’s president under fire, the Zika virus and the sewage-filled waters that will host the open-water events, things look bad even by the usual pre-Olympic standards. That speaks to a couple of larger issues, though; first, many sports fans still don’t have much of an idea of all the problems with these Olympics, and second, the sports media are going to have to play a significant role in covering those non-sports (or, at best, sports-related) stories.

How bad could things get in Rio? Well, here are some of the highlights from Arthur’s piece:

Beyond just the incredible problems facing Rio, though, Arthur’s column also illustrates how they haven’t yet fully made it into public perception, at least in North America. Yes, there have been stories about the sewage problems and the Zika virus, and even some about the financial crisis, but how much attention are those stories really getting this far ahead of the Games? You can bet that there will still be some viewers who tune in for the Olympics and are surprised to hear about the problems (so NBC will still have to walk the typically-challenging line of covering these kinds of issues as a rightsholder, even if more plugged-in fans may be sick of hearing about them by then).

This also shows why it’s important for journalists covering the event not just to completely “stick to sports.” These issues and others are going to affect the competitions, and they need to be covered to present a full picture of the Olympics. Simply talking about who’s the favorite in the sailing competition is missing the story when there’s a real risk for every athlete who’s competing in those events. Moreover, the Brazil situation is also a reflection of the growing role of sports journalists in covering issues that go well beyond sports.

It’s not that these issues wouldn’t have been discussed at all without the sports events, and it’s not that sports media are the only media covering them. Some media outlets were reporting on what was going on in Brazil even before the country was awarded the 2014 World Cup and then these Olympics. However, huge sporting events such as the Olympics and the World Cup have a way of attracting far more attention to what’s going on in a country. Sewage treatment in Brazil has been an issue for decades, as have massive political corruption, the incredible economic issues  facing the country, and the widespread poverty of many of its residents, but there wasn’t really a particular reason for the average North American to notice or care. When the World Cup or the Olympics is coming to town, though, all of that becomes much more important to the world.

This is further proof of why sports journalism really isn’t the “toy department”, and why “stick to sports” is a silly rallying cry. Sports have always been intertwined with larger political and economic issues (consider Jackie Robinson, Muhammad Ali and John Carlos and Tommie Smith for a few examples), and they’re perhaps more so than ever today, especially with the Olympics and World Cup being held in countries with major problems. From China to Russia to Qatar, putting major sports events in these countries has deservedly led to a much larger focus on the issues in those countries.

That doesn’t mean that every sports journalist at the Olympics is going to actually cover the larger issues, as some will inevitably focus on the trees rather than the forest. It also doesn’t mean that every one that does cover the bigger picture will do a good job of it; not every sportswriter can wear a foreign correspondent’s hat well. However, these kind of events give sports media the kind of platform many foreign correspondents can only dream of; people care much more about the deaths of migrant workers in Qatar when they die building World Cup venues, and they care much more about the conditions in Brazil when it’s gearing up to host the Olympics. On some level, that’s unfortunate; these issues are just as problematic whether or not the country’s hosting a sporting event. There are so many awful things that go on the world that it can be tough to get people to care about any particular one, though, and sports ties help elevate these to further prominence and to the attention of the wider public. Sports media have a vital role to play in telling those stories, and those stories are a key part of the sports events in question.

To go back to Rio 2016, it’s likely to be a case in point here. Just four months out from the Olympics, there are so many massive issues to consider, but they haven’t all come to the attention of the wider public yet. These Games could be an absolute disaster on a number of fronts, with the Zika virus, sewage issues and budget cuts particularly looming large, but the political and economic situations could also cause incredible turmoil, protests and possibly even riots. Off-field issues in Rio are likely to dominate many of this summer’s headlines, and that’s not a bad thing. The Olympics and the media covering them are going to shine a light on what’s going on in Brazil, and that will be a story that goes well beyond just sports.