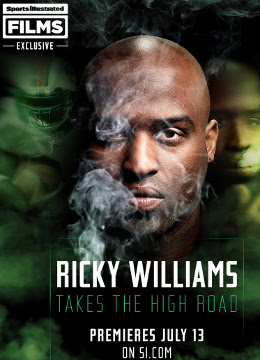 Marijuana has played a large role in the life of college and NFL star running back Ricky Williams, with failed drug tests exiling him to play in the CFL, and he’s now going to be talking about both his relationship with the substance and its implications for the NFL in depth in a new exclusive film for Sports Illustrated. SI announced Thursday they’ll be premiering this film next Wednesday, July 13. It’s part of their expanded coverage with the SI Films unit, and will be released along with an immersive digital longform feature story from Greg Bishop. Here’s the trailer for the film:

The film won’t just cover Williams’ past in the NFL, but a lot of where he is today, including his advocacy for medical marijuana in the NFL instead of painkillers (something that’s receiving growing support from former and current players). As such, it’s going to be headed to some interesting places. From SI’s release:

It is the first in-depth look into the world of Williams today as he discusses everything from his personal experience in the NFL drug testing protocol to the anguish he felt as his image was tarnished, to the perception and prevalence of marijuana in the NFL today and its potential as a medicinal tool. In addition, the film explores his new role as an ambitious entrepreneur in the booming cannabis industry.

…For this in-depth exclusive production, SI joined Williams for a series of shoots on location at the 2016 “Spannabis” World Cannabis Conference in Barcelona, Spain, at the Williams family home in Austin, Texas and on a tour of an indoor cannabis grow operation in Arizona. The SI Films production will run with a feature story by SI senior writer Greg Bishop in an immersive digital longform and in next week’s issue of SI. The Film and exclusive longform special are scheduled to debut on SI.com on Wednesday, July 13.

This is a bit of an unusual story for SI, and it’s cool to see them exploring new turf. Marijuana may be a taboo topic to some, but it’s certainly becoming more sports-related, and medical marijuana and CBD, such as CBD UK, would seem to have the potential to be a big part of football in particular if research and rules change.

Given his presence in both the marijuana world and the football world, Williams seems like an ideal gateway in. The approach of combining film and longform written pieces is a good one, too; it’s worked well for SI with subjects like Caitlyn Jenner, and there’s every reason to think it should work here as well. This will be worth checking out next Wednesday.