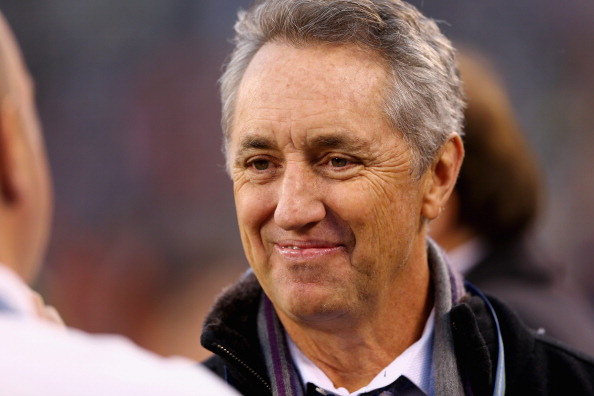 I was a researcher at ESPN The Magazine when The Worldwide Leader hired Rick Reilly away from Sports Illustrated in 2008 and have sadly watched as he’s flushed his own illustrious legacy down the toilet ever since.

At the time he was hired by ESPN, Reilly was the most famous sports writer in America; he was Bill Simmons before Bill Simmons. I remember being ecstatic for the magazine when the news broke and star struck when Reilly took a tour of our office shortly thereafter.

This was a man who had been voted national sportswriter of the year 11 times due to his tremendous nose for great human-interest stories that had the ability to make you laugh and cry — often within the same column.

When he left SI for ESPN for a reported $3 million per year, Reilly was very open about his eagerness to be on television.

“I’ve always wanted to see if a well-written piece could work on TV,” said Reilly at the time. “I’ve been itching to do something different. It’s such a perfect job, I figured I’d try it. I hope I’m not Shelley Long leaving ‘Cheers.'”

Reilly was literally everywhere at ESPN. He wrote for ESPN.com and the magazine, contributed to “SportsCenter” and the network’s golf coverage and even had his own show, “Homecoming,” which was supposed to be the second coming of Roy Firestone’s critically-acclaimed “Up Close.” Instead, it was yanked off the air after 13 episodes in a sign of things to come.

It became clear very quickly that Reilly no longer had interest in being a journalist; he wanted to be a talking head. He’s not alone. Plenty of sports journalists have abolished writing for TV gigs on ESPN. But unlike Tony Kornheiser or Skip Bayless, Reilly was neither funny nor polarizing; everyone agreed that his comedic shtick was predictable and tired.

His back-page column for ESPN the Magazine was terrible and my coworkers wondered aloud, “Can you believe he’s making $3 million per year for this?” Reilly’s work for ESPN.com and the network wasn’t much better, as one-liners were more likely to induce groans than guffaws.

Forget Shelley Long, Reilly had become the Adam Sandler of sports media — a guy who was once great at his craft but now mailing in one piece of crap after another.

And it only got worse.

Reilly mistook Olympic gymnast Gabby Douglas for wounded congresswoman Gabby Giffords, copied and pasted jokes from old columns into “new” ones, tried to erroneously take credit for breaking news about a Ben Roethlisberger shoulder injury and most infamously, misquoted his own father-in-law while arguing that Native Americans don’t consider the nickname “Redskins” to be offensive.

The Internet gave Katie Nolan a standing ovation when she tore Reilly to shreds on FOX Sports 1 in January of 2014 and then gleefully danced on Reilly’s metaphorical grave when it was announced two months later that he would no longer write for ESPN.

But unfortunately for us, Reilly hasn’t given up writing completely; he still has his Twitter account, by which Reilly continues to tarnish his own legacy with a constant barrage of 140-character jokes that sound like a two-bit comic accompanied by a percussion rimshot at the end of each failed joke.

Last summer, there was this painful tweet that made news for the wrong reasons:

Just back from 4 months in Italy. All I wanna do is watch some Letterman, read some Simmons + see how my boy Bruce Jenner is hanging in.

Reilly was panned again this past March when he weighed in on the Colin Kaepernick-to-Denver trade rumors with this deeply personal and tone-deaf observation:

Might be slightly awkward for Colin Kaepernick to come to #Broncos. His birth mother is a Denver nurse + he’s always refused to meet w/ her. — Rick Reilly (@ReillyRick) March 11, 2016

And yesterday, Reilly followed those embarrassing tweets up with this sexist, crude, and just flat-out unfunny two cents about Kevin Durant signing with the Golden State Warriors.

Adding Kevin Durant to a Warriors team that already had Curry + Thompson is like giving Kate Upton a 3rd breast. Nothing appealing about it.

If you’ve taken a look at Reilly’s timeline, you will quickly learn those three tweets aren’t alone, as Reilly has become a parody of himself with a never-ending supply of flat and recycled jokes. There’s the running Kate Upton gag that’s going on five years and grows creepier and more dated by the tweet:

USA to give up Olympic basketball because we win too easily … Kate Upton also giving up bikinis.

Notre Dame is an ACC member in every sport but football. In other news, Kate Upton is your girlfriend in every way but sex. — Rick Reilly (@ReillyRick) September 12, 2012

C’mon @SteveRushin … what was it like spending a week with @KateUpton in Antarctica? How’d you break the ice? — Rick Reilly (@ReillyRick) February 22, 2013

Right now Peyton Manning is like a small boy with jelly all over him. You don’t want his hands on the ball. #Broncos #sb50 — Rick Reilly (@ReillyRick) February 8, 2016

Going to a major to see Tiger Woods on a Saturday is like going to the zoo to see the wooly mammoth. #NewNormal

The copy-and-paste jobs filled in with new subjects like Mad Libs:

Rooting for Alabama to win the game is like rooting for Ryan Gosling to get the girl. — Rick Reilly (@ReillyRick) September 14, 2013

Rooting for #Kentucky to win the Final Four is like rooting for George Clooney to get the girl. #GoWisconsin

Pulling for the #Orioles in this. Rooting for the Yankees is like rooting for Ashton Kutcher to get laid. — Rick Reilly (@ReillyRick) October 12, 2012

The knee-slappers about boobs and women:

Hey, Heidi Klum, would you be interested in a complimentary basket of Derek Jeter memorabilia?

The Broncos getting two TDs on special teams is like Dolly Parton getting free breast augmentation. — Rick Reilly (@ReillyRick) September 29, 2013

Maybe Gisele has her panties in a bundchen because Tom Brady is 0-2 in #SuperBowls since he got with her?

The not-so-wisecracks made while beating a dead horse:

Waiter just brought the check. My friend backed away from it like Cam Newton from a fumble.

And the flat-out cringeworthy musings:

Time of possession to Chip Kelly is like a Chippendales calendar to Ellen DeGeneres. #Eagles — Rick Reilly (@ReillyRick) November 17, 2013

Ochocinco making it to the Superbowl and not getting to play is like Ellen Degeneres getting to Flashdancers after it’s closed.

I think I know why this place in Paris is empty. pic.twitter.com/LWxgAXxEF0

Reilly not only tarnishes his own legacy with each facepalm-inducing tweet, he draws attention away from the amazing charity work he has done in the last decade to fight malaria in Africa. A 2006 column requesting contributions for the cause led to the formation of the Nothing But Nets foundation that has raised over $60 million.

But instead of remembering Reilly as one of the greatest sports writers ever who has saved countless lives through his charitable work, each ill-advised tweet instead makes Reilly’s name more synonymous with “washed-up hack.”

So please Rick, do yourself and the rest of us a favor and make the next button you hit on Twitter say “Deactivatee my account.”