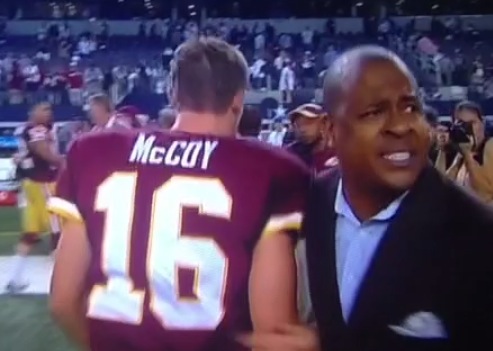 Teams’ public relations staffers sometimes takes issue with particular lines of inquiry from journalists, but it’s unusual to see that happen over an obvious subject the journalists seemed to make it clear they were going to ask about. That’s what appears to have happened with Pete Mundo (who AA readers may remember from Houston coach Tom Herman’s rant about his reporting; Mundo’s reporting was never disproved in that case), who works for CBS Sports Radio and Fox News and also runs Heartland College Sports, a Big 12-focused website.

In that latter capacity, Mundo sent an e-mail to Tony Wyllie, the Washington Redskins’ senior vice president in charge of communications  (who’s taken a lot of heat in the past, especially from Deadspin, but also from this site and others), asking to interview Redskins’ backup QB Colt McCoy about his time at Texas and his NFL career. Wyllie set that up, and Mundo did the interview, but Wyllie then called Mundo Tuesday to rant about the questions he asked, which Mundo related on Twitter:

How is Colt McCoy getting hurt in Champ Game is topic to avoid? That might be the most insane thing I've ever heard in my life.

And if you don't want to answer Q about kids playing football say "I don't know, I'll cross that bridge when I get there"

I was told by @Redskins PR that McCoy felt "blindsided" by me asking him about 2010 Champ Game. How is that humanly possible?

For the record, b/w day job in media and running this site, done hundreds of interviews, never been ripped 4 misrepresenting subject matter

Mundo told Awful Announcing it was “one of the more bizarre and angry phone calls I’ve ever received,” and went on to explain in more detail:

Tony Wyllie is the Redskins PR guy who called me… started off ripping me and said ‘never call us for an interview again’. I tried to calm him down to no avail, which is when he told me I was out of line asking him about the 2010 National Champ Game and if he would let his future kids play football. 1) The injury in 2010 Nat’l Champ Game is arguably the most notable storyline of McCoy’s career… Tony told me “dude that was nearly a decade ago! Why are you asking him about it?” Is he serious? 2) I asked plenty of softballs leading up to that (if you listen) 3) As I put in twitter, if you don’t want to answer about concussions, which literally is asked by any radio/tv/podcast person in media today when interviewing a current or former football player, just say “I haven’t thought about it much yet” (he didn’t say that and gave a really good answer about why he would let his kids play) … Tony said I ‘misled’ him and Colt about the interview subject. …The whole thing is so bizarre. I reminded Tony I work in media and have done 100s of interviews and never received a call like this. He didn’t seem to care.

Mundo provided AA with a copy of his e-mail to Wyllie requesting the interview, which makes it clear he was going to ask about McCoy’s time at Texas (which would obviously seem to include that game and that injury):

I wanted to request a 10-12 minute interview with Colt to discuss his time at UT, NFL, and what he’s up to now. We like to bring on former Big 12 faces that fan bases are interested in. We recently have interviewed Ryan Broyles, Graham Harrell, Zac Robinson and others.

Getting upset over that in particular seems highly unreasonable; it would be ludicrous for a Big 12-focused site to interview McCoy about his Texas career and not mention that game and that injury, and if McCoy was “blindsided” by that, he needs better pocket awareness. There might be more of a case for being mad about the “would you let your future kids play football” question, as that wasn’t explicitly stated in Mundo’s interview request, but as he notes, it’s not exactly an unusual question either (and McCoy had a good response to it).

If Wyllie’s call played out the way Mundo says it did, it seems highly questionable; why would you be so worried about asking about that injury and about if he’d let his future kids play football?

This interview is hardly a hit piece. It’s a chat with McCoy about his past and future, and one that seems very similar to most conversations with football players about their college careers. If Wyllie takes issue with that, you have to wonder how he’ll deal with pieces that are actually critical, or material about the Redskins’ ongoing name controversy.

Actually, we know; after all, he’s the one who said the Redskins were firing “a warning shot” to media with their 2011 lawsuit against the Washington City Paper over their critical reporting. Deadspin’s pieces on him suggests he hasn’t dealt well with other controversies, either. Still, it’s bizarre to see such substantial pushback over something seemingly so innocuous.