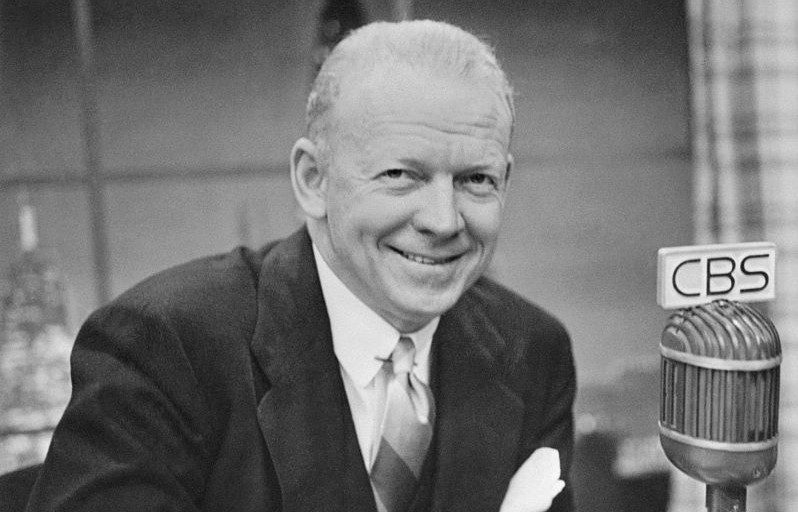 After 67 years behind the Dodgers’ mike, Vin Scully, 88, is retiring to a flood of heartfelt tributes. But 50 years ago this month, his mentor and father like figure Red Barber was unceremoniously fired by the Yankees. Considered by many as the progenitor of baseball on radio, Barber, just 58 at the time, never returned to daily play-by-play.

The mid 1960s were among the worst in Yankees’ history. After partaking in five straight World Series, the team sputtered, finishing 77-85 in 1965, 25 games behind the American League champs, Minnesota Twins. Yankees’ attendance slipped to 1.2 million, a far cry from the better than 3 million they draw today. In 1966, they finished dead last in a non-divisional, 10-team American League.

September 22, 1966 was a raw and drizzly day in the Bronx. Earlier, more than five inches of rain pelted Fun City, as New York was dubbed by then mayor, John Lindsay. It was the greatest deluge of rain the city suffered in 33 years. The Yankees hadn’t played for five days and field conditions were hardly inviting. Driving to the stadium and listening to his car radio that Thursday morning, Barber expected an announcement at any minute that the meaningless makeup game against the White Sox would be called. But Barber arrived at the ballpark and was told it’s on.

Strikingly, only 413 fans showed up at the cavernous ballpark, the smallest crowd in the stadium’s glorious history. John Filippelli, a current broadcast executive with YES and then a teenage vendor at Yankee Stadium said, “It was very spooky, surreal and strange.”

Barber felt strongly that the empty stadium was the story and asked that the cameras pan the empty park. But Perry Smith the team’s broadcast head wouldn’t allow it. Red talked about the eerie emptiness anyhow, “I don’t know what the paid attendance is today, but whatever it is, it is the smallest crowd in the history of Yankee Stadium, and this crowd is the story, not the game,” he said. The Yankees lost to the White Sox that day 4-1.

Because there were rumors about his future with the club and the season was coming to an end, Barber requested a meeting with Michael Burke who had just been appointed the Yanks’ president by the team’s new owner, CBS.  They met for breakfast on Monday September 26th and before Red finished his first cup of coffee, Burke told him his contract would not be renewed.

Barber asserted that he was fired for maintaining his journalistic integrity when the stadium was virtually empty. And over the last fifty years, others have summarily and faithfully accepted Barber’s account. But there’s more to it.

Barber came to Brooklyn from Cincinnati in 1939 and served as the Dodgers’ first announcer. Until then, none of the three New York teams had broadcast their games on radio. Fans and listeners loved Red’s homespun idioms and slow paced drawl which were redolent of his southern roots.  (“The bases were FOB,” [full of Brooklyns] or “He’s sitting in the catbird seat.”)  And in 1950, Barber added Scully to the Dodgers’ broadcast team, taking the 22 year old under his wing and launching broadcast baseball’s most celebrated career. But when Walter O’Malley took control of the ballclub, Red quarreled with him and he was eventually let go at the end of the 1953 season.

Barber was then hired by the cross town Yankees, where he teamed with Hall of Fame broadcaster Mel Allen. Ostensibly the two play-by-play giants got along but Red would later complain privately that “Mel interrupted me on-air.” In 1978, Barber and Allen were the first two recipients of the Hall of Fame’s distinguished Ford Frick award for broadcasting excellence.

Old-school, both Barber and Allen resented athletes who became broadcasters. When Phil Rizzuto retired as the Yanks’ shortstop to join the club’s announce team in 1957, the two men walked out of the booth during the team’s initial spring training broadcast, leaving Rizzuto there, all alone, to do his first assigned innings. Rizzuto never forgot it.

At the end of the 1964 season and to the shock of the baseball world, the beloved Allen was dropped. Yankee owner Dan Topping told Red that Mel “popped off too much.” (“He was the saddest looking man I ever saw,” Barber said, describing a numbed Mel after being told that he would not be renewed.) With Mel gone, Barber felt deputized by Topping to take command of the Yankees’ booth, including finding Allen’s replacement. But the Yankees instead brought in Smith who hired ex catcher Joe Garagiola, joining Barber and incumbents Jerry Coleman and Rizzuto.

So beginning in 1965, Barber had to contend with three ex players. He was particularly irked by Garagiola, saying, “He cut in on me in middle of my sentences and I told him so.”

In Brooklyn, when Scully was under his wing, Barber was pedantic. He lambasted him after he had a beer in the press room before a game.  And after Scully brought up the line-up cards from the field one day, Barber admonished him for not finding out why there were changes in the usual hitting slots. When Scully said on-air that Willie Mays was the best player he ever saw, Barber told him, “No one cares what you think.”

But unlike a young and moldable Scully, veterans Rizzuto, Coleman and Garagiola didn’t appreciate Barber’s fussiness. In other words, friction kept growing in the Yankees’ booth through the 1966 season.

For financial reasons, the pregame show that Barber hosted on television was cut. He complained about it at a meeting during spring training which didn’t sit well at the time with Smith or management. Slowly, Barber felt like the odd-man out and at the end of the 1966 season, the fastidious pioneer was indeed gone.

Garagiola later postulated that Barber was fired because he was bossy in the booth and annoying to his fellow announcers. He felt that Barber himself played up the story about dictating that the cameras focus on a near empty stadium to appear sanctimonious.

“I said there are more people going to confession at St. Patrick’s than there are people at the ballpark and Mike Burke didn’t say anything to me,” Garagiola proclaimed.

Barber and Scully were both making roughly $50,000 a year in 1966 (about $370,000 in today’s dollars). In the fall, Scully called another World Series and went on to enjoy fifty more years of broadcast glory. That fall, the iconic Barber went home to Florida. His baseball play-by-play days were essentially over.