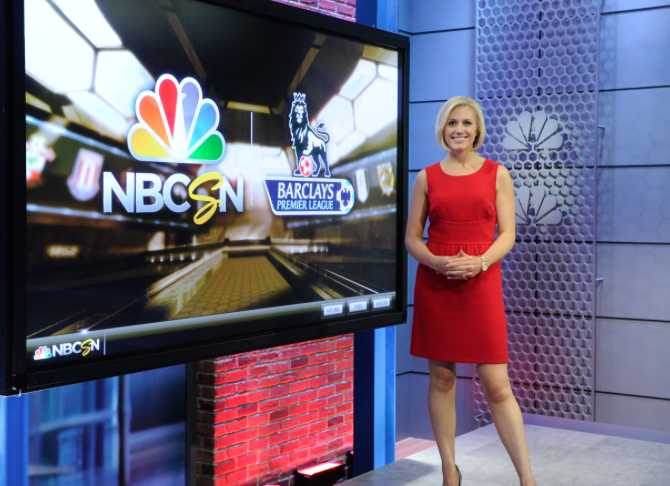 Since NBC obtained the English Premier League rights in 2013, it’s been widely praised for its coverage from its studio with Rebecca Lowe to the game broadcasts called by Arlo White. Now with the Peacock firmly cemented with the EPL through the 2021-22 season, it has reupped both Lowe and White to new six-year contracts keeping both through to the end of NBC Sports Group’s deal with the league.

It provides stability to viewers who have grown accustomed to watching games on NBC/NBCSN/NBC Universo/Telemundo since the 2013-14 season and USA Network starting this season.

Sports Illustrated’s Richard Deitsch broke the news of the NBC signings, but the Peacock would not comment officially.

And with Lowe giving birth to her first child, it means that she’ll be going on maternity leave in March, meaning NBC will have to utilize others to host Premier League Live, Goal Zone and Match of the Day while she’s gone.

According to the Daily Mail in the UK, Lowe’s contract is in the neighborhood of $1 million per year.

NBC tapped Lowe from ESPN UK after the network lost its rights to the EPL and she’s been popular in her role as studio host ever since. Some US viewers got their first viewing of Lowe when she was a host on ESPN’s Women’s World Cup coverage in 2011 and did a solid job.

As mentioned earlier, play-by-play man Arlo White has also signed a new contract to remain as the voice of the EPL on NBC. He was originally tapped by NBC to be the lead voice of its MLS coverage, but when the Peacock obtained the EPL, White went across the Atlantic Ocean to go home to call the games.

So NBC has kept its top talent for the English Premier League. We’ll see if the network decides to retain the two Robbies (Earle and Mustoe), Kyle Martino for the studio and its game analysts for the duration of its contract.