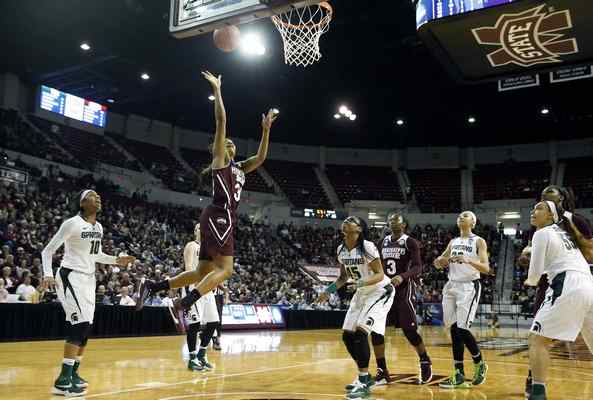 The NCAA women’s basketball tournament has been working out well so far for ESPN, with first and second-round regional and national coverage from last weekend drawing an average of 343,000 viewers. That’s a rise of 46 percent from last year’s 235,000, and it’s also the highest average since 2013’s 398,000. These ratings have come despite criticism of ESPN’s decision to use remote announcers for six of the first- and second-round games, which motivated UConn coach Geno Auriemma to say “I don’t imagine that it’s happening on the men’s side at all.” However, ESPN senior vice president for production and remote events Mark Gross told Doug Feinberg of The Associated Press that he was happy with how those broadcasts went and that doing them remotely saved ESPN money, but didn’t impact the production.

“It does cost more when the talent is on site,” Gross said. “Whether it’s an extra camera or two for the talent, extra audio packages for the talent, a more robust audio setup. If they needed to expand upon the truck that’s in the parking lot. Everything gets amped up a little bit more.”

Gross wasn’t sure exactly how much ESPN saved, and the network declined to release figures. Gross said ESPN would put some of the money back into the women’s Final Four, using the virtual 3-point line that ESPN started implementing on its NBA broadcasts.

…“We are fortunate to have great partners with the NCAA and the college leagues and NBA and MLS,” Gross said. “We’re up front with them and promise it won’t impact the production. If it does, we’ve got to back off and rethink how we’re doing this.”

Not everyone will buy Gross’ claim that it doesn’t impact the production. If there was no impact, ESPN and other networks would do this for every event, and fan complaints wouldn’t consistently roll in when they do this. Feinberg’s piece also notes that this can cause particular challenges during injury timeouts or video reviews, as officials and sports information directors can’t just walk over to the announcers to explain what’s going on. However, announcer Brooke Weisbrod told him there are some advantages too:

Brooke Weisbrod, who called three of the games remotely from ESPN’s studios in Charlotte, has done broadcasts that way before for both ESPN and the Big Ten. So doing an NCAA Tournament game remotely wasn’t too difficult.

“You do everything that you’d normally go through. Put the headsets on, go through the normal checks,” she said. “Because we’re standing up calling the game instead of sitting behind a table, I felt more energetic. The sound and environment is different than when you’re at a game, but it’s pretty easy to fall right into.

“You’re in a studio room and have access to all different types of looks and takes. You have a stats person and the same trends you do when you’re at the game. You actually have a better view because if I’m sitting at an arena, sometimes you can’t see the action if the coach or the ref is standing in front.”

Obviously, an ESPN announcer is unlikely to trash this concept, but Weisbrod’s points on extra access to different angles and an uninhibited view are worth considering too. It’s become clear in multiple sports that fans and officials off-site sometimes have better views of what happened thanks to TV, which has been part of the expansion of video replay. However, the challenge is that announcers at a game usually have access to both their own eyes and the TV feed on their monitors, and that’s historically proven better; it provides the advantages of TV, but also announcers to notice what’s not caught by the primary TV camera and to discuss the atmosphere and energy in the building.

Just seeing more angles and not having refs in the way doesn’t seem like it completely cancels out those advantages of being there. However, the in-studio announcing trend seems likely to be something that only expands further in the future. The savings are substantial; Feinberg’s piece notes that the Pac-12 Networks saved up to $10,000 a game by doing remote production for 100 basketball games this season, and most of those still had on-location announcers, so doing it all remotely might be even cheaper. In an era of rising rights fees and falling revenues, that’s very appealing for networks, regardless of if it brings criticism.

[AP, via The New Haven Register]