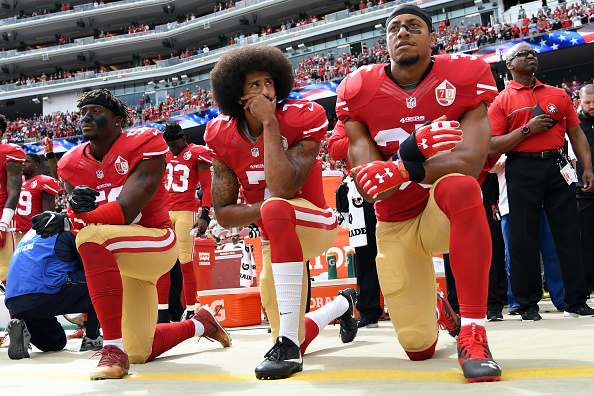 NFL ratings in 2016 are down. While there are many theories including weak national primetime matchups, the Presidential election, cord cutters, millennials, your mom’s gout (ok, maybe that’s a stretch), perhaps there’s one reason we haven’t thought about. A Rasmussen poll finds that 32 percent, almost one-third of 1,000 Americans surveyed say they’re less likely to watch NFL games over the Colin Kaepernick-led protests over the national anthem.

Kaepernick began protesting the national anthem in August and it has spread throughout the NFL as some players have chosen to kneel on the sidelines rather than stand at attention.

The Rasumussen poll also finds that the results are broken down via racial lines. Twenty eight percent of African-Americans say they’re more likely to tune into the NFL while just 8% of whites are more likely.

However, many observers dismiss the results as Rasmussen polls tend to lean more Republican than other polls. Still, the #BoycottNFL movement among conservatives has been gaining traction as they see the anthem protests as an affront to the military.

But there are other factors as Michael Mulvihill, Senior Vice President of Programming, Research, and Content Strategy for Fox notes. He says the Sunday afternoon regional windows are suffering a lower ratings hit than the national primetime windows due to the interest in the national elections:

The Sunday afternoon networks, which rely on having many home markets, are holding up better than the more marquee-driven primetime games.

He also cites the lack of big names such as Peyton Manning, Tom Brady and Tony Romo in the first four weeks and when you don’t have them in primetime, those are the games that will get hit more than the local regional windows.

So Mulvhill is not buying the Kaepernick-led protest boycott as a factor, but overall, the numbers are down and until they go back up, we’ll continue to see various theories as to why viewers aren’t watching in 2016.