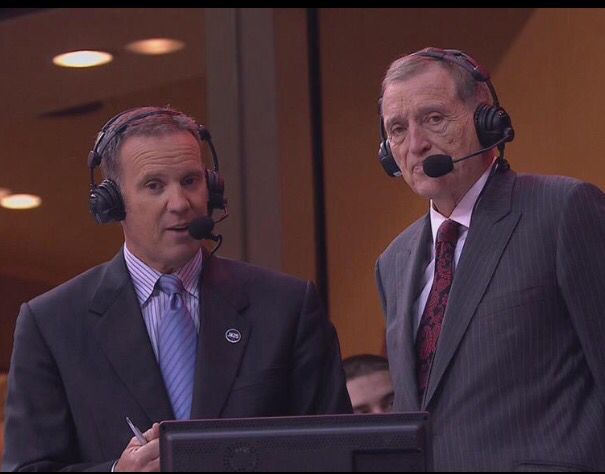 It’s rare to see a team undergo wholesale turnover in its local TV and radio broadcasters, and even more rare to see a team instigate that when those broadcasters are still under contract. That’s apparently what the NBA’s Portland Trail Blazers have done, though, with Joe Freeman of The Oregonian reporting that the team has parted ways with TV play-by-play man Mike Barrett, TV analyst Mike Rice and radio analyst Antonio Harvey, opting to only retain radio play-by-play man Brian Wheeler for the 2016-17 season.

That’s a big shakeup, as all three of those guys have been long-time voices of the team. Rice joined the team in 1991 as a radio analyst and stayed in that role through three different broadcast partners until switching to the TV side in 2005, where he’s been ever since. Barrett came on board in 1999 in a variety of TV and radio roles before becoming the regular TV play-by-play man in 2003. Harvey played for the team from 1999 to 2001 and replaced Rice as the radio analyst in 2005. All three also signed two-year contract extensions last year, so they’ll be paid for this upcoming season. Barrett tweeted Wednesday that he was “blindsided” by the news:

Thanks friends. Your words have been humbling today. Blindsided but not at all bitter. The relationship with you is what I'll miss most.

Freeman reports that Harvey won’t be replaced, with Wheeler handling radio broadcasts solo next year. The team’s release says they “will focus our efforts on a national search to fill our open TV broadcast positions, with the number one goal of bringing in top-notch talent that our fans will be excited to watch during Trail Blazers broadcasts.” However, these guys were already quite popular with the fans; they placed 8th out of 30 in our regional announcer rankings earlier this year, and 45.93 per cent of voters there gave them an A (the third-highest raw total in our rankings). This move’s already taken plenty of criticism from those fans, with 3,454 (as of early Thursday morning) signing a petition to keep Barrett and Rice and many more chiming in with strong tweets:

Because @mikerice6 and @blazermb will no longer be broadcasting I will watch all games next year with the T.V. on mute thanks @trailblazers

Thank you @mikerice6 n @blazermb u guys are #legends. First they rename the ROSE GARDEN now they fire my guys. When will the bleeding stop!

Mike Barrett and Mike Rice were the fans security blanket during the bad times. Rip City is in their DNA. You can't replace them.

@blazermb Can you just skype us while watching the game and do the play by play? I'd be okay with that.

So, why make this move? Freeman’s piece suggests it might be part of the team’s larger plan to try and get a bigger regional rights deal:

Rice, Barrett and Harvey signed two-year contract extensions last summer, so they will be paid next season. The Blazers are expected to begin a search for a new television tandem soon, but they do not plan on replacing Harvey. Instead, Wheeler will call games by himself.

The timing of the Blazers’ broadcast shakeup is noteworthy because their 10-year contract with television partner Comcast SportsNet Northwest expires after the 2016-17 NBA season and the team has been plotting its broadcast future for months.

Comcast, which leans on the Blazers as its flagship partner in the region, submitted a new contract offer earlier this year during an exclusive negotiating window. But the Blazers — long frustrated by Comcast’s lack of distribution — have been fielding offers from other potential partners for weeks and it’s possible they will move in another broadcast direction. For nearly a decade, Blazers games have been unavailable to satellite television subscribers because of national distribution disagreements between Comcast and DirecTV/Dish, leaving a large percentage of Blazers’ fans in the crosshairs of a corporate kerfuffle.

Oregonian columnist John Canzano also suggests that angle in his piece, which is full of strong criticism for the organization:

At the root of it all on Wednesday is a sin that has plagued Trail Blazers Inc. since Paul Allen bought it — hubris.

You may not have loved Rice, who could be wild and opinionated. You may not have enjoyed Harvey, an ex-player who lacked formal broadcast training. Maybe you didn’t even feel Barrett, who I happen to think is one of the best around. But what the Blazers have effectively done in removing all three at once is ensure that they’re alienating all corners of the fan base in one big move.

Because unless this is a precursor to a seismic broadcast shift (dumping Comcast SportsNet Northwest for Seattle-based ROOT Sports?) it makes zero sense.

We’ll see how that petition progresses and who the Blazers decide to bring in, but for now at least, this looks like another problematic case of a team publicly ousting popular broadcasters.