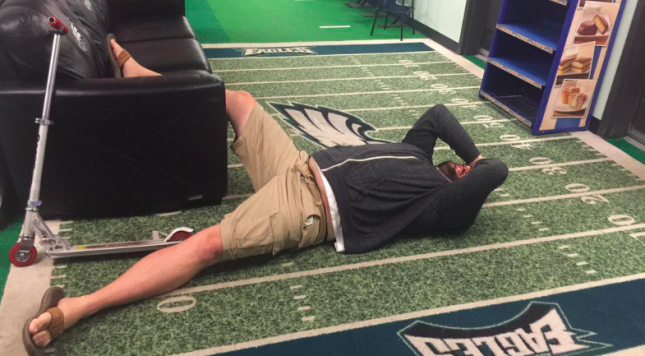 There’s been a firing over white Philadelphia radio producer Pat Egan posing as a black caller to his own station for years, but it’s come at a competing radio station. Egan works for 97.5 The Fanatic, and that’s where he called in as racist stereotype “Dwayne From Swedesboro” to afternoon host Mike Missanelli (who was reportedly unaware of the real identity of “Dwayne”).

This story was broken by Crossing Broad Monday night, and The Fanatic doesn’t appear to have officially commented on it as of Wednesday night, but it’s led to the firing of competitor Josh Innes of 94.1 WIP. Why’s that? As Jim Adair writes at Crossing Broad, Innes decided to play this up for all it was worth, and devote his Tuesday show to racist mockery of the competition:

Josh Innes opened his show today by playing the Nitty Gritty Dirt Band’s “Mr. Bojangles,” letting the song ride out until the line “He danced for those in minstrel shows and county fairs,” when Innes chimed in. He opened by asking “General Knowledge question: What station is now a minstrel show in Philadelphia?” Surprisingly, he moved right on to discussing the new Madden game and the show’s plan to run season simulations to predict the Eagles record right after that. For a couple minutes, he’d just drop a passing shot at Miss here – “No need to go anywhere else today, you’d probably just hear some fake callers talking to some fake hair dyed radio hosts” – and there – “callers named Dwayne hop to the front of the line.” But after a long commercial break, he went off:

…Innes: “People are tweeting me about – I’m gonna start calling Mike “Soul Man” now – but Soul Man or Al Jolson whatever you wanna call him, but I’ll go Soul Man – it was a C. Thomas Howell movie where a guy takes a pill to be black – so evidently over at 97.5 they’re a bunch of soul men over there and their whole schtick is that they have fake callers. And then what I’m being told by people on twitter is they’re trying to paint is as everyone in the world has fake callers to the point that they’re referencing Howard Stern and saying the whack pack…no the whack pack are actual whackos who called in because they could get people to call into their radio show and don’t have to fake it. I mean you’d think with your lame, lousy questions, real people would call up and answer your softball, general knowledge garbage, but as it turns out, your callers are as fake as your hair.

From what I understand, Soul Man is saying he knew nothing about this and that he was duped. So of course Soul Man, who is a guy that regularly is offended by everything because he’s so consumed by white guilt that he has to get up and stump for every offensive cause and tell you how awful you are…”

…And not just fake callers, guys who are WHITE pretending to be BLACK guys. Like, that’s what makes me laugh about all of this. Mr. Soul Man, who is offended by everything…white guilt to the nth degree and he pretends to be boys with all his brothas, HE WOULDN’T LET YOU MOW HIS FREAKIN LAWN on the Main Line. Oh but on the air he’ll pander to you hard and you’ll buy it because you think brothers are actually calling the show. Turns out it’s a WHITE GUY pretending to be black calling the show.”

Innes has a long history of verbal war with Missanelli, which escalated into a heated confrontation at an Eagles’ practice last year, and he also has a history of problematic remarks on race, such as calling Eagles’ centre Jason Kelce a “house Negro” in January (which got him suspended). The on-air remarks aren’t the worst part, though. That might be this tweet: 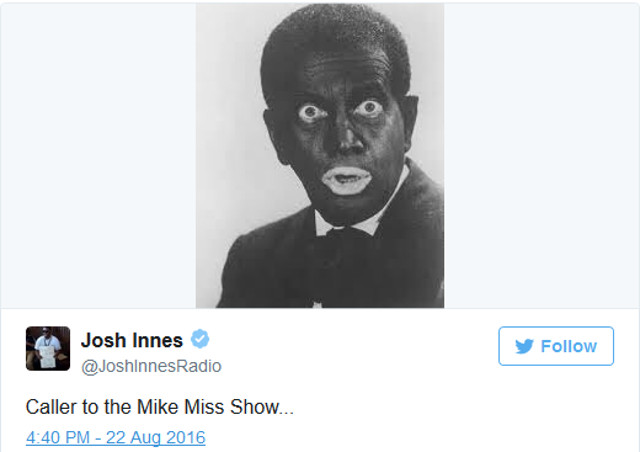 However, as Dan Levy points out at Billy Penn, the firing may have been more about a chance to get rid of a guy who just wasn’t worth the problems he caused any more:

Honestly, is that enough to get Innes fired, or was this a way to get him out after sagging ratings and being a general headache for the WIP higher ups? As someone in the industry said when hearing about his ouster, “in some ways it will be a shame if he got fired for racial comments as opposed to the reality of sucking and getting bad ratings. Because now Innes will be able to play the martyr role.”

If he does, it will be in another town. That’s if anyone will have him.

Innes has long said he’s had offers elsewhere, and radio jerks around the country always seem to get jobs somewhere, but this might give program directors pause. If you’re too edgy for WIP — Wing Bowl still exists, yes — who in their right mind will want you?

“You can’t be an asshole to everyone.”

Regardless of WIP’s decision here was about actual offense to Innes’ comments and actions or if they just saw this as an opportune time to jettison him, it’s certainly interesting to see a firing over this come not at The Fanatic, but at their competitor. It may be the only one; Missanelli’s been trying to downplay the story (while still talking about it a lot), and no one at The Fanatic seems particularly bothered by this (despite ESPN’s Bomani Jones and others criticizing them).

This isn’t a good look for them, though, and it also led to former Fanatic intern Alex Reardon detailing numerous accounts of sexual harassment she experienced while working there. So, there’s plenty of problematic behavior to go around here, which isn’t exactly surprising given the larger problems in sports radio. Innes is just the only one who’s been punished so far.