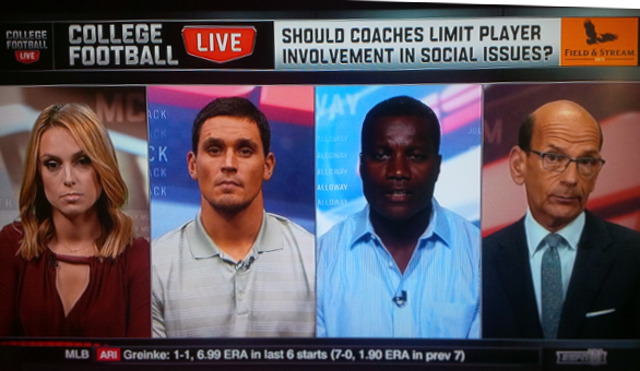 ESPN’s Paul Finebaum is known for his provocative stances on college football, but he took one on a different level this week, complaining about San Francisco 49ers’ quarterback Colin Kaepernick’s anthem protest on both Monday’s Paul Finebaum Show and Tuesday’s College Football Live.

On Monday on The Paul Finebaum Show, Finebaum went in on Kaepernick in a conversation with Marcus Spears. When talking about the American flag’s origins in the War of 1812, he said “This country has issues, but this country is not oppressing black people.”

The full clip of Finebaum’s Kaepernick discussion with Spears on Monday’s edition of The Paul Finebaum Show can be heard here, starting around 23:30 and continuing through 34:45:

“I agree with David, I think it’s totally disrespectful to sit,” Finebaum said. “And others have said it and will continue to say it, for the men and women that have given their lives for this country. Having said that, I think Colin has every right to do whatever he wants, and that’s what makes America the country that it is. Disrespectful, yes, but well within his rights.”

Those comments provoked a strong reaction from Joey Galloway:

“There has to be a platform to create conversation, and I don’t know that Colin Kaepernick could have done a better job of creating conversation to deal with some of the issues that are going on,” Galloway said. “It is very easy to say I disagree with doing it at that time, but I don’t know that there’s a better time that would catch the eye of America and say ‘There’s something we need to talk about here.’ And not just focused on the fact he said that, but more focused on the reason why he did it.”

Finebaum then interrupted with “Let me ask you,” while Galloway continued with “That is his right to do that at that time.” Finebaum kept talking over him and went to “I’m really curious, though, and he did it, but I’m not sure what this conversation is really all about. We have this dialogue in our country continuously, and I thought LeBron and others at the ESPYs made a really strong statement, but this looks to me like a little bit of an outlier. These are issues that politicians. elected officials, the public like us talk about every single day. There are serious problems in this country, but ultimately, what’s helped? What’s the end result of what Colin did the other night?”

Galloway then responded, “Well, we’ll find out, but you don’t get to choose or decide how someone else protests. If that’s the case, then no one would have a protest. It would just be decided for them.”

Finebaum interrupted with “Usually people protest when they’ve been oppressed, when they have a legitimate stake in the action. I don’t know where Colin is coming from. What’s his beef with society, other than he’s upset with how, in his mind, people are being oppressed in this country?”

Pollock then started to talk, but Galloway cut in with “What do you mean, what else? As if that’s nothing?”

Finebaum backtracked to “Well, it’s obviously very important, but why him?”

Pollock said “You ask what he accomplished, Paul, and we’re talking about it.”

Finebaum said “Well, okay, but we would be talking about something anyway.”

Pollock continued with a shot at Finebaum’s opinions, saying “You say outlandish things sometimes, that’s because people talk about them. That’s what this country is, you draw attention to things.”

Finebaum then interrupted with “I don’t think this country’s built and based on people doing outlandish things so the Twitterverse reacts. I think when you have a strong statement to make, when you feel oppressed and you’re trying to help enact change, I don’t understand where Colin is coming from in terms of this specific issue. He’s upset about the way minorities are being dealt with, in his words ‘oppressed,’ he’s talking about police brutality, sitting down during the national anthem, I don’t think is the connector to those issues.”

Galloway then responded with”How you feel about that doesn’t actually…that’s the thing, you’re taking your feelings and putting them on his situation. If that’s the way he feels, then he has the absolute right to feel that way…”

Finebaum interrupts with “I’ve never done anything like that.”

“I didn’t say that!” Finebaum shot back.

Galloway said “He has explained what his reason is, and that’s the thing, you don’t get to decide for him what is legitimate, the way he feels,” Finebaum interrupted with “I promise you, my friend,” but Galloway continued with “A lot of people have felt the same way, so if he continues to protest in his way, as David said, that is his right.” Finebaum interrupted with “But I have the right, and you have the right, and David has the right to either agree or disagree respectfully, and I have.”

The two then talked over each other again, and then Finebaum said “He’s entitled to it, he has that right under the First Amendment.”

Things then calmed down somewhat from there with Pollock commenting on how this might lead other college protests, but Molly McGrath then asked Finebaum what coaches’ responses should be.

“Well, I think there are going to be issues like this, and I was behind what the Missouri players did last year,” Finebaum said. “I thought they had a legitimate gripe. They were standing up for their own. They at least had a protest. And Coach Gary Pinkel supported them, and those who stood in the way ended up losing their jobs, the president and the chancellor and others. I think you’re going to see a trickle-down effect, and I’m all for it, I think young people have every right to stand up for what they believe in, I think they should pick their battles carefully, so it’s not just someone screaming just to scream, but I think America’s youth are very active and I encourage them to speak out, but be careful on the issues and make sure they can resonate as opposed to just screaming ‘Fire’ for the sake of screaming ‘Fire.”

Galloway responded “I think again you’re getting into that place where it feels like you’re deciding for other people when is the right time, how they should do it, and then how you feel about the reactions they had, as in ‘Okay, I agree with this one, but I disagree with that one.’ The key is we’re in a country where you have the right to protest in your own way, and if that’s the way you feel about what you’re doing, then you have the right to do that. And whether or not I agree and think your issue is right and the way that you handle your issue is right, I don’t understand why that becomes important as opposed to ‘Let’s look at the reason why this protest is going on, is that something we should be discussing?’ And I do believe that what he’s talking about is something that should be discussed.”

Galloway’s responses to Finebaum received a lot of Twitter support:

@Joey_Galloway MAJOR props & respect for you for not only WHAT you said, but HOW you said it! Very POWERFUL w/o yelling over @finebaum @espn

@finebaum Joey Galloway handled your condescending manner and chuckling far better than he should have. You deserve to get cussed out.

Well done @Joey_Galloway . I don't know how you didn't start yelling at that personification of white privilege, Finebaum. Respect, brother.

So, Finebaum has some awfully hot takes on Kaepernick, and ones some of his coworkers strongly disagree with. We’ll see if anything further comes from this.