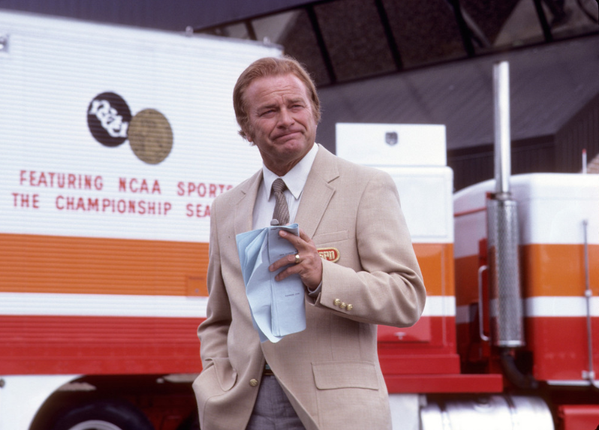 When you look at the early days of ESPN, several names stand out, Dick Vitale, Chris Berman, Bob Ley, Tom Mees, Greg Gumbel, Paul Maguire, Cliff Drysdale and Jim Simpson. He died Wednesday after a short illness. His family said Simpson was watching the Green Bay-Washington NFL Wild Card Game on Sunday when he fell ill and had to be taken to the hospital. He was 88.

Back when ESPN was in its infancy, the network needed a play-by-play voice who would give the network some credibility. Its first President and CEO Chet Simmons who came over to ESPN from NBC knew who exactly to hire and that was Jim Simpson.

Simpson worked many events and sports in the early days of ESPN including college baseball, basketball and football, the NBA, tennis and the USFL. His partners included Vitale, Drysdale, Paul Maguire and others.

And before he joined ESPN, he had established himself as the one of the veterans announcers for NBC on Major League Baseball games, college basketball, the AFL, NFL, Olympics, and tennis. And his partners there included Maury Wills, Kyle Rote, Bud Collins, Sandy Koufax, John Brodie, practically a Who’s Who of analysts in the 1960’s and 1970’s. He was at the mic for the Holy Roller game in 1978 between San Diego and Oakland.

He did the play-by-play on Super Bowl I for NBC Radio and that call will be featured this Friday on NFL Network.

Dick Vitale credited him for making him into a sportscaster rather than just being a former coach on TV.

It was an honor 4 me @espn to call games with JIM SIMPSON /he was the 1st big star @ ESPN May he RIP https://t.co/TPAMuDjNwY

His family also paid tribute to the legendary broadcaster:

Never could have hoped for or have had a more loving father. I'll miss you and love you.

Dad it was such an honor to be called your daughter. Love you forever

Following his ESPN years, Simpson called the Baltimore Orioles on WMAR-TV in 1998 and did various freelance assignments including the Olympics on NBC.

His former ESPN colleagues are providing their tributes to the man who meant so much to the early history of the network:

“On Jim’s first visit to Bristol I met him at the airport and immediately experienced his warm personality.  He brought tremendous credibility to ESPN in our early days, doing whatever was needed to help build the network.  Jim was a television legend.” – ESPN Founder and first President, Bill Rasmussen

“Jim Simpson saw the future of sports television was on cable, and his move to ESPN gave our company instant credibility and stature. His unsurpassed professionalism and smooth delivery graced our telecasts for many years. There has never been a finer or more unassuming man to reach such heights in his profession. Our thoughts and prayers are with his family and many friends and colleagues.” — John Wildhack, ESPN executive vice president, programming and production who joined ESPN in 1980 and worked frequently with Simpson

“Jim Simpson was a legend at NBC at brought a standard of excellence to ESPN that set the tone for so many to follow. I was honored he was assigned to work with me as I was just starting out. He had a tremendous influence on me and assisted me early in my career. He was special. Jim Simpson was as good as it gets.” – ESPN basketball analyst Dick Vitale who joined ESPN in 1979 and frequently partnered with Simpson

“Nearly 37 years ago, the broadcast industry was stunned with the news this tiny operation called ESPN had hired Jim Simpson of NBC Sports as its lead on-air personality.  Jim was already a titan in sports television – a veteran of numerous Olympics and World Series, and major sporting events.  His arrival provided ESPN with a critical injection of credibility.  If you’re not familiar with Jim’s body of work, Google it.  It is remarkable.  But what struck this 24 year old ‘colleague’ of Jim’s was the professionalism and class Jim brought to all his assignments.  It left an indelible impression, along with the more important fact that, personally, this network star was a prince of a man.  Jim Simpson passed away today at the age of 88.  Friday night, the NFL Network is presenting Super Bowl One – the lost game.  The sound track for that anticipated event is Jim Simpson’s radio call. From all of us here – especially those who worked with Jim, our thoughts and prayers to the extended Simpson family, and our thanks for our time with him.” – Bob Ley who joined ESPN in September 1979

“Jim was my mentor. And friend. A brother. Among the dozens of stories whose memories bring a wide smile to my face, here is one. In Italy covering a WCT tennis event in the early ESPN days our production hardware was challenging so the producer said, ‘Cliff you need to speak up, you are way too low.’  Jim leans over to me and says, ‘Don’t listen to them. You speak at your level. It’s their job to boost your voice.’ Jim always had my back. We covered multiple memorable matches, including the longest ever played at the time. A Davis Cup tie, McEnroe vs. Wilander. Over six-and-a-half hours.  In all the years we never had a cross word and I never once wished him to do other than what he did. Not once. It’s easy to casually throw the word love around. I loved Jim Simpson.” – ESPN tennis commentator and Hall of Famer Cliff Drysdale who joined ESPN in September 1979

In 1997, Simpson was given the Sports Emmy Sports Lifetime Achievement Award and in 2000, was inducted into the National Sportscasters and Sportswriters Hall of Fame.