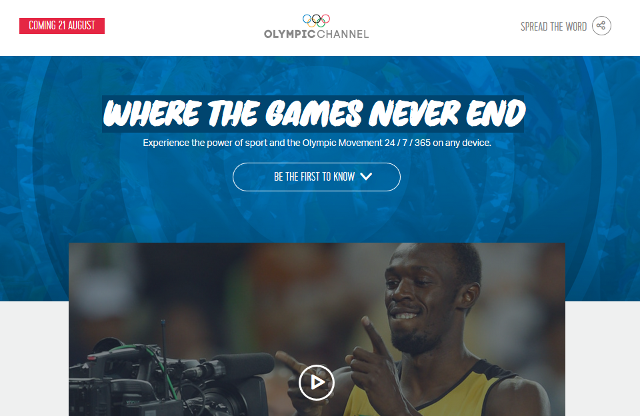 The IOC’s Olympic Channel is hoping it can use momentum from August’s Rio Games to get its free international digital product off to a good start, but it won’t actually be launching until right after these Olympics end. From the IOC’s release:

Starting Sunday 21 August, after the Closing Ceremony of the Olympic Games Rio 2016, the Olympic Channel platform will be available worldwide via a mobile app for Android and iOS devices and at olympicchannel.com.

With the goal of providing a new way to engage young people, fans and new audiences in the Olympic Movement, the Olympic Channel is a free platform that will present original programming, live sports events, news and highlights offering additional exposure for sports and athletes all year round. Olympic Channel original programming will include both short-form and long-form content, focusing on elite athletes, their quest for success and sport around the world.

Designed for a global audience, the Olympic Channel digital platform will showcase content from around the world, and will initially be offered in English. Additional features at launch will include fantastic content as video on demand, as well as individual sport pages within a user-friendly and mobile-responsive interface, subtitled in nine different languages.

It’s interesting that the IOC is opting to wait until the Games wrap up to kick off this new service. Yes, they probably couldn’t have displayed live event content during these Olympics without damaging their agreements with national broadcasters, but wouldn’t it have been possible to release some of this “short-form and long-form content,” such as profiles on different athletes or news reports on what’s happening with the Games during the period when the world is watching them? Perhaps they’re trying to leave the path clear for their media partners on those fronts as well, but it does seem to be a bit of a squandered opportunity to not have content of any sort up during the Olympics themselves.

The Olympic Channel itself sounds like a promising opportunity. It’s an idea that’s been bandied about for years, but one that has finally gotten off the ground, and there’s plenty of potential as something to promote and keep track of Olympic athletes and sports between the Games. Launching it as a free digital over-the-top channel with a global focus makes sense, too, and the release indicates there’s more to come:

After the launch of the global digital product in August, the Olympic Channel intends to foster partnerships with other Olympic stakeholders, including rights-holding broadcasters and National Olympic Committees to develop localised versions of the Olympic Channel. Localised versions will offer language-specific user experiences on digital platforms, and will also include linear television programming options.

The IOC and the Olympic Channel will have to hope there are plenty of people still eager for Olympic content after the Games wrap up, though.