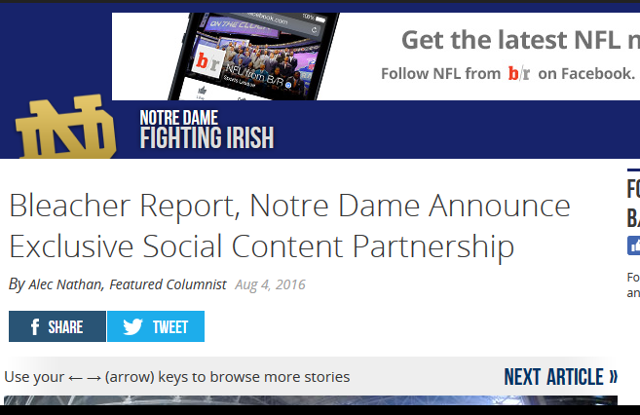 The role of business relationships in sports journalism coverage is continuing to expand, with the latest move on this front being Notre Dame’s announcement Thursday that they’ve signed an exclusive content-creation deal with Bleacher Report. Here are some of the highlights from Notre Dame’s release:

Bleacher Report, a preeminent next generation content creation company, has reached an agreement with University of Notre Dame football for an exclusive social content partnership throughout the season. The B/R social team will be embedded with the football program in South Bend and travel with the team to road games during the entire season to create custom content for the program’s national fan base.

The collaboration will consist of full behind-the- scenes access to the Notre Dame football team including practice, locker room, game day activities, home and away games, travel, academic classrooms and a wide array of student and campus life. The array of content will include a weekly video feature, Facebook Live streams, short shareable social packages and game day Snapchat takeovers, distributed across Bleacher Report’s website and Team Stream mobile app — reaching more than 250 million users — along with B/R social platforms with an audience of more than 200 million fans.

“Bleacher Report is thrilled to partner with Notre Dame for the 2016 football season,” said Dave Finocchio, CEO and founder of Bleacher Report. “We’re very proud of the work we’ve done in the Young Athletes space to date, and this partnership provides us with a next-level opportunity to showcase how millennial players and fans see the game. Notre Dame is an exceptional program filled with talented players and outstanding people. We can’t wait to work with them.”

Understandably, this has taken some blowback from journalists and from Notre Dame fans. Notre Dame appears to be granting Bleacher Report an extra level of access than non-paying media receive (an idea that earlier this week caused a ruckus and a recantation at another school with ND in its name, North Dakota State University), so there are questions about what this will mean for other media members, and there are questions about if Bleacher Report and its writers and video staffers (both those embedded with the team and those covering college football in general) will be able to cover Notre Dame fairly given this relationship. Here are some of those criticisms:

It's "internal media" vs. "external media" in PR parlance. Sanitized and pre-approved or independent and dogged. Fans ultimately decide.

It can be done well. Some team "beat writers" can be critical & MLB teams are pretty hands-off of https://t.co/GrNb2SHq8V, from what I hear.

But it's a slippery slope from independent journalism to pure PR mouthpiece. Readers, hopefully, know and appreciate the difference.

As a journalist, this concerns me. As a Notre Dame fan, this is also a concern: How will controversy be covered? https://t.co/tz5UDhLeQ8

It’s worth pointing out (as Lazerus, who’s the Blackhawks beat writer for the Chicago Sun-Times, notes) that this is far from the only case where teams are looking to drive their own coverage through their websites or their exclusive content relationships, though. This is happening in every sport, but the exclusive content relationships are rising in college football in particular, and Michigan’s partnership with The Players’ Tribune is a very similar example. As noted in that piece, though, these relationships aren’t inherently evil or completely new; in many ways, they’re new and much more interesting multimedia forms of press releases. “Press release” has a bad connotation, but all it really means here is that it’s stories being told from a particular angle, the player’s angle or the team’s angle.

In particular, many of the stories on The Players’ Tribune aren’t all that different from stories you’d find in newspapers, magazines or especially co-written or ghostwritten autobiographies. (By the way, speaking of ghostwriting, it seems highly unlikely that ND coach Brian Kelly actually said the “Bleacher Report is an industry leader in developing creative, high quality content with fans and we’re looking forward to sharing our unique story through its vibrant platform” line attributed to him in this release.) These stories have news value, and the main difference between them and independent journalism coverage is that the athletes have more control over the final product and more ability to perhaps monetize their own stories. But plenty of other outlets have proven willing to give athletes or other sports figures platforms to tell their particular side of a story unchallenged, too, from ESPN with everything from The Decision to the ESPYs opening to “Being Bret Bielema” to Sports Illustrated with everything from LeBron’s I’m Coming Home letter to Jason Collins’ announcement that he was gay.  These stories and comments from athletes and sports figures have value, and they have plenty of platforms competing to land them; of course they’re going to pick outlets more willing to let them do it their way. That particular angle is as old as journalism, too; players (and other sports figures) have always been more interested in speaking to certain reporters who they think are fairer to them.

It’s worth noting that the expansion of these “internal media” outlets hasn’t eliminated external questioning media. Yes, teams are putting more and more content on their own websites and competing for eyeballs that way, and yes, The Players’ Tribune (and Bleacher Report with this new deal) are getting some stories that might have come to others. That’s happened before too, though, with behind-the-scenes TV programs like HBO’s Hard Knocks and 24/7, Epix’s Road To The Winter Classic, Amazon’s All or Nothing and Showtime’s Inside (which covered Notre Dame last year in a manner that will probably be pretty similar to what Bleacher Report’s doing under this new deal, just on a different platform). None of those shows, and none of these internal media outlets, have been able to push out or devalue traditional media on a significant scale. Readers are still interested in objective on-the-scene coverage, often in addition to the inside looks, and that will likely be the case even after this new B/R move.

This deal should still be watched closely from a journalism standpoint with regard to two particular factors, though. One, will Bleacher Report still be able to deliver fair coverage about Notre Dame? That applies to both this “embedded” team and to the rest of their writers. If they appear to be ranking the Irish more highly or writing more glowing stories about them or avoiding controversy more than others, that has the potential to hurt B/R’s reputation. Two, and perhaps even more importantly, will independent journalists covering the Irish still be able to do their job? That’s what created the furor in the NDSU situation; extra privileges and early interviews for rightsholders is not new, and happens in every league with a TV deal, but the issue comes when you say that non-rightsholders can’t do one-on-one interviews or other things that are a key part of covering the team. If Bleacher Report still covers Notre Dame fairly inside and outside of this agreement, and if that doesn’t ruin coverage for others, this isn’t a journalism crisis. It deserves continued scrutiny to make sure that doesn’t happen, though.