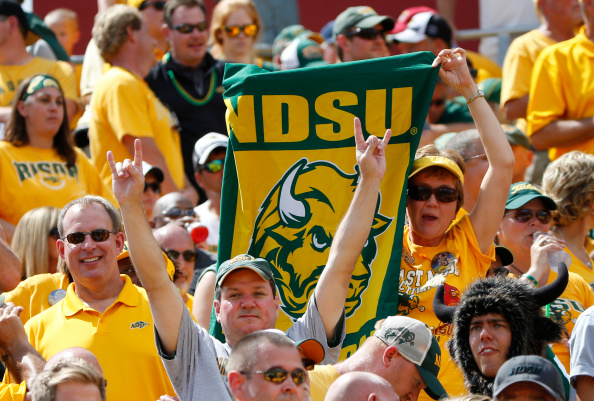 There’s a long-standing pattern in college sports of schools restricting access to local media, getting called out by national media for it, and then changing their tune. It happened with Louisville, South Carolina, Michigan and even Canada’s Queen’s University, and the latest to follow suit is five-time defending FCS champion North Dakota State. The Bison drew national attention and criticism this weekend for a media policy that prevented non-rightsholders from showing extended highlights, airing or streaming live press conferences, airing live radio shows from school facilities or grounds on game days, live-blogging or tweeting games, and most egregiously, conducting one-on-one interviews with coaches and players without school permission. Now, they’ve walked that back, as local TV station KFGO reports:

NDSU President Dean Bresciani has told the athletics department to rescind new media guidelines that placed restrictions on media that are not the exclusive rights-holders for broadcast and other media coverage.

“I was profoundly disappointed when I learned the facts about this issue. This is not the way NDSU treats local journalists and our many loyal fans who value the breadth of news coverage NDSU enjoys. As the state’s land grant university, our commitment is to access and inclusion in all endeavors.”

Athletic Director Matt Larsen has apologized for the impact on the institution. “I erred in not bringing these ideas forward for the president’s review, and I regret the damage this has caused to the administration, institution and university community,” Larsen said.

It’s good to see that the national pushback against NDSU’s restrictions (essentially an attempt to make local outlets pay to cover them) got results, but it’s notable that some restrictions along these lines on non-rightsholders have found traction elsewhere. Barring one-on-one interviews was particularly problematic, and likely a big part of what sparked the backlash here, but there are plenty of college and professional teams that have managed to restrict non-rightsholders along many of these lines (especially when it comes to televising portions of practice or game highlights, or early, exclusive interviews with broadcast media as compared to the rest of the media). North Dakota State went too far, and was appropriately smacked down as a result, but those who feel media access for those who don’t pay for rights is important should keep an eye on this in all arenas. There are likely to be many more fights along these lines in the coming years.