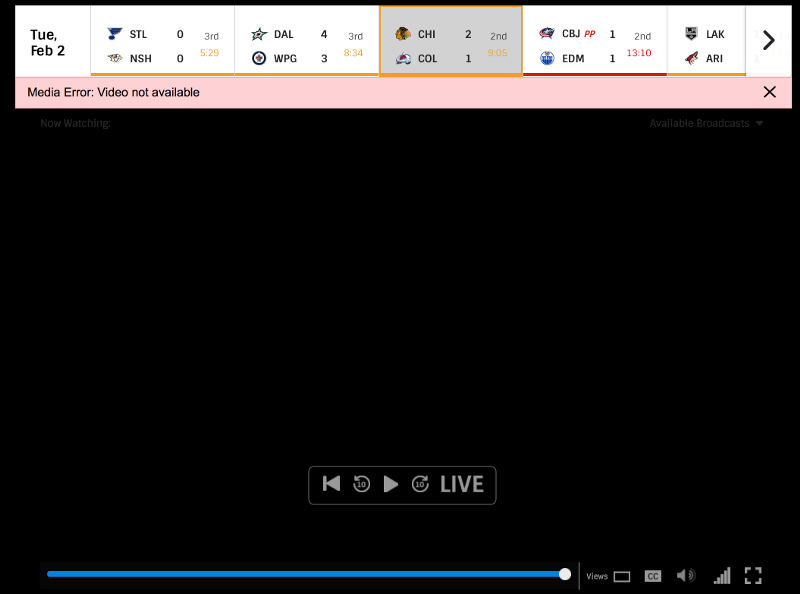 Remember when the NHL’s deal with Major League Baseball seemed like a great thing for hockey on the streaming front, given MLB Advanced Media’s long history of expertise and success on the streaming side? Well, the NHL and MLB Network integration has gone pretty well, but the transition of the NHL’s web properties to MLBAM has been much rockier. In particular, the switch from the old streaming service Gamecenter Live to the new NHL.tv went about as poorly as possible during the post-All Star-break games Tuesday night. Games crashed and looped regularly, and the service refused to load at all for many. Twitter filled up with complaints, as did Reddit, someone created a “Gamecenter_Dead” account, and even over 70 people e-mailed Yahoo’s Greg Wyshynski about the problems they ran into. Here’s one particularly poignant complaint sent to Wyshynski:

The NHL.tv app is a joke, and ruined me and my dog’s life. All I have to say is thank you to the pizza faced nerd in the basement of his mother’s house on Reddit to put out a better stream than the National Hockey League’s IT and engineering team. If I had the money for a hooker, you’d get the best mediocre hooker I could afford.

On the prior generation Apple TV.

Had to put in credentials again since they shifted over to NHL.TV.

Watched Flyers game, was ok for most of game. Then it started going back 30 seconds every so often, then hung at 2m to go in the game, and never returned. Couldn’t get back in.

Tried to watch Oilers game, never came up after 10 tries.

So I tried to watch the Flyers/Caps game from last week, crashed immediately.

I made it through login the first time, but then it got progressively worse.

Jason Gurwin has a fascinating breakdown of some of the various technical issues with the new service, including poor adaptive streaming, an unimproved frame rate on most devices and MLBAM’s decision to use Flash for streaming, but the problems went even further than that Tuesday. MLBAM president Bob Bowman told Wyshynski the biggest issue was one of the content delivery networks:

Primarily, said Bowman, it was a problem with one of BAM’s Content Delivery Networks (CDN).

When one game ends, it becomes archived. So the CDN needs to be configured so it knows that one game is no longer a live stream, and that another game is now being live streamed. According to Bowman, this “just wasn’t done right” on Tuesday night, leading to dozens of problems across the platforms: Streams slowing, freezing, lagging and crashing.

Much of this happened as the night went on and games reached their conclusions.

“We had a glitch last night. The game states changed, the config went down, and by the time you re-launch another CDN, it takes 20-30 minutes to re-launch that thing,” said Bowman.

This of course would lead to the question: Why not have a second CDN running in case the first one was glitchy on the night of the big launch?

“Should we have had CDNs spun up? The reason we didn’t spin up two is because if you have errors, it’s really hard to check on those errors when you have two of everything going, right? We tried to isolate it. It was a conscious decision,” said Bowman. “In hindsight, maybe we should have spun up two. But if we had to do it, we would have done it [that way] again.”

Bowman goes on to say the CDN issue should be fixed as of Wednesday, but a lot of fans may only believe the new NHL.tv works when they see it. Issues with a new service are understandable, especially when you’re launching it midseason instead of with a full offseason to prepare, but the level of issues that happened Tuesday night is remarkable, particularly for an expensive service. MLBAM has a solid reputation for streaming products in baseball, but they certainly didn’t make a good first impression on hockey fans this week. We’ll see if that gets better as time goes on.