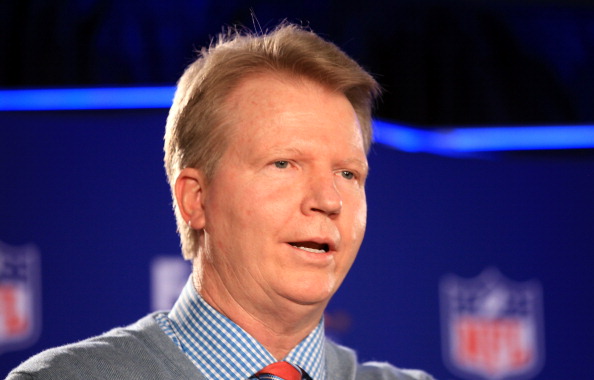 After Tom Brady threw his second interception of the AFC Championship on Sunday, Phil Simms commented as the camera slow-motion zoomed on Tom Brady, saying, “brace yourself, it’s gonna hurt.”

That felt like a warning to viewers as much as to Brady.

Since 2004, CBS has led its NFL in-game coverage with Jim Nantz and Phil Simms in the top booth, calling the Super Bowl whenever the network comes up in the NFL’s media partner rotation. This season, with Super Bowl 50’s shiny gold veneer being all over every channel all season long, fans have been bombarded with reminders for months, ever increasing as the playoffs rolled along, that the Big Game is on CBS, with Nantz and Simms calling the action.

Nantz is one of the finest announcers of his generation, and while he is a bit overprotective of the stars he covers, and CBS certainly over-exposes him to criticism by giving him the lead chair for almost everything the network shows—golf, NFL and NCAA basketball—there is no one at CBS, by design, who is better suited or more deserving of calling a Super Bowl.

Simms will also be there.

Look, it’s become sport to rip on announcers like Simms because the grass is always greener and each generation resents the one it’s replacing and Joe Buck hates your team and, wait…we’re getting off topic. Yes, Simms falls into that “it’s probably time to replace him” category, but not because the 61-year old former NFL quarterback is too old, and not because CBS has some hot young up-and-comer behind him who deserves a shot in the booth.

It’s none of that, sadly. It’s simply, fans deserve better than the flat, one-note, quarterback-centric commentary Simms can provide. I almost wrote the word ‘analysis’ there, but it’s really not. It’s commentary. Simms just…talks, often not even about the game going on in front of him, though he probably thinks he is, which should concern CBS more than it obviously does.

When Peyton Manning took a sack on the first drive after Brady’s second interception, Simms lauded Manning, explaining how he knows not to throw the football while under pressure without being able to see his receiver, suggesting that Brady took a risk on his interception that Manning wouldn’t take. In that immediate context, Simms may have been right, but he failed to mention Manning’s 17 interceptions on 331 regular-season passes this year to Brady’s seven interceptions on 624 passes.

To suggest Manning is safe with the football at this point in his career simply ignores the facts. To suggest the opposite about Brady shows a lack of attention to details, at best and a flat-out fabrication of the circumstance, at worst.

Simms is incapable of breaking from his narrative, either. When Brady rushed for a first down and Manning did the same a bit later in the first half, Simms wouldn’t let the “elusiveness” of both quarterbacks go, in lieu of actual in-game analysis. Granted, CBS did him no favors by putting a speedometer on both of their scampers, but on a second-quarter play where Manning is heard screaming “91 is hot,” Patriots linebacker Jamie Collins came screaming in on a third-down pass play to flush Manning and force him to throw the ball away.

Rather than break down the protection mistake that led to another punt for Denver—Manning was JUST yelling to his team which player was coming on the blitz and Ronnie Hillman went out on a pass pattern through the middle without so much as a chip block on Collins—Simms took the time to, again, talk about how fast Manning looked.

Perhaps CBS is just waiting for Manning to retire before shuffling its announcing crews. The odds-on favorite to hire Manning if he goes into television, CBS would surely be willing to put him in the lead booth right away, either relegating Simms to secondary status or moving him to the studio for a softer landing. If Manning wants to do studio work—less travel, more time to plan out thoughts and not have to react instantly which, ironically, often fells Simms during current telecasts—CBS will have to shuffle the studio crew, which could have a trickle down effect to the booth as well.

Gumbel has since been passed over again, now by Ian Eagle and Dan Fouts, who make up the second crew at CBS, calling a playoff game earlier this season.

Wouldn’t Fouts be better than Simms in the lead booth, calling the Super Bowl? Is there anyone who would disagree with that move? Hell, wouldn’t Trent Green, who now calls games with Gumbel? Or Rich Gannon, another CBS analyst, or Steve Beuerlein—how many old white quarterbacks do they have in the booth at CBS—or Solomon Wilcots?

While only Fouts has the cache to supplant Simms—remember, Fouts is in the Pro Football Hall of Fame and Simms isn’t­—it’s clear CBS has better options on its current roster. Tony Gonzalez, who is a studio analyst, would be great in the booth. Hell, Boomer Esiason, who could be the odd old-white-quarterback out if Manning retires to the studio and not the booth, is one of the best in-game analysts in the business calling games on radio. He would be a significant upgrade over Simms in the main television booth, if he’d be willing to do it with his other media commitments.