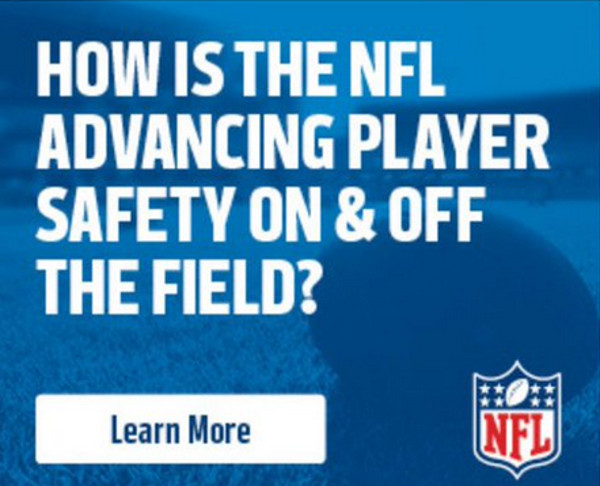 Update: The WSJ inquired about the not so subtle ad buy. If the ad buy was direct, you have to imagine there could be some repercussions for those responsible for the direct buy.

A spokesman for the NFL said the league bought the ads because it wanted to present information directly to readers, rather than have it filtered through the Times’ editorial staff. The league contends that it was transparent about the limitations of the data used in the research the Times cited.

“We wanted readers to have all the information about all the work that we’ve done to improve the safety of the game,” said NFL spokesman Brian McCarthy. “We were concerned that our message was being mishandled by the Times.”

Mr. McCarthy said this was the first time the NFL has purchased display ads to counter such a story. He said the NFL also paid to promote its message on Facebook and Twitter.

In an email, the New York Times spokeswoman declined to comment on whether the ads were sold directly by the Times’ ad sales staff to the league or through a third-party seller.

The NFL and The New York Times may be going to war over the paper’s reporting on the league’s handling of concussions, but the league still apparently finds it worthwhile to advertise with The Gray Lady, and to try and promote its player-safety policies there. That led to one of the funniest ad placements in recent times, as pointed out by FiveThirtyEight’s Neil Paine:

An ironic bit of advertising smack dab in the middle of the Times' NFL concussion story pic.twitter.com/ybQVT11spf

This particular placement was probably done by an algorithm rather than a human, and it may not have shown up in all editions of the story (some ads are user-targeted), but it shows some of the issues with algorithmic advertising on sensitive stories. If this story’s tagged with “football” or “NFL,” this ad (probably carrying the same tags) is a logical one for a computer to assign to it, whereas a human might have thought about it a bit more. This kind of advertising mishap does happen quite frequently, though, so it’s not just at the NYT.

However, what’s particularly funny is that Paine’s tweet was briefly retweeted by the Baltimore Ravens’ official Twitter account (@Ravens). They’ve since removed that retweet, but it happened. Add that to the numerous questionable PR and social media moves they’ve made over the years…