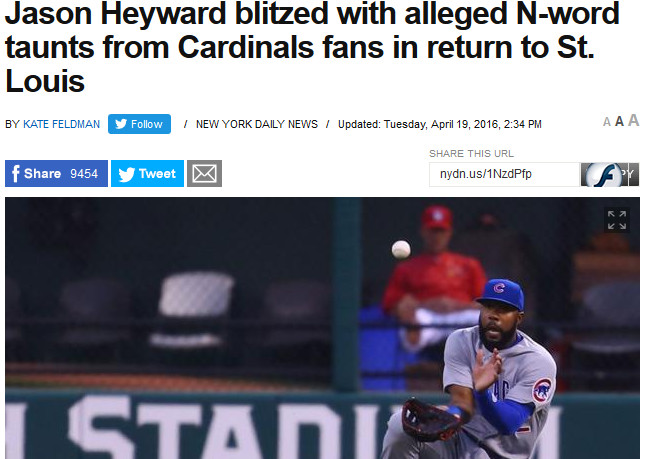 Tuesday was a rough day for The New York Daily News, which fired an editor accused of removing citations from Shaun King’s columns and also had to deal with severe criticisms of their “Jason Heyward blitzed with alleged N-word taunts from Cardinals fans in return to St. Louis” piece.

That piece cited four fans’ tweets, one of which only referred to “absolutely nasty things” and three which cited the N-word, but ESPN PR’s Ben Cafardo tweeted Tuesday that a review of their audio hadn’t turned up anything, and a further investigation from Deadspin looking at a range of audio feeds didn’t find anything either. Moreover, Heyward himself told The St. Louis Post-Dispatch he didn’t hear any specific racial taunts Monday, although he did say he has heard racial taunts in the past at unnamed ballparks.

Two of the tweets in the original NYDN article have since been deleted, too.

All in all, it seems like the NYDN injected themselves into this conversation much too quickly (and caused plenty of other outlets to pick it up as a result), and without an appropriate level of scrutiny for allegations of this nature.

N-word taunts against an athlete are absolutely something worth national media coverage, but there should probably be more proof that they happened before a major publication picks up the story. Three tweets, all apparently from Cubs fans, don’t seem like nearly enough to run with on a story of this kind, especially when you consider how many people were presumably watching the broadcast in question (and it’s interesting that the only tweet that specifically mentions ESPN is the vague one that doesn’t include a n-word reference, so those other ones could have been referencing the WGN broadcast, which is where the video clip the NYDN embedded of Heyward being booed came from). If there was a clear N-word, it’s surprising it wasn’t referenced by more people; more tweets, or tweets from reliable sources, which might have helped the credibility here.

Beyond that, it usually isn’t easy to pick up any specific comments on crowd microphones, so there should be some skepticism inherent to a story of this kind. It’s also noteworthy that the NYDN didn’t mention specifically in the game where this incident allegedly happened (which would suggest that their staffers couldn’t find it themselves) and that their story initially said “ESPN did not return a call or email for comment.”

Waiting for ESPN to respond before running with this might have saved them some egg on their face here.

In some ways, this situation may show some of the perils in attempting to be first rather than being right. If the NYDN had been patient and waited for other journalists (either in the stadium or watching on TV) to confirm or deny these charges, or waited to see if more substantive allegations or real video evidence popped up, they wouldn’t have tripped up here. Once they did, though, the floodgates opened, with many on social media citing their story (which did come from a high-profile reasonably-well-regarded journalistic outlet) as proof this actually happened.

Similarly to what we’ve seen with fake NBA stories and citing mock drafts as news, when a mainstream outlet makes a mistake of this sort, it’s often very quick to spread. The genie can’t be put back in the bottle, so people might want to be a little more careful before they take the cap off.