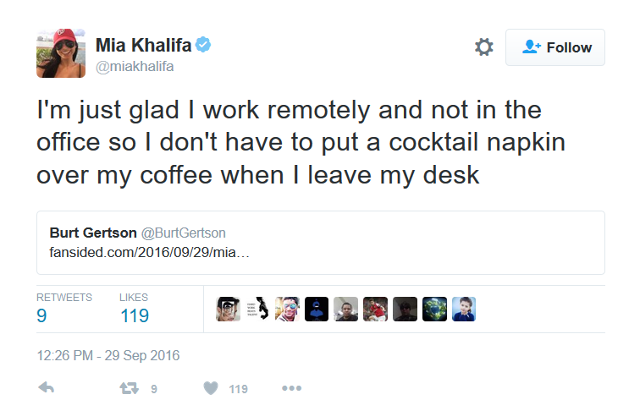 Neither the “Dirt Junction Bugle” nor the “Murder Creek Crier” return any Google results, and as you’ll see later, FanSided’s Editor-in-Chief has no record of their existence either. And there are no Google results for “Burt Gertson” other than ones related to FanSided. Awful Announcing has reached out to the Post to ascertain whether anyone named “Burt Gertson” ever worked there.

Update: This is the response we got from the Post’s sports desk: “No one at the Post Sports Department has ever heard of or worked with anyone named Burt Gertson. Appreciate you checking.”

Update II: FanSided has now confirmed Gertson does not exist,  his column is “fictional satire,” and the untruths their editor in chief expresses below are “having some fun” with AA:

There seems to be some confusion / anger over @BurtGertson's column. Burt's column has been running for weeks. It is fictional satire.

This week's column tackled the topic of @miakhalifa coming aboard as a contributor. We thought it would be funny to imagine Burt's reaction.

When @awfulannouncing asked us questions, we decided to have some fun with them.

It was honestly meant to be in good fun. If the humor didn't land, that's on us. But it was absolutely meant as humor.

And yes, Mia was in on the joke. From the start.

The point of Burt's column is to highlight generational chasms in the sportswriting world. That's where Burt comes in. He has a purpose.

We understand this was probably very confusing for a lot of people. But it was honestly meant to be theatrical commentary. Honestly.

Gertson has been turning out “columns” that read like Jay Mariotti parodies for over a month, and Thursday, he wrote a “column” about sharing a website with Khalifa. Here are some of the highlights, er, lowlights (language warning):

Let me make one thing moonshine clear: I’m a sexual animal just like anyone else. Love and lose like old Burt Gertson has, to where the antibiotics you’ve taken would end whatever life is left on Mars, you’re gonna see some twisted shit.

I don’t know Mia Khalifa from Rhea Perlman. Or at least I didn’t, before that snot-nosed diaper-filler Patrick Allen told me we’d hired a former “adult entertainer” as our newest full-time columnist.

“Like firing Ping Pong balls out of her crotch?” I asked him from a barely functioning Flying J payphone. “Standard-issue USO stuff?”

“Yeah, not quite,” he said. “You should Google Mia and find out for yourself.”

“I don’t google any broads before a two-bottle dinner and at least a few Polack jokes,” I said, flatly insulted. “Do you take me for some kind of animal?”

…I unfolded the computer to find the Googles web page already pulled up. Wanting to be as specific as possible, I typed in “Mia Khalifa highlights,” and hit the enter block.

Two button-pushes later, I was suddenly inundated with a feverish kaleidoscope of sex acts I’d only heard about in drunken passing, from Hindu store clerks eager to kill the wee-morning minutes.

Suffice it to say, company policies—not to mention a bonfire’s worth of Old Testament death threats—precludes me from detailing what I beheld.

Suffice it to say, It’s been going on a week since I felt the urge to pilfer dick pills from the Flying J counter while Frank’s bent over cleaning up the bag of Boston Baked Beans I spilled as a diversion. Such was Mia’s cinematic majesty, strange as the angles and arrangements seemed to me.

The “column” does go on to include “‘Holy hell,’ I bellowed at a bottom-shelf volume. ‘She can fucking write,'” so it’s not all negative, but it’s certainly an odd thing to see on a website about one of that website’s other writers. It’s certainly possible Khalifa’s in on the joke here, but this led to a Twitter fight between her and “Gertson” (further language warning):

I'm just glad I work remotely and not in the office so I don't have to put a cocktail napkin over my coffee when I leave my desk https://t.co/tmOaqzDvzg

He better not have "come off" anything or I'll forward this to HR. https://t.co/TSo2DVqdFn

Apology not accepted, don't lie down so easily, you geriatric fuck https://t.co/NeaY84fCn2

@miakhalifa @BurtGertson @FanSided you have to work with this guy???

@RPatrickAllen probably best for his cataracts

Awful Announcing reached out to Jim Cavan, who Time Inc. (which bought FanSided.com and the FanSided network in May 2015) appointed as FanSided.com editor-in-chief last month, by e-mail for comment on the situation. Here are our questions in bold and his responses in italics:

Awful Announcing: Is Gertson a real person? (I’m presuming not from the writer profile and the content.)

JC: Burt Gertson runs his own account and writes his own columns.

AA: What’s the goal behind having this “columnist” take shots like this at one of your other columnists?

JC: We obviously didn’t anticipated Burt’s column generating this level of fallout — either internally or in the Twittersphere. However, we’ve handled the matter internally, and both Burt and Mia are eager to move on.

AA: Is Khalifa in on the joke?

JC: Mia knew about the column before it went live. As I noted above, Mia and Burt have spoken and — hopefully — hashed out their differences.

AA: What would you say to anyone offended by Gertson’s content?

JC: Being a site dedicated to the fan’s perspective, FanSided prides itself on foregrounding a wide range of voices and perspectives. Obviously, Burt operates on what I would call the extreme fringes of what we’re willing to promote — and tolerate. Should he ever cross a line we feel is beyond the pale, he will no longer be writing for us.

AA: What’s the overall goal for Fansided with Gertson?

JC: Burt brings with him a wealth of sportswriting knowledge. To say nothing of his somewhat unfortunate life experiences. Our industry is changing — and has been changing — at warp speed. Lending a digital voice to someone who spent over five decades grinding for outlets like the Dirt Junction Bugle and the Murder Creek Crier casts into stark relief how profoundly the journalistic landscape has shifted.

AA: Are Gertson’s “columns” so far accomplishing what you wanted?

Given those responses, we asked some follow-up questions. Here’s how that went:

AA: Do you have any location or contact info for the “Murder Creek Crier” and the “Dirt Junction Bugle”? And is there a reason Google searches for them only return Gertson’s FanSided columns?

JC: Not really. I’d never heard of them myself. I’m assuming they went defunct decades ago.

AA. Can you give us more information on Gertson’s employment history, specifically when he worked for the New York Post as he claims? Are there other papers he’s worked for beyond the three his author bio specifically mentions?

JC: Burt’s application was written in pencil on a sheet from a legal pad. That’s not typically how we operate, but we felt his voice and experience were enough for us to look past that. Sadly, all of the references he provided were deceased. As for Burt’s time at the New York Post, that’s something he’d just as soon avoid talking about, based on our conversations.

AA. Is there a reason Google returns no information on Gertson other than his Fansided columns?

JC: No idea. We’re still trying to figure out all that algorithm stuff ourselves.

AA: Do you plan to update or delete Gertson’s column on Khalifa?

So to summarize this bizarre story:

1) Former adult film actress Mia Khalifa is now writing for FanSided.
2) Today she engaged in a Twitter War with a FanSided colleague who claims to have 54 years of sportswriting experience with no trace of his actual existence anywhere outside FanSided.
3) FanSided insists this is all legitimate and not some kind of weird attempt at parody.

And now, 4) FanSided admits this is parody and that they didn’t mean to offend.