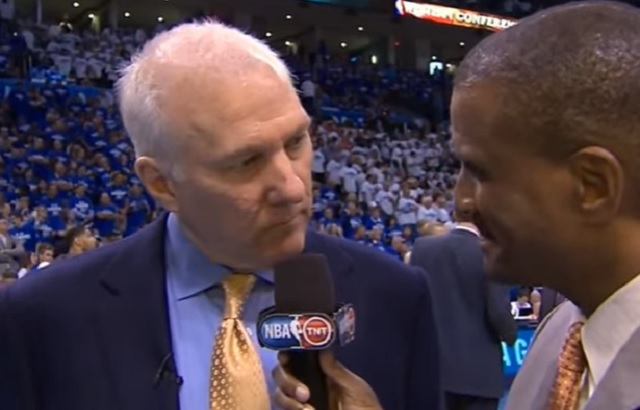 NBA coaches don’t like in-game interviews. Sideline reporters probably don’t much care for them, given the restrictions and emotions they have to deal with. And fans likely don’t get much from the conversations, other than some occasionally entertaining crankiness from the likes of San Antonio Spurs coach Gregg Popovich or the Los Angeles Clippers’ Doc Rivers, to name just a couple of the more contentious interview subjects.

Popovich’s exchanges with reporters such as TNT’s Craig Sager and David Aldridge, and ESPN’s Doris Burke have become the stuff of legend, memorably terse or tense exchanges that result when a coach might not be pleased with how a particular game is going for his team and doesn’t really want to answer questions about it at that moment, nor give away any sort of strategy that might be seen by opposing teams and coaches from the broadcast.

Even some of the more affable coaches in the league, such as Golden State’s Steve Kerr, get testy in the heat of a game when asked to answer a question that might require a little more thought or calm than the situation allows. Yet the in-game interview almost certainly isn’t going anywhere because NBA games are a television product for which networks pay huge amounts of money to broadcast. Thus, players and coaches need to provide more content and insight to the viewing audience, especially compared to watching games at the arena. Hockey has done them for years, and baseball has followed the trend.

The reporters are under pressure to ask good questions (two are allowed) as concisely as possible. But as Burke said in the NYT article, what happens from there isn’t something they can control. Sometimes, the results are so painful to watch that producers of the game telecast will opt not to put the interview on the air, if for no other reason than to avoid embarrassing the reporter.

But above all, sideline reporters have to gauge the moment and whether or not they think a coach will be interested in giving a decent answer.

“I do think you have to be smart enough about the circumstances to say, ‘I’m only going to ask one here,’” Lisa Salters told Cacciola, “if for no other reason than self-preservation.”

Media observers and fans may question just how much insight can be passed along in these short, intrusive interviews. However, as Salters points out, just being on the scene — especially near the huddle — can glean some important information for the viewer.

But in-game interviews can provide some entertainment value, which shouldn’t be underestimated when we’re talking about a television product. Whether Popovich and his coaching colleagues would surely balk at being asked to entertain, famously tense exchanges like the one above with Aldridge live on for all to enjoy, thanks to being saved on YouTube. They’re classic sports television.