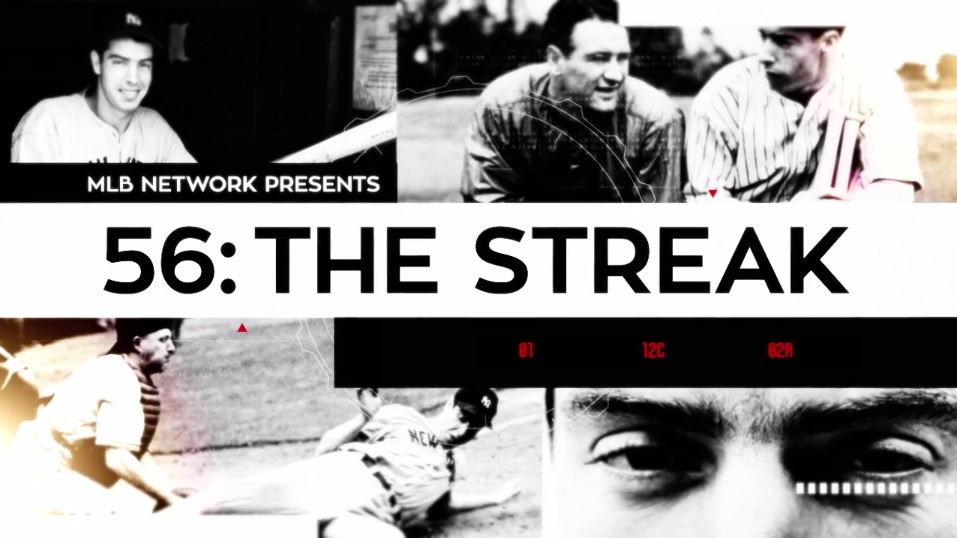 The latest installment in the MLB Network Presents documentary series is 56: The Streak, a rare in-season film, covering Joe DiMaggio’s record 56 game hitting streak. Why is the film airing in the middle of May rather than during the offseason? Well, Sunday is the 75th anniversary of the beginning of the streak.

Narrated by actor, New York native and lifelong baseball fan Ed Burns, the episode features interviews with the players who came closest to the record during their Major League careers, including Hall of Famer Paul Molitor (39), Jimmy Rollins (38) and Pete Rose (44), as well as Robin Ventura, who holds the NCAA hitting streak record at 58 games. Each discusses the challenges in trying to reach such a record, from the attention that continued to build with each game and the circumstances that fell out of their control, as well as their awe of the accomplishment. “Ballplayers that get to this level really strive for consistency and I don’t know if anything speaks to consistency more than a 56-game hitting streak,” said Molitor. Rose, the player who’s come the closest to the streak since 1941 said, “I never looked at the hitting streak as any pressure because only one guy did it more than me and that’s Joe DiMaggio. So, what’s there to pressure? There’s only one Joe DiMaggio.”

56: The Streak takes a deep look at how advances in today’s game – including pitching specialization and the use of defensive shifts – have changed the landscape of the Major Leagues since 1941. The episode also focuses on the rarity of the streak from an analytical standpoint. Using DiMaggio’s batting average and number of plate appearances during the streak, mathematics professor Father Gabe Costa of the United States Military Academy at West Point compares DiMaggio’s probability of getting a hit in each game to that of some of the best hitters in today’s game, including Jose Altuve, Bryce Harper and Giancarlo Stanton.

The film makes liberal use of archival footage from DiMaggio’s career on the field, as well as an interview with DiMaggio’s from the archives. Among the other personalities interviewed for the film are Ken Burns, Bob Costas, Peter Gammons, Ray Robinson, Jimmy Rollins, Pete Rose, and Mike Vaccaro.

The best part of this film is pretty clearly the old footage, include some rare color clips of DiMaggio on and off the field. I’m not sure how much of this footage has been released before, but it’s still pretty great to see these old clips of DiMaggio in action.

The film isn’t flawless, though. DiMaggio’s performance during the streak is romanticized, as many baseball records are, and there is no focus on DiMaggio’s life off the field during the streak. I would’ve liked to hear from DiMaggio or his teammates about how he was handling the stress and pressure, but since nearly all of those interviews came from the archives, it’s not as if a new interview can be arranged to add some more context.

I also thought the focus of which, if any, current players could break DiMaggio’s streak was strange. The three players discussed were Jose Altuve, Bryce Harper, and Giancarlo Stanton, the latter two of which are power hitter that could get intentionally walked quite a bit. Of course, that wasn’t mentioned at all during the analysis, and the focus was solely on their ability to collect hits.

At the end of the film, there was a pretty strong condemnation of any player getting to 56 by bringing up the dominance of current bullpens, the prevalence of defensive shifting, and the overwhelming 24/7 media landscape, three things DiMaggio didn’t really have to deal with all that often. DiMaggio’s streak happened in a different time, and because one bad day can completely sabotage it, it’s unlikely that someone is ever going to get to 56 again.

Regardless, the film is still enjoyable despite some of these flaws. It doesn’t really tell us anything new about the streak, but it’s still a strong look at it all of these years later.