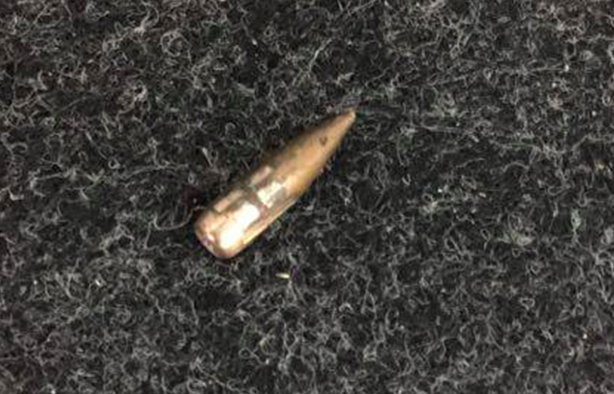 In what is by far the weirdest story to come out of Day One of the 2016 Olympics, a military bullet fell from the sky and pierced the ceiling of the equestrian press tent Saturday afternoon.

BREAKING: security staff at the media centre in the Rio equestrian venue investigating reports of a bullet that came through roof @NewshubNZ

Small tear in the roof where suspected bullet came through ..NZ team staff were inside at the time @NewshubNZ pic.twitter.com/ErSm9fJKhr

No one was harmed by the mysterious bullet, but still… what? Bullets raining from the sky is not really how you hope to start the Olympics.

According to Horse & Hound, the bullet was identified as a 5.56mm assault rifle round. Here’s H&H’s account:

It landed at lunch time, a particularly busy time in the press office as journalists from all nations were busy writing up their stories from the morning’s eventing dressage.

All three of H&H’s team in Rio were in the room at the time. The bullet landed nearest to British photographer Jon Stroud — who is here working for Team GBR. He ran to the far end of the room to seek help.

Team GBR’s Pippa Wade was sitting next to Jon when the bullet landed. The British Equestrian Federation’s Dan Hughes was also in the press room, talking to commentators Ian Stark and Mike Tucker.

The bullet, which was bronze in colour, landed on the carpet and did not pierce it. The photo manager at the venue quickly retrieved the bullet, but not before photographer Pierre Costabadie could photograph it.

Via H&H, here’s the bullet:

H&H speculated that the bullet had come from the military base next door. And according to Newshub’s Melissa Davies, police determined the bullet was fired unintentionally.

EQUESTRIAN VENUE UPDATE: assessment from NZ police is a bullet was fired unintentionally at the media centre @NewshubNZ

What a weird story. Maybe the equestrian press should wear hard hats from now on.