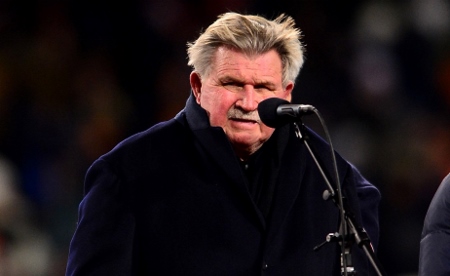 While Mike Ditka is off ESPN NFL Countdown in favor of Matt Hasselbeck, he’ll be sticking around with the Worldwide Leader. ESPN announced Wednesday afternoon that Ditka has signed a two-year extension to be “a contributor to SportsCenter,” and will “contribute to the network’s flagship news and information show on a year-round basis beginning in September.” According to ESPN’s release, the move was at Ditka’s request:

“This new role is really a blessing,” Ditka said. “It’s something I asked for. After many years of weekend travel, I’m thrilled I’ll get to watch NFL games on Sundays and Monday nights in the comfort of my own home. I enjoy being part of the game and part of ESPN. I really do. So this is a great solution.”

Added Seth Markman, ESPN’s senior coordinating producer, NFL studio shows: “Mike talked with me late in the year about his role for next season. Thankfully we were able to come to an agreement that works for him and keeps him a part of our ESPN family. This announcement is great news for us and for our viewers, as Coach Ditka continues to be someone NFL fans everywhere respect and admire.”

The Big Lead’s Jason McIntyre was first to break the news of Ditka leaving Countdown Tuesday evening, and wrote at that time that “Ditka is not leaving ESPN – he’s just departing Countdown. Sources say he’ll have an unspecified emeritus-type NFL role at the network.” It looks like this is that new role. It’s interesting that they announce a “year-round role” starting in September, though. We’ll see if the 76-year-old Ditka gets substantial time on SportsCenter in this new role, or if he quietly fades away a la Bobby Knight. We’ll also see if he continues to receive an apparent exception from Bristol’s “no politics” policy, or if that also got sent to his spam folder.