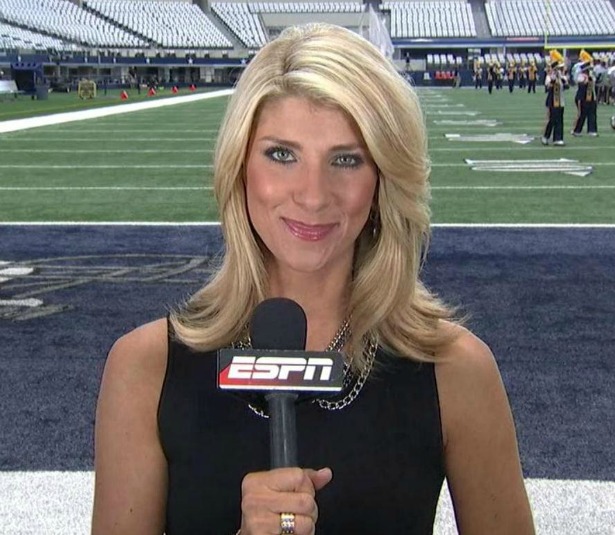 ESPN has made substantial changes to its NFL coverage this offseason, parting ways with the likes of Tom Jackson, Ray Lewis and Cris Carter, while shifting Keyshawn Johnson to a Los Angeles-based radio/weekly studio shows role and bringing in Randy Moss, Matt Hasselbeck and Charles Woodson.

The latest one will further make over their Monday Night Countdown pre-game show, with Michelle Beisner-Buck telling Ryan Glasspiegel of The Big Lead she’s coming in to do features in Rick Reilly’s old spot (with ESPN also confirming Reilly is no longer with the network). Here’s what she said:

Beisner-Buck did features for Sunday NFL Countdown for the past two seasons, and she explained why she is excited to be changing programs. “It’s the only gig in town,” she says. “You’ve got a captive audience. On Monday night if you’re a fan of the NFL, you’ll be watching us. Rick is very talented, and he’ll be missed. I’m honored that [ESPN NFL senior coordinating producer] Seth Markman is giving me the opportunity to fill those big shoes.”

Beisner-Buck notes that she’ll be doing a variety of stories for the program. “Anything is fair game,” she says. “There isn’t any idea that we won’t consider. I think we’ll have a good combination of lighter, smile stories, and then we’ll have some of those grab a Kleenex and have a good cry kind of features. I am completely fearless, and I will try anything. If there’s a feature one week where an equipment guy has a passion for skydiving and he wants me to go with him, I’ll do it. I’m excited to show my range.”

As Beisner-Buck mentions, this seems like a step up; while Sunday NFL Countdown is prestigious and also pulls in big ratings, Monday Night Football is one of ESPN’s signature broadcasts and doesn’t have the competition from other NFL-airing channels’ pre-game shows that Sunday’s show does. Monday Night Countdown is highly important to the network, and they often put their top analysts on that broadcast.

It will be interesting to see what Beisner-Buck does with the Monday features role, as Reilly’s features were often hit-and-miss in terms of their reception. She certainly has a solid level of experience with the NFL; before joining ESPN in 2014, to do those Sunday NFL Countdown features, she spent eight years as a studio host and field reporter for NFL Network. She’s also done some prominent features, including one on Devon Still and his daughter’s battle with cancer. We’ll see what she does in this new slot.

This also marks quite a quiet exit for Reilly, once such a high-profile and highly-promoted hire. At least ESPN won’t have to worry about defending his tweets or giving him on-air credit for “scoops” any more?