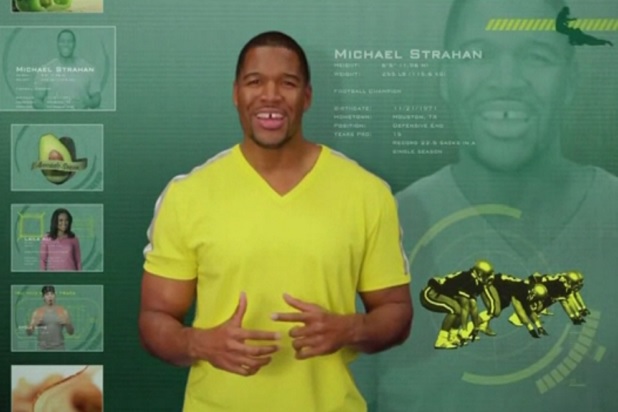 It looks like Michael Strahan’s move to a full-time role on Good Morning America will carry some drawbacks for him. In addition to his work on Fox NFL Sunday and Live! With Kelly And Michael, Strahan has long been a pitchman for companies ranging from Subway to Snickers, and while that hasn’t posed many problems with his previous contracts, it’s apparently against the policies of ABC News (which oversees GMA). The New York Post’s Ian Mohr writes that as part of his new job, Strahan will have to give up his endorsement deals:

Don’t expect to see Michael Strahan’s handsome face on any more commercials. As part of his deal to join “Good Morning America” full-time, Strahan — who’s hawked brands from Pizza Hut to Metamucil — will have to drop his endorsement deals, Page Six has learned.

The move to dump his advertising efforts is being made because, when Strahan jumped from ABC’s “Live With Kelly and Michael” to “GMA,” he effectively became an employee under the ABC News division, which forbids staffers from endorsements. On his former Disney/ABC Domestic Television show with Kelly Ripa, Strahan wasn’t subject to the same rules. (Ripa does ads for brands including Colgate toothpaste and Electrolux appliances.)

The hunky former Giants player has been a one-man branding machine, previously starring in commercials for products from Subway, Pizza Hut, Metamucil, Snickers, Dr. Pepper and Right Guard, among others.

But an ABC rep said Strahan’s endorsement deals will end “in the next few months” and will not be renewed.

It’s interesting to see this, as the debate about on-air personalities and endorsements has long been a thing, but it’s particularly curious to see it with Strahan and GMA. First off, GMA isn’t exactly the hardest-hitting journalism out there, so it wouldn’t seem all that incongruous for its personalities to be pitching products,  and second and perhaps even more importantly, Strahan was already a regular contributor to GMA. So it was okay for him to be selling subs and pizza while he was on GMA twice a week, but they suddenly have to cut those ties now that he’ll be a full-time GMA staffer? Endorsements by on-air people really don’t seem that problematic if they’re disclosed (a big issue with some of ESPN’s endorsements years ago was there wasn’t much transparency and disclosure, but that’s changed now), and they’re especially not problematic if they’re unlikely to affect reporting and journalism.

Strahan is many things, but he’s not really a reporter or a journalist, and while he may be doing more interviews in his new role, it seems unlikely they’d touch on areas where he has endorsements. (Also, if that did happen, it would seemingly be easy enough for GMA and its deep cast to just assign those stories to others.) The rule against endorsements here seems a bit overreaching, and it also seems a little odd to see GMA have the same rules as more journalism-focused parts of ABC. But hey, that’s their rule, and it looks like Strahan’s agreed to it. The end outcome for viewers is that they’ll get more Strahan on GMA and less of him pitching products, and some might be quite happy with that.