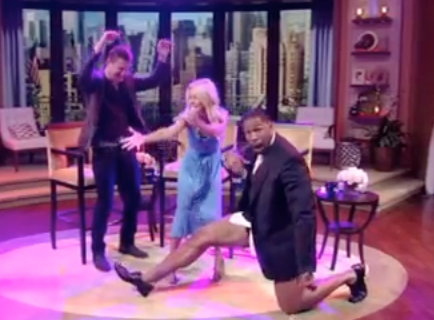 Michael Strahan has decided to leave some media jobs for other people. Strahan’s current three-show workload (Live With Kelly And Michael daily, two appearances as a special correspondent weekly on Good Morning America, and weekly Fox NFL Sunday work) is going to be reduced to two shows this fall, as he’ll be leaving Live! with Kelly and Michael over the summer and joining Good Morning America full-time in September. Here’s what Strahan told Marisa Guthrie of The Hollywood Reporter in a statement:

“I look forward to continuing to work with the incredible team at GMA. It is an exciting opportunity to be able to bring unique stories and voices to the audience,” said Strahan in a statement to The Hollywood Reporter.

He added, “My time with Live with Kelly and Michael has been transformative, and my departure will be bittersweet. Kelly has been an unbelievable partner, and I am so thankful to her and the entire team. I am extremely grateful for the amazing support I’ve received from all of the fans.”

Both shows are ABC assets (GMA is broadcast nationally on ABC stations, while Live! originates from New York’s WABC and is syndicated across the country), so this is a move within the company for Strahan. It’s one that could have big implications for ABC, though, especially perhaps as a way to regain dominance in the 25-54 demographic, where GMA now trails NBC’s Today (GMA still leads in overall viewers, though). Here’s part of what ABC News president James Goldston said about him in a memo announcing the move to staff:

The deeply talented Michael Strahan, who currently joins Robin, George, Lara, Amy and Ginger twice a week, will expand his role to appear full-time in the mornings on GMA starting in September.

Michael has been a stellar addition to the broadcast. Over the past two years on GMA, he’s proven to be a tireless and versatile broadcaster with an incredible ability to connect with people, from veterans to American pop culture icons and newsmakers.

He will end a four year run as Kelly Ripa’s co-host on Live!, where he has honed his skills as an interviewer with genuine warmth and a quick wit. At GMA he’ll now have even more opportunities to tell stories that inspire, inform and empower people.

…I’m delighted to welcome Michael to GMA each and every morning. I can’t wait to see what this incredibly talented team will bring our viewers next.

This is an interesting move for Strahan, as it brings him to a more-regular role on an even higher-profile show, but puts him amidst a larger cast than just co-hosting with Ripa. Juggling two jobs instead of three should be easier for him, too, but he’ll still have the weekend commute from New York to Los Angeles and back during football season, so Strahan’s still going to be working hard, and will still be on TV six days a week. It will be worth watching who’s tapped to succeed him on Live! as well; that show was renewed through 2020 earlier this year, so it’s not going anywhere. Strahan found plenty of success in that role, too, so it’s not out of the question that someone else from the sports world might follow him.