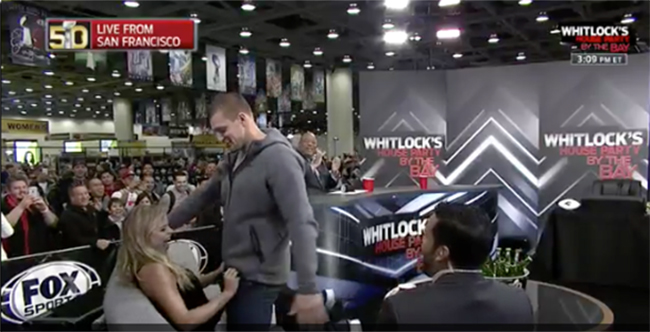 It’s Super Bowl week, which means that thousands of media have descended on the Bay Area to cover the Big Game for a myriad of outlets, all fighting for that one story or moment or bit of commentary that will make everyone stop and click.

Surely there’s some of that going on at FS1 too, as the network has some immensely talented contributors, both on the air and in print. Fox has a lot of really, really good people working there, which is why it’s a shame that the only damn reason anyone is talking about them this week is because Colin Cowherd said something insanely asinine about John Wall (again) and Julie Stewart-Binks dared Rob Gronkowski to give her a lap dance, and the big oaf did it.

This moment of Fox levity came on Jason Whitlock’s Antique Sportswriter Roadshow, a daily cavalcade of Clay Travis insults and whatever Whitlock is doing the rest of the time most people aren’t watching FS1 long enough to find out.

The shrill voice you hear in that clip, by the way, is Jason McIntyre of The Big Lead, egging on Gronkowski like a DJ at a junior prom, the Salacious Crumb to Whitlock’s week-long Jabba party.

The moment was fantastic for Fox, and everyone is talking about it, which is exactly what the higher ups want. The Super Bowl run-up, after all, is about largesse and excess, and there’s no one better at both than Fox.

So maybe that’s the model going forward for Jamie Horowitz and his debate-embracing lot. It’s Pavlovian, sure, but if the only time anyone pays any attention to FS1 is when an NFL player is giving a reporter a lapdance, or Cowherd is ringing the “I’m not a moralist, I’m a realist” bell or Clay Travis is doing whatever Clay Travis does to get people who care about Clay Travis enough to let Clay Travis rile them up to rile people up, then that’s what Fox should maybe keep doing.

If it works, it works, and Fox won the day with that one move. (Note: series of moves.) Stewart-Binks will have more people talking about her today than the entire summer she spent flying around North America covering soccer for Fox—and doing a damn fine job in the process. Most of the outlets writing about it didn’t even have the courtesy to use her name, probably because a lot of them have no clue who even works at FS1 in the first place.

None of that matters when you can get Gronk to grind.

The problem isn’t Fox getting the most attention at the “hey look at me” convention. The problem will be on Monday, or hell even later today, when people are looking for actual sports coverage and not the circus act FS1 has become. And really, this silly dance is fine. Well, it’s actually quite ridiculous, and I’m slightly embarrassed both for and by everyone involved, but this is exactly what we’ve grown to think Fox is all about, because this is exactly what Fox is all about!

This is true: the only clips outside of this lapdance that have made any rounds on Twitter from FS1 this week have been Katie Nolan drinking beer with Gronk earlier in the day.

Oh, and Katie Nolan drinking beers with Matty Ice earlier in the week.

Come chat with @katienolan, get a mid-day beer!

Not a bad trade off, Just ask @M_Ryan02. #MattyIce pic.twitter.com/3oqAlHtV3j

And that thing they did where Katie Nolan interviewed Chris Berman and a bunch of other media types at Super Bowl Opening Night.

And that’s it. Nobody is paying any attention otherwise. Fox Sports Live is being rebooted into something different, because the show cannot compete with either the internet or SportsCenter when it comes to highlights, and because Fox has seemingly no idea how to get anyone to pay attention to their cable sports network’s original programming besides whatever Gronk was doing to JSB.

Again, this is fun, and funny and harmless, but if it was Cam Newton (or any prominent black athlete, let’s be honest) the world would be ending right now.

It this happened on ESPN—if a female reporter on ESPN dared Gronk to grind on her—people up and down the internet would be waiting in line to destroy both her and the Worldwide Leader for their unprofessional nature and low-brow content and everything we care about when ESPN does something, but barely even notice if it happens anywhere else. Especially Fox.

If there’s one brand in sports media we would expect this from, it’s Fox, so those involved were merely playing their part. And yet, when that’s all Fox seems to have, and when no one on the planet has any idea what else happened on the Whitlock happy funtime party boat extravaganza before or after this one moment, that’s a problem for Fox.

Unless it’s all lapdances from here on out. At least then people might watch.