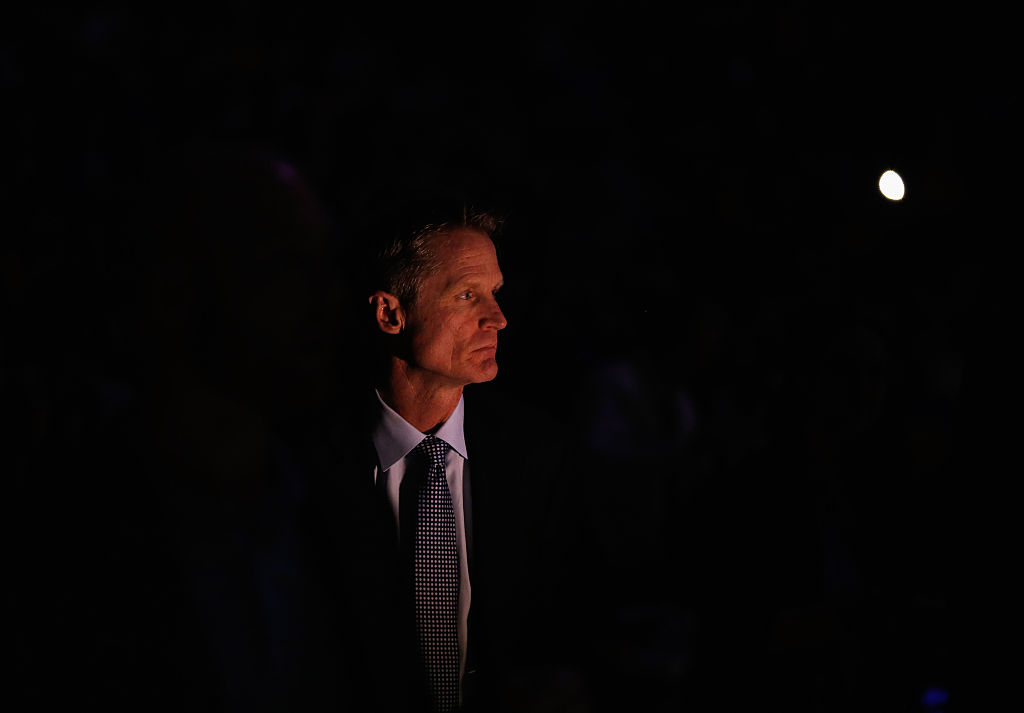 For someone who hadn’t coached above the AAU level before taking his current position with the Golden State Warriors, Steve Kerr seems to be pretty good at coaching basketball.

The recently minted 2015-2016 NBA Coach of the Year is currently chasing his second championship in as many years of coaching, coming off a 73-win regular season that broke the league record. Kerr not only transitioned from his broadcasting role— as an analyst for TNT, into coaching— seamlessly, he’s done so with an unprecedented level of success for any coach, more so someone in his first NBA job.

In exclusive conversations with Awful Announcing, several of Kerr’s former Turner Sports partners and colleagues explained why he’s flourished, and how so many of his life experiences and character traits help him excel in the Bay Area.

“I always felt he would be successful,” Marv Albert told Awful Announcing  “but to think he would be in the situation he’s in right now is incredible.”

After a collegiate career at the University of Arizona under hall of fame coach Lute Olson, Kerr played 15 seasons in the NBA, with nine of his final 10 years coming under Phil Jackson in Chicago and Gregg Popovich in San Antonio. He won five championships with those two franchises.

“During that time he was like a sponge, soaking in and taking in the best of each of the great coaches he had played for throughout his career,” Turner analyst Mike Fratello told Awful Announcing. “And I think Steve had in the back of his mind that some point, he would like to try that.”

Upon retiring from playing, Kerr went straight from the NBA to Turner, where he was an analyst from 2003 to 2007 and 2010 to 2014, with a four-year run in between as the general manager for the Phoenix Suns.

“When we would travel on the road, we’d always get together with coaches before the games,” Albert said, “but he would spend a little extra time. He always had his eye on that.”

While at Turner, Kerr coached his son Nick’s AAU team in his home town of San Diego, according to Scooter Vertino, the senior vice president of Turner sports and the general manager of NBA Digital. And during those pre-game meetings TNT has, coaches give broadcasters a wealth of information and knowledge for the night’s telecast.

“Steve would ask all the right questions in those meetings and he would also go back and say ‘hey, I saw that out-of-bounds play you used three nights ago, what did you do there? What were you thinking there’,” Vertino told Awful Announcing. “And then he would adapt that play and use it on his AAU team.”

When Albert and Kerr called NCAA Tournament games together for Turner and CBS, Kerr didn’t just observe the players to prepare for his broadcasts.

“There would be some players— and the way Golden State is built, you have a lot of complimentary guys to their stars— which came after Steve came in, that I knew he liked because of things that he said about them concerning their team concept,” Albert said. “It was interesting to see what his judgments would be on certain guys.”

In passing, Kerr and Fratello used to talk about different coaching decisions or strategies in a very detailed fashion.

“When he would make a statement that sounded like a coaching statement or opinion,” Fratello said, “I would just tease him and say ‘wait ‘til you’re coaching, we’ll see how quick you are with those kinds of decisions.’”

So Kerr was thinking about coaching to some extent for a while, but far more than just x’s and o’s goes into coaching in the modern NBA. And Kerr seems to have many different character traits and qualities that’s helped him achieve so much in such a short amount of time as a coach.

“He always was a guy that could seemingly fit into different groups and meetings with different personalities,” Vertino said.

While Kerr was an executive in Phoenix, Grant Hill, now a broadcaster with Turner and CBS, was a player with the Suns.

“I don’t know if there was a better people person, who could manage people and make people feel good about themselves,” Hill told Awful Announcing. “He knew when to say the right thing. Whether addressing the entire team, pulling a couple of players aside, walking past each other in the hallway, calling you to go grab a coffee, he had real good instincts in being able to understand and read people.”

And that ability to communicate and manage different egos and personalities is something Kerr seems to thrive at, which is not something all coaches (even successful ones) can do.

“When you see him deal with people or take on new challenges, it’s not surprising to any of us here that he would be successful,” Vertino said. “He has a way about him that is, I think, disarming when you deal with him. He’s very easy to talk to and to open up with. And I would think his players see that.”

Hill vividly remembers Phoenix’s pre-game locker room before Game 3 of the 2010 Western Conference Finals. The Suns lost the first two games against the Lakers, and Kerr gave the team this passionate speech that rallied the team together.

“It was just an unbelievable speech, and got us fired up,” Hill said. “That’s an example of him knowing what to say and having a good read and a pulse of a team.”

Phoenix won the next two games and Hill remembers thinking that maybe Kerr could actually have a future in coaching.

“He’s responsible for creating that kind of environment,” Hill said about how Kerr gets the most out of his Warriors players.

“He’s just the right guy for that particular group,” Albert said. “He’s broader than just basketball, and I think that’s what makes him so good with the players. We would discuss politics, we would discuss movies, shows.”

Albert said that during his days with the Bulls, Kerr and his wife Margot would frequent Chicago’s famous Second City comedy theatre, whose alumni in the ‘90s included Stephen Colbert, Tina Fey and Adam McKay.

“He was like on a first-name basis with everybody,” Albert said. “Steve has a twisted sense of humor.”

“Once Steve discovered there was a talk-back button and he could bust our chops in the truck from time to time, he was certainly a kid in the candy store,” Vertino said.

But Kerr’s main comedic foil would always be Albert himself. This reporter’s first Kerr-Albert experience came in a narrow hallway a few years back at Madison Square Garden, while the media waited to enter the visitor’s locker room before a Thursday night TNT game. Suddenly, there it was: the most perfect, authentic, spot-on impression of Albert coming out of Steve Kerr’s mouth.

“That’s just part of his all-around personality, how skillful he is in theatrics,” Albert said.

“Oftentimes when Steve calls and leaves me a voicemail, it is in his Marv voice,” Vertino said. “When it’s not, I think something’s wrong.”

Even though Kerr has moved on from TNT, Albert is still the target. Literally.

“He’s got Marv’s face on the dartboard in his office,” Fratello said. “It’s perforated with a number of holes that he’s practiced and worked at his dart game on Marv’s face. Little things like that that he thinks of.”

That improvisation and relatable humor serves him well with Golden State— Albert said he thinks Kerr rehearses his ad-libs before doing press conferences with the media— and something he’s honed his entire life leading up to his current role.

Kerr’s experience during his playing days under Olson, Jackson and Popovich and his time as a general manager, broadcaster and worldly comedic renaissance man has all helped him leading up to his unbelievable current run with the Warriors. Thanks to all these experiences, Kerr hasn’t done half bad at his first run at coaching.