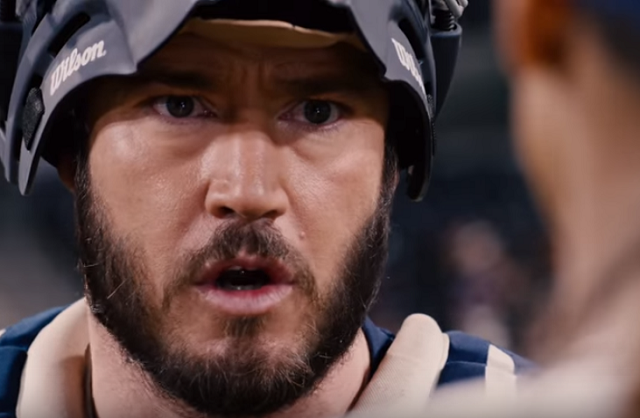 Pitch, a new drama set to premiere on Sept. 22 on FOX, tells the story of Ginny Baker, the first woman to play in Major League Baseball. Baker’s reluctant mentor as she makes history for the San Diego Padres (yes, the real Padres because the show is being produced with full support of MLB), is grizzled veteran catcher Mike Lawson, played by Mark-Paul Gosselaar.

We caught up with the former star of Saved By the Bell and Franklin & Bash to talk with him about Pitch at a media event in San Diego, timed to coincide with Tuesday’s MLB All-Star Game at Petco Park. Gosselaar, who grew a beard for the role (think the Padres’ Derek Norris), has come a long way from his days as the main dude at Bayside High.

Now 42 years old and a father of four, Gosselaar talked about getting into character for Pitch, whether we’ll see a female MLB player, being hit by 90 mph fastballs and the infamous “ass-slapping” incident with co-star Kylie Bunbury during his audition.

On what drew him to Pitch:
It was the writing. You read a script and read multiple scripts a day, and this one really stood out. When you put it down, you want to see where the characters go. Every single one of these characters, you want to see more of. The story is empowering and it’s such a great message. With two daughters and two sons, it’s a message that needs to be heard at the moment. It really came down to this was the best script I had read in years.

On growing up a sports fan in Los Angeles:
I’m a soft baseball fan. I grew up my entire life in Los Angeles so we kind of like — we’re fair weather fans. If the Angels make the playoffs, I’m an Angels fan. When the Dodgers play the Giants, I’m a Dodgers fan.

On MLB support for the show:
The condition for MLB to come on board was that we remain absolutely authentic to the game and to the players and to the stadiums, and that appeals to real baseball fans. I always get taken out of shows that are about football, but it’s not actually the real teams. We’re actually THE Padres playing THE Dodgers, and that’ll appeal to real fans.

On whether we’ll see a real-life Ginny Baker in MLB in the next 20 years:
It’s about time. There’s possibilities out there that are coming up. I’d love to see it. I don’t see a reason why not. 25 years ago, nobody thought we’d have a black president and then we had a black president on television and it made people comfortable with the idea. We’re just lubing everybody up for the idea that there could be a woman playing in the majors.

What makes Kylie Bunbury ideal for her role as Ginny Baker?
First of all, she’s a fantastic actress. She takes your breath away when she comes on screen. She’s powerful. I’ve seen the pilot four times and there’s one scene where she makes me cry every time. My first question to [Pitch showrunner] Kevin [Falls] when I heard about the project was, “Can she pitch?” And he said, “Yup.” And when I first saw her, I said “Okay, that’s it. She can pitch.” The mechanics are there. Obviously, the velocity isn’t there, but her accuracy is and the fact that she can throw a screwball is great.

On preparing for his role as veteran catcher Mike Lawson:
I loved catching. I’ve never been behind the plate. I’m doing my own catching. I have the scars to prove it [Gosselaar shows bruises on his core]. I’m working with [former MLB catcher] Chad Kreuter and A.J. Ellis [Dodgers] may be another guy I work with. 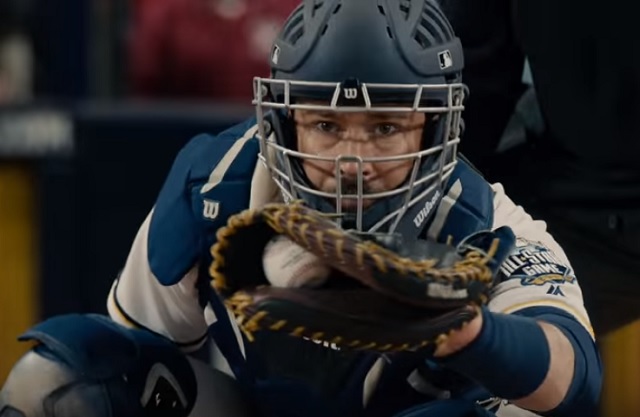 On the importance of a catcher on the field:
It wasn’t the position that drew me to the role, it was more the character itself, being the captain of the team, the veteran, and the relationship that I have with Ginny Baker. But being a catcher, to be honest, I didn’t really know how involved the catcher really is. As a casual watcher of the game, you don’t realize exactly the intricacies of the players, but the catcher is like an on-field coach. If I was 12 years old and someone said what position would you want to play, absolutely it would be catcher if I had to go back. When I was growing up, I always wanted to play first base or shortstop. Most people don’t want to be behind the plate and get beat up, but I love that part of this role.

On the “ass slap” during the audition process:
I’m fighting for the job. Kylie has the job. There’s another guy right outside. It’s such an awkward situation. It’s like going for a job interview, and you see the other guy also interviewing and you hear them. It says, ‘I slap her ass’ in the script. But I didn’t have the job! And I slapped her ass.

On what being a game changer means:
“Game changer” is someone who has progressed not only the game they’ve chosen, whether it’s baseball or a yoga class, it’s making an impact in your world. When you see someone like Ginny Baker pitching for the first time, she has changed the game, she’s a game changer. Someone who is an RN in a busy emergency room, end of the day she’s saved lives, same with firemen, policemen, schoolteachers. Game changers. Anyone can be a game changer; it’s how you get there.

View all posts by Amanda Rykoff