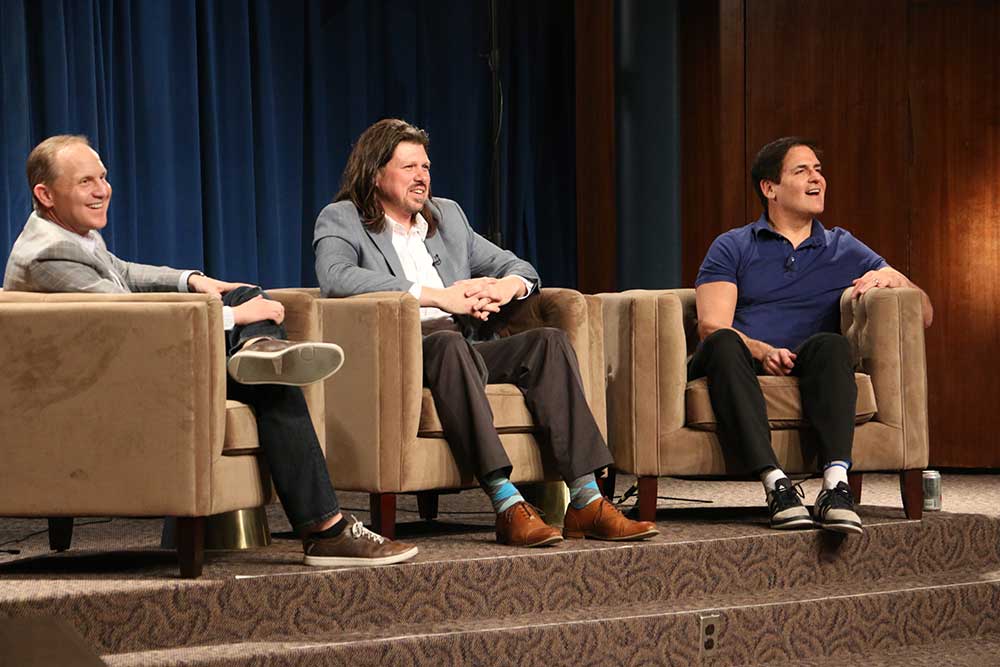 While Dallas Mavericks’ owner Mark Cuban and Fox Sports president Eric Shanks both have vested interests in the success of virtual reality in sports, their comments on it are still interesting, and they’ve already put their money where their mouth is.  Cuban and Shanks were guests at Indiana University (Cuban’s alma mater)’s National Sports Journalism Center’s Sports Media Week last Thursday, and appeared on a panel with NSJC director Galen Clavio to talk sports and technology. Their comments on virtual reality were particularly notable:

Cuban, for example, has been a backer of virtual reality and other technology to help fans put themselves on the field or court. IU’s new Mark Cuban Center for Sports Media and Technology, launched last year with a $5 million contribution from Cuban, introduced virtual reality to IU basketball fans with Samsung Gear VR headsets during a demo earlier in the week.

Still, Cuban said that virtual reality in its current state has too many problems for those not in attendance with access to the headsets. For instance, not all users will have the bandwidth on their devices to view footage taken by a 360 camera. Cuban said flaws in virtual reality offer entrepreneurs in sports media an opportunity to master the media through innovation.

Shanks was a bit more optimistic than Cuban about virtual reality and sports media during the press conference before the panel. “We are pretty enamored with the possibility of virtual reality,” he said on behalf of Fox Sports.

In addition to his virtual-reality focused IU donation, Cuban has invested in a variety of virtual-reality technologies, including iPad immersive photo app Condition One and gaming treadmill Virtuix Omni. Meanwhile, Shanks and Fox just signed a five-year deal with NextVR to broadcast sports events in virtual reality. That should be kept in mind with their comments. It’s also notable that Cuban doesn’t think current VR technology is at a peak, especially when it comes to display on phones (and he later said “Big networks can’t really give viewers exactly what they want, which is to do everything on their phone”), and it’s interesting that Shanks also said technology isn’t the be-all and end-all on the broadcasting side:

During the panel, however, Shanks told students that technological advances in sports media such as the glowing first down line, glowing hockey puck and virtual reality are no replacement for good storytelling.

“We’ve got a lot of what we call ‘toys’ in the sports broadcast industry, but sometimes it’s good to know when to put the toys down and let the moment happen,” Shanks said. “My best producers are actually the ones who do the least.”

It’s going to be interesting to see where VR in sports goes in the future. Both Cuban and Shanks are high on the technology, and the deals they’ve made are proof of that, but they also both admit that it still currently has some problems from the broadcasting standpoint. Will it prove to be an essential “toy,” and become a key part of sports broadcasts, or will it be relegated to the dustbin of poor advances with the glow puck and ESPN’s floorcam?
[The Media School, Indiana University]