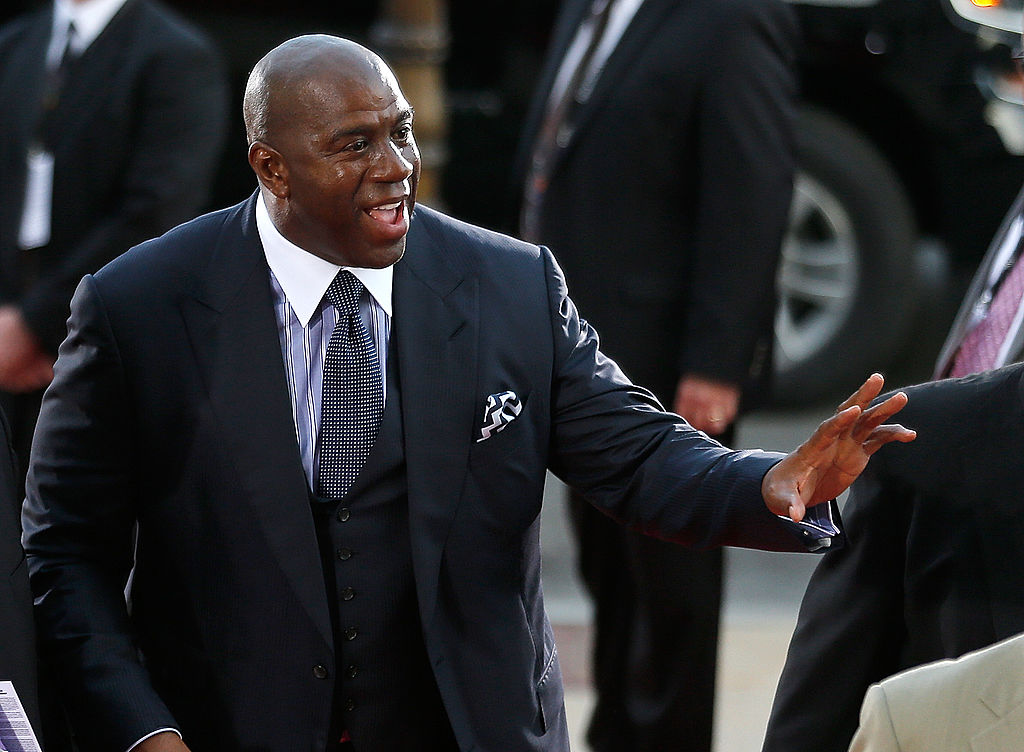 How many of you knew Magic Johnson owned his own television network? Well, it’s true and I’m not April Fools pranking you either. It’s too early for that.

ASPiRE Network was launched by the Lakers hall-of-famer in association with UP Network to provide family friendly programming for African-Americans. After Comcast merged with NBCUniversal, the cable operator promised the federal government they would launch 10 new networks owned by minorities and Johnson’s channel was a product of this agreement.

As the network’s owner, Johnson can do whatever he wants and that includes giving himself a talk show according to The Inquistr (because no other network in their right mind would do so):

Today, the ASPiRE network announced that the NBA legend will be starring in his own original talk show, Magic in the Making. Premiering on Monday, March 28, Johnson’s first guest will be Misty Copeland, the American Ballet Theatre’s first African-American female principal dancer.

“It is with great pleasure that we present this special presentation of Magic in the Making, a show that allows me to sit down and have candid, honest and heartfelt conversations with prominent, successful, extraordinary African-Americans,” said Johnson in the press release.

For those of you older than 25 reading, you’ll recall that this is not Johnson’s first rodeo in the talk show circuit. Johnson had a disastrous tryout in the 1990s when he hosted a syndicated late night show for four months. I’m only 22 so even though I was born at the time, I was more in tune with Nickelodeon than I was with syndicated talk shows. But through the magic of YouTube, I’ve been granted the unfortunate opportunity to watch cringeworthy clips from The Magic Hour such as this.

Considering Johnson’s struggles as a studio analyst on ESPN along with The Magic Hour‘s awkwardness and bad ratings, it will be interesting to see how this show goes for the Michigan State basketball legend. But since no one has ever heard of this network and the network’s biggest star is its owner, why not give him some type of on-camera role?

ASPiRE Network and its sister network UP Network recently signed a deal with DirecTV and AT&T but it is still not carried in enough homes to be rated. The network faced scrutiny in 2013 after The Daily Caller accused Johnson of simply being a figurehead with little to no involvement with the network’s operations. A lack of involvement would defeat the purpose of the deal the federal government made with Comcast.

So far, Aspire has been the only network launched as part of the program. And insiders are doubting whether Johnson – who led an ownership group that purchased the Los Angeles Dodgers shortly before Aspire’s launch in June – was ever really interested in creating diverse television at all.

Chairman and CEO Johnson has visited the Atlanta-based offices of Aspire on no more than two ocassions. Representatives of his company Magic Johnson Enterprises, the principal owner of the network, have visited Aspire no more than four times, according to a source.

A petition even went around saying that ASPiRE wasn’t really black-owned and was actually run by a white-owned company, which if you think about it is basically true.

The network currently reaches 21 million subscribers and has recently increased their original programming to include college sports from historically black colleges and universities.